How to Watch NFL Games Without Cable 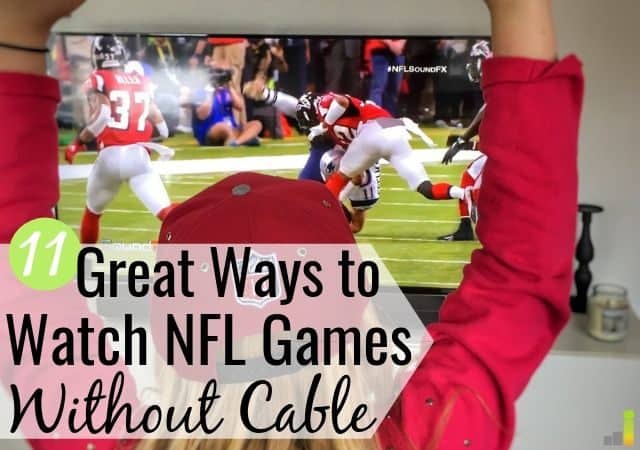 If you’re a fan of the NFL who wants to cut the cord, you may be wondering how to watch NFL games without cable in 2o2o and still catch all of the action. Streaming services are the answer.

The average monthly cable bill is north of $200, but you don’t need to pay that to watch your favorite team. If you want to know how to legally watch the NFL without cable, this guide shares the best streaming providers to use for games.

Thursday Night Football is a bit more complicated as some shows air exclusively on the NFL Network, though most simulcast on Fox and Amazon Prime. If you plan to cut the cord and love football, it’s essential to find a streaming service that allows you to watch the most action.

How to Watch NFL Games Without Cable

There are various ways to watch NFL games live, but not all are equal. Here are the top services to watch football this fall.

Hulu with Live TV is one of the top choices to live stream NFL games without cable and save loads of money. The service offers one base package, which costs $64.99 per month for 65+ channels.

Key for football lovers is the service gives you access to the ESPN family of channels, as well as Fox Sports. Hulu Live also provides access to local networks in most locations. The one drawback to Hulu Live is that they don’t carry the NFL Network.

However, that should only mean you’re out a game or two of Thursday Night Football that does not live stream on Amazon Prime or Fox. Hulu makes up for this by offering the SEC and ACC Networks for those who love to watch college football.

Hulu with Live TV offers a cloud-based DVR with 50 hours of recording ability. You can upgrade to 200 hours for $9.99 per month. You can also stream on multiple devices at once to help scratch your NFL itch.

Whereas Hulu Live only offers one package, Sling TV allows you to fully customize your channel offerings with two base packages – Orange and Blue, each costing $35 per month. Sling Orange offers ESPN, and Blue offers Fox Sports.

You can combine the two, Sling Orange + Blue for $50 per month to receive all the base channels the streaming service offers – 50+ channels.

The one drawback is Sling TV offers minimal local networks. You receive Fox and NBC in some markets, and no CBS. If that’s not an issue, Sling has a sports add-on package for $11 per month that includes NFL Red Zone, ACC Network, and Pac-12 Network.

Sling has a basic cloud-DVR setup with 50 included hours. You can upgrade to 200 hours for $5 per month.

fuboTV is one of the more unique services to stream NFL games without cable. The service carries up to 200 channels, but it also comes with a more expensive plan; its base plan starts at $64.99 per month.

Cost aside, the streaming provider is a good option to watch NFL games. The base package includes the full suite of ESPN channels, Fox Sports, the NFL Network, and locals in many, though not all, locations.

If you enjoy niche sports, fuboTV is worth considering as it offers various add-on packages to get access to sports like biking and tennis. fuboTV has a cloud-based DVR that allows you to record 30 hours of content. You can upgrade to 500 hours for an additional $9.99 per month.

Read our review of the fuboTV channels to learn more.

Vidgo is a newer player in the cable alternative space. However, it’s a suitable choice if you want t0 watch NFL games live.

Vidgo is cheaper than other services, with the base package costing just $40 per month. This gives you access to all of the ESPN Networks, Fox Sports, and the NFL Network. You also get college-focused channels like the ACC Network, the Pac-12 Network, and the Big Ten Network.

You can upgrade to the Plus package for an additional $10 per month and receive all of the regional Pac-12 channels.

There are two drawbacks with Vidgo. You only receive ABC and Fox, and there is currently no DVR. If you purchase a digital antenna, this will take care of local channels, but not having a DVR may be a deal breaker.

Formerly known as DirecTV Now, AT&T TV Now is another option to watch NFL games without cable. The platform has several packages to choose from, starting at $55 for 45 channels. Unfortunately, it’s easy to spend even more as the higher-end packages run over $100 per month.

As a part of the base $55 package you receive ESPN, Fox Sports, and locals (only Fox, CBS, and NBC) in some locations. AT&T TV Now makes up for that with a robust cloud-DVR of 500 hours.

The pricing of the packages makes AT&T TV Now a tough recommendation for football. Most people will be better served by considering Hulu Live or Sling TV.

Read our review of AT&T TV Now to learn more.

You get all local channels and an unlimited DVR that lets you keep content for nine months.

This is perfect for the NFL fan who wants to catch all of the action and have peace of mind they can record content.

There is one significant drawback to YouTube TV – cost. It has one base package that recently increased to $65 per month. YouTube TV has a lot going for it, but the cost is a big detractor as you can get much of the same with Hulu Live.

Read our YouTube TV review to learn more about this streaming service.

Channels included: ESPN and Fox Sports family of networks and all local channels

If you want to know how to watch NFL games for free, an antenna is your only true choice after the one-time purchase. This lets you access all local networks so you can watch games on Sunday, as well as Thursday Night Football that’s simulcast on Fox.

An antenna is the cheapest way to get NFL games or any network show. After an affordable one-time cost, you get any local content, in HD, for free.

Here are some of the best digital antennas on Amazon to consider if you need to cut the cord, with 1byone, Wsky, and Antennas Direct being among the best. If you simply want access to games broadcast in your area an antenna is a perfect solution.

NFL Game Pass is one of the best ways to watch NFL games without cable, as long as you don’t mind waiting to watch games. The service provides full games that are on-demand. Live coverage is not offered during the regular season, though it is during the pre-season.

You get access to all 256 regular season games, without commercials.

The service costs $99 per year and also includes games dating back to 2009, DVR functionality, coaches’ film, and the entire NFL Films library.

The NFL airs many Thursday Night Football games on the NFL Network. Many streaming providers don’t carry that channel, but they simulcast most of the games on Amazon Prime.

If you already have Prime, this lets you watch NFL games without cable for free as you stream action directly through the Prime Video app. If you don’t have Prime, you can get it for $119 per year, which also gives you unlimited two-day shipping on orders.

Amazon does not currently air other games, so this only works for Thursday Night Football.

CBS All Access is a standalone service for fans of the network. With the service you can watch content from CBS on-demand, and live stream shows – including NFL games airing on the network.

*Related: Love sports and want to cut the cord? Check out our guide on how to watch ESPN without cable and save $50+ per month!*

The service is good for people who may not want to deal with an antenna, or only want locally-aired games. The service is just $5.99 per month and gives access to other CBS-owned networks like Comedy Central, Nickelodeon, and the Smithsonian Channel.

It may seem odd to see NFL Sunday Ticket in a list of ways to stream NFL games without cable. However, it is a real option, for some people.

If you live in an area where DirecTV is not available AND you’re a student, you qualify to get the service NFL Sunday Ticket U. The service costs $73.49 a month and lets you watch every out-of-market Sunday game live.

The cost is a significant drawback, with it costing nearly $300 for the four months of the season. Unless you must watch all NFL games, there are much better options.

How to Watch Sunday Night Football Without Cable

All Sunday Night Football games air on NBC. You need either a digital antenna to get access to local channels or a streaming service that offers NBC.

A digital antenna is the most affordable option, but if you want to watch the NFL online, Hulu with Live TV or YouTube TV to guarantee the ability to watch. Sling TV may also be a choice, depending on where you live.

How to Watch Monday Night Football without Cable

Monday Night Football is a must for most football fans. The game airs on ESPN, so you will need a streaming service that carries the channel to stream games.

All of the streaming providers on this list, the first six, carry ESPN so it really comes down to the platform you prefer to watch Monday Night Football. 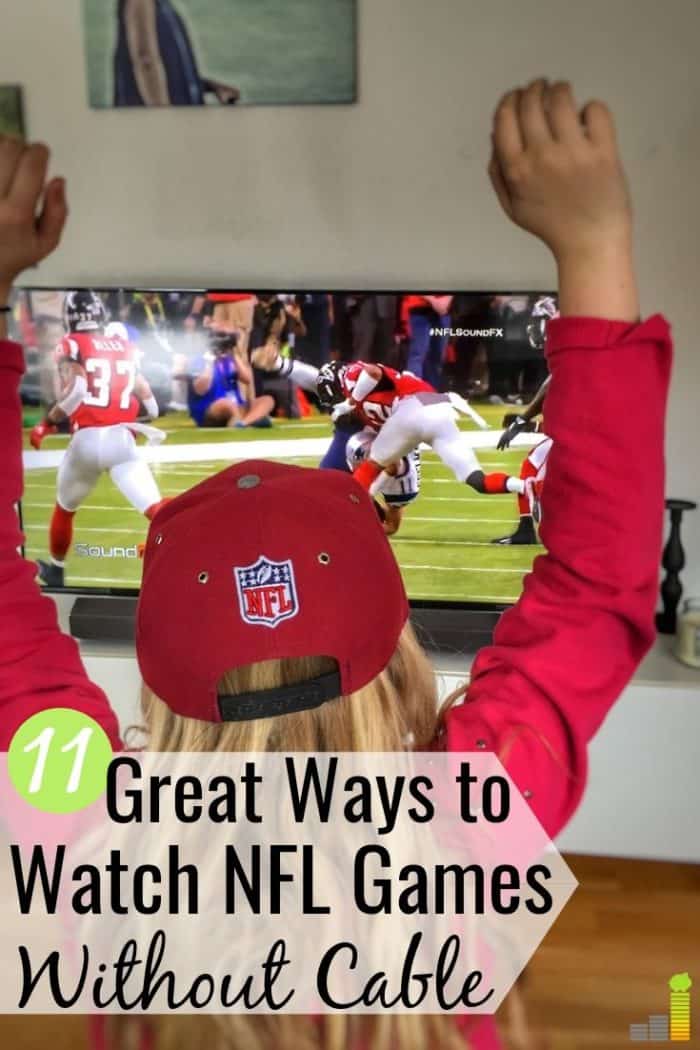 How to Watch Thursday Night Football Without Cable

Thursday Night Football airs exclusively on the NFL Network, though they simulcast most of the games on NBC or Amazon Prime. If you don’t mind missing a couple of games, you will be fine with a digital antenna or Amazon.

However, if you don’t like to miss a Thursday night game, you will need a streaming service that offers the NFL Network. In that case, fuboTV and Vidgo are your only options.

It’s used to be the only way you could watch football was with a cable contract. That is no longer the case. Most streaming platforms carry ESPN and you can get local networks with a digital antenna, if they’re not offered by the streaming service.

The best part is no service requires a contract so you can cancel at any time. If you want to watch live NFL games without paying $200+ per month on cable, you can do it and pocket the savings for other needs.

How do you watch NFL games without cable? Has the thought of losing the ability to watch sports the way you like kept you from cutting the cord? What other channels do you feel like you can’t live without?