Paramount Plus is a rebrand of CBS All Access, with live sports and original content. Read our review to see if the affordable streaming service is for you.

If you’re tired of paying an expensive cable bill each month, the streaming space offers ample opportunities to save. With seemingly every production company having their own platform today, one stands out from the crowd.

Paramount Plus, which replaced CBS All Access in March 2021, offers a unique combination of live streaming content and on-demand movies and shows.

Priced at $10 or less per month, it could be a great option for cord-cutters who love CBS content, Star Trek, sports, and more.

Paramount+ is a stand-alone video streaming service that offers a mix of on demand content, a huge library of movies, live sports, a live stream of your local CBS station, and original TV shows and movies.

The Paramount streaming service replaced CBS All Access in March 2021 after Viacom and CBS merged.

It’s similar to Peacock and Discovery+ in that it offers original shows and movies plus content from popular television stations with limited commercial interruptions.

The platform is different because, unlike similarly-priced streaming services, the Paramount Plus app includes live TV. This makes it a unique option for those looking to cut the cord on cable.

How Much Does Paramount+ Cost?

The ViacomCBS streaming service is relatively inexpensive. There are two plans you can choose from.

Those two plans are:

Essential is the more affordable plan and doesn’t include live TV. Premium does include four channels of live TV. Keep in mind that there will be commercials on those live channels.

*Related: Read our Discovery+ review to learn more about the new streaming service.*

Unlike cable, there’s no contract or fees. You can start and stop your service at any time, cancelling whenever you want.

Paramount Plus offers live streaming at no cost for seven days when you sign up for their free trial.

This is a great way to test the service and see how well your internet connection streams live sports and other content. You can also make sure the Paramount app has the content you want.

Since every episode of every show is not available, you’ll want to use your free trial to search for shows and movies to see if you can get what you want.

What Do You Get With Paramount+?

It includes content from networks such as BET, CBS, Comedy Central, MTV, Smithsonian Channel, and a substantial library of movies from Paramount.

TV Shows and Movies on Paramount+

If you’re looking for variety, this streaming service offers plenty. However, not every episode of every show is available, so use the free trial to search for your favorites first before committing to the monthly payment.

If comedy is your thing, you’ll have access to:

For MTV fans, series include:

To keep the kids entertained, you’ll find shows like:

You’ll be able to watch series including:

The app calls out the hugely popular Star Trek shows and movies separately, making them easy to find. Its “Space: The Final Frontier” collection includes:

Along with the above options, you can watch Star Trek: The Original Series and six other series related to the space franchise.

On-demand access is offered to thousands of movies. Browse for titles in the following categories: Popular, Action, Comedy, Documentaries, Drama, Thriller, Kids and Family, and A to Z.

In addition to original content, subscribers will enjoy exclusive access to new Paramount Pictures releases. Some films will debut briefly in theaters and then be released directly to Paramount Plus.

Examples include Mission: Impossible 7 and Paw Patrol: The Movie.

Paramount+ has said it will launch 50 original series and movies within its first two years. Some of that includes spinoffs of popular TV series like Yellowstone, along with kids movies and plenty of other titles.

Although the service does have the Taylor Sheridan produced 1883, the service is not an option to stream Yellowstone online.

You must have Peacock to get the series. Read our comparison of Paramount+ vs. Peacock to learn more about how the two services stack up.

When you sign up for Paramount+ you now also receive access to all SHOWTIME content. Previously you could only get the two together during a promotional period.

The new bundled service combines the two libraries within the Paramount+ app. All SHOWTIME content is commercial free, regardless of which plan you choose.

Does Paramount+ Have Live Channels?

In an effort to differentiate themselves from other on-demand services, you can now get live channels on all Paramount+ plans. Those channels are:

You can expect content to be similar to what you can find on Pluto TV, which ViacomCBS also owns.

Can You Watch CBS Live on Paramount+?

Yes, it is possible to watch your local CBS affiliate on Paramount+. To receive access you must have a premium subscription.

You receive four live CBS channels with the subscription. Those are:

The live sports offering includes a variety of options, including NHL, PGA, and live soccer games from the Champions League, Europa League, and Women’s League.

You can also watch March Madness games aired on your local CBS network. Read our guide on other ways to stream March Madness online if Paramount+ doesn’t work for you.

Does Paramount Plus Have NFL Games?

Yes, it is possible to watch NFL games online via the streaming app. You can get live NFL games with either of the two plans.

However, you can only watch games airing on your local CBS affiliate. CBS carries AFC games, so you can expect to watch the AFC game showing in your area. 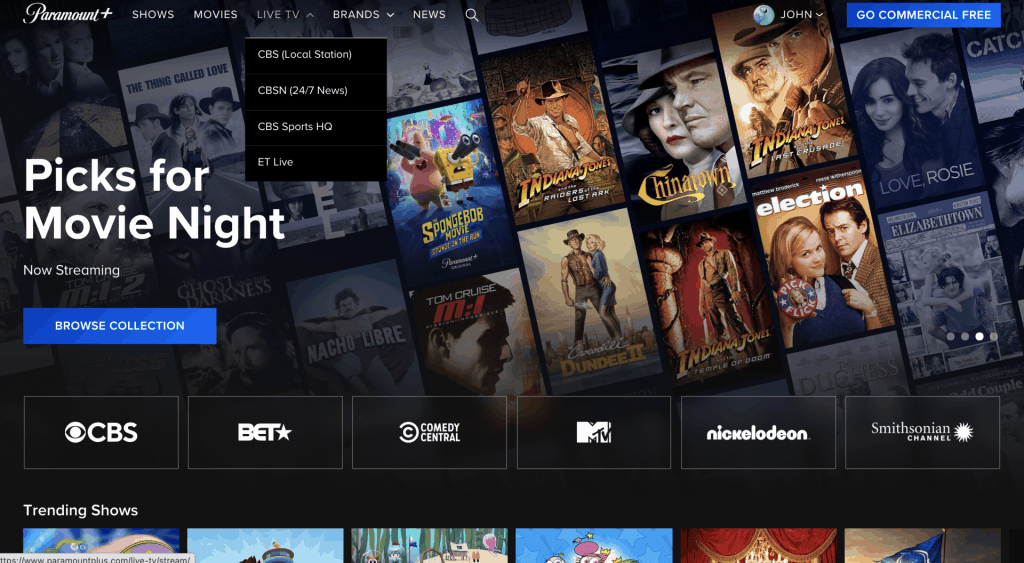 Expand your access to local channels with an antenna like the Mohu Leaf. For a one-time cost of $50 or less, you can enjoy all your local channels for free, for life.

We’ve used Mohu antennas for years and they work great. If you want access to all NFL games, NFL+ could be a good solution.

It allows you to watch all games on a mobile device, regardless of where you live Read our review of NFL+ to learn more.

Additionally, if you can also watch college football without a TV provider if you choose the premium plan. This will give you access to games broadcast on your local CBS affiliate.

When CBS and Viacom merged in 2020, CBS All Access was rebranded to Paramount Plus.

While it remained mostly unchanged, the new service includes lots of movies and shows from Viacom-owned brands like MTV, BET, and Smithsonian Channel.

If you subscribed to CBS All Access, your account was automatically upgraded to a Paramount+ account. The CBS All Access app was also replaced in all streaming platforms and TVs with the Paramount Plus app.

When you launch the app, you’ll see a layout that’s pretty similar to other streaming services. Along the top, you can filter your content by TV shows, movies, live TV, brands, and news.

You can search for anything by name using the magnifying glass icon. Then, you can click on your profile over on the right and add up to five additional profiles.

It’s important to note that you can only have three simultaneous streams at a time even if you have six different profiles.

It’s also possible to enable parental controls to filter content for both older and younger kids.

When you click on a show tile, you’ll see that show’s page, where you select a season and episode, and if there are any access extras like clips, outtakes, and other things. 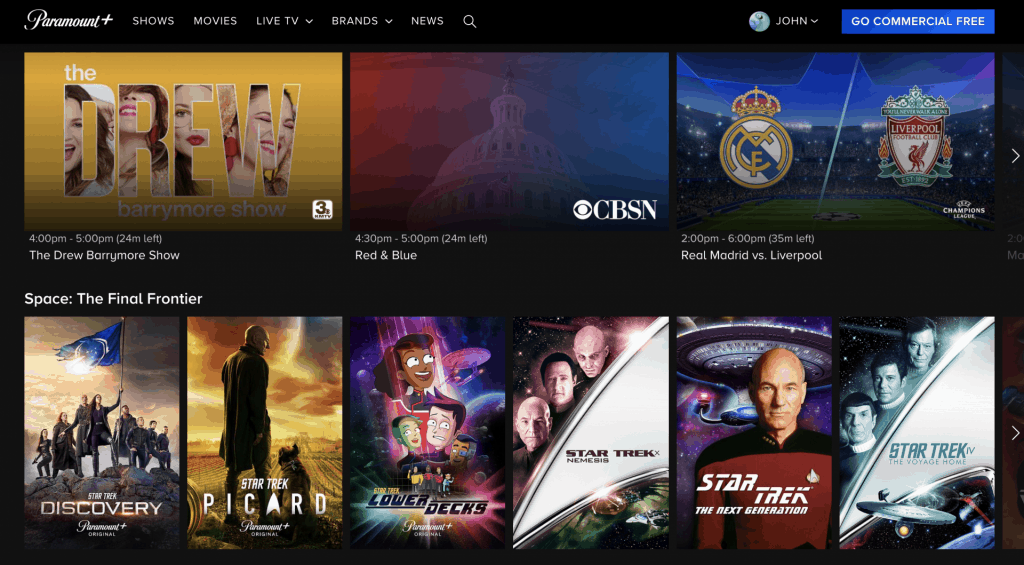 You can also click Movies from the top menu and see a screen of movie tiles that you can click to watch. Movies are organized into Action, Comedy, Documentary, Drama, Thriller, and Kids.

While there is no DVR with this streaming service, there is plenty of on-demand content to play, pause, stop and re-watch whenever you want.

How Bad Are the Ads on Paramount+?

Commercials are a necessary evil of most streaming content services. Nearly every streaming service will break up their content with ads to keep the price down.

Most commercials are between 15 and 90 seconds long and occur in batches of two or three every 30 minutes. Hour-long shows may have between four and five commercial breaks.

If ads are a deal-breaker for you, try the Paramount+ Premium plan free for seven days. After that, pay $9.99 a month to watch all but the live content commercial-free.

All you need to watch Paramount+ is an internet connection and a laptop, desktop, tablet, smartphone, device, or smart TV.

Essentially, if it has a screen you can use it to watch content on the platform.

Before signing up for Paramount Plus, make sure to review the pros and cons to ensure the service is right for you.

No service is perfect, but for CBS fans, this is an affordable option to stream live sports, news, and exclusive content along with a decent selection of popular movies.

Get some live TV and sports, plus thousands of episodes of popular TV shows for only $5 per month, and no contract.

As is true of any streaming service, whether or not Paramount+ is right for you comes down to what you want to watch and how much you want to spend.

If there are just a few series you want to watch on Paramount Plus but don’t see yourself watching it year-round, sign up when the series you’re interested in drops its new season. Then, cancel it once you are done watching.

Unlike cable, you can start and stop your service whenever you want. This is a great idea and an excellent way to keep your streaming budget in check.

What do you look for in a streaming service? How much do you spend on cable each month?