How to Watch March Madness Without Cable: 5 Top Choices

You don't need a pricey cable contract to watch March Madness. Here are 5 streaming services that let you watch the action and save $100 a month. 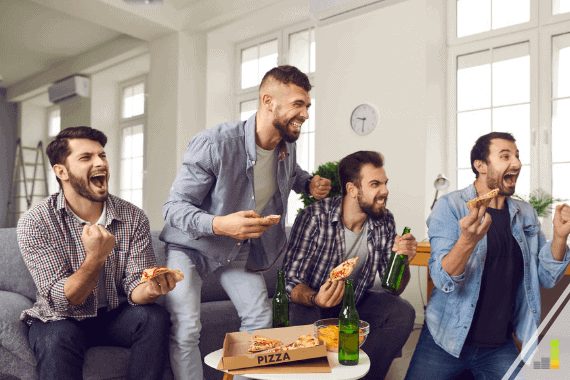 It’s that time of year again. The NCAA men’s basketball tournament is about to return.

This tournament is unlike many events in sports. Over the span of several weeks, you get to watch 67 action-packed games.

Thankfully, you don’t need a pricey contract to catch all the action. You can watch March Madness without cable, and our guide shares the best ways to see every game.

What Channel is March Madness 2023 On?

You might think the tournament is on ESPN. That is not the case.

The tournament is jointly carried by the following four channels:

While many no-contract providers let you get ESPN, that’s not the case with the above channels. For example, fuboTV is a top provider for sports fans, but they don’t currently carry Turner networks.

Fortunately, there are several subscription streaming services that carry Turner channels, allowing you to watch the men’s tournament.

If you want a premium replacement to cable, Hulu Live may be a better choice. Read our fuboTV vs. Hulu Live analysis to see how the two platforms compare.

A hefty cable bill is not necessary to get popular sports channels. As a preview, here are the services that cord-cutters can use to stream March Madness without cable and avoid missing any of the games.

Each service works with a vast array of compatible devices. All the device needs is a screen so that you can watch games.

Here are the top services to watch March Madness 2023 without cable.

Sling TV is the most affordable live TV streaming service to get the men’s NCAA tournament. The provider has two base packages, including Orange and Blue.

Both cost $40 a month and offer 30 and 45 live TV channels, respectively. The main difference is that Orange carries ESPN, and Blue carries Fox Sports 1 (FS1).

If you want to watch the tournament, select the Blue package. This subscription includes all of the Turner networks you need.

The one drawback to Sling is that it doesn’t include CBS in its list of channels. It carries FOX and NBC in select markets, but not CBS.

You can rectify this shortcoming with an over-the-air antenna, like the Mohu Leaf or a subscription to Paramount+. The latter is reviewed later in this post.

If you choose the Mohu, use the code FRUGALRULES10 to receive ten percent off your purchase.

Aside from the minor inconvenience of not having CBS, Sling is a terrific option to watch the tournament.

You get three simultaneous screens, a base 50-hour cloud DVR, and they typically have a money-saving promotion for new users.

If you like an à la carte approach to channel packages, Sling is best for you. Simply use its service optimizer tool to enter the channels you want, and it’ll direct you to which add-on packages you need.

If streaming live sports is important to you, DIRECTV STREAM is a good choice. Not only does it carry CBS and all of the Turner networks, but it’s also carriers lots of regional sports networks (RSNs).

The base package, Entertainment, has 65+ available channels. This package is sufficient to watch March Madness as it has the four necessary networks.

Only select higher-tier plans if you need premium channels.

Hulu Live is another excellent choice to get March Madness without a cable provider. The no-contract service carries CBS in addition to the three Turner networks.

This platform matches DIRECTV STREAM in terms of price, charging $69.99 per month. Their recent rate hike folded in Disney+ and ESPN+ into a Hulu Live plan, along with its 80+ list of channels.

All of the content on ESPN+ makes Hulu Live an even better choice to watch sports without cable. Hulu Live also includes an unlimited DVR, which allows users to record as much as they want and skip commercials.

You also only receive two simultaneous streams, and the service doesn’t offer a free trial.

Read our Hulu with Live TV review to learn more.

YouTube TV is one of the best live TV streaming services to watch March Madness without cable. The streaming giant offers all of the channels you need to watch the tournament.

The cable alternative costs $64.99 a month, and you can have up to six accounts per household. It also offers 4K streaming for an additional $9.99 per month.

*Related: Are you a basketball fan but want to ditch your expensive contract? Read our guide on ways to watch NBA games without cable to learn how to net big savings.

The service even offers three simultaneous streams. Better yet, it offers a seven-day free trial.

Paramount+ is a perfect complement to Sling TV if you want to watch March Madness. The platform is a video streaming service that carries on-demand and original content from Paramount networks.

While it does not provide access to Turner networks, it does give you four local CBS stations when you choose its premium plan.

Here are the available plans for Paramount+:

If you pair the premium plan with Sling TV, you only need to pay $50 to watch the entirety of the men’s NCAA basketball tournament.

That’s $20 cheaper than any other choice.

This is one of the more easy-to-use platforms. Like the other streaming services, all you need is a high-speed internet connection to watch content.

The NCAA men’s tournament starts on Sunday, March 12, with Selection Sunday, at 6:00 p.m. EST. The First Four is in Dayton, Ohio, and the Final Four and National Championship are in Houston, Texas.

Here is the entire schedule:

As you can see, it’s nearly three weeks of college basketball at its best.

The channel schedule for the men’s tournament is simple to follow.

Here is the channel breakdown for the 2023 games:

In 2022 the Final Four aired on TBS. This year it’s airing on CBS, which you can access through the services in this post or via an over-the-air antenna.

How Can I Watch the NCAA Tournament for Free?

It is not possible to watch March Madness online for free. The NCAA offers a live stream from its website, but you need a cable login to access games.

You will need to choose one of the applicable cable alternatives to watch the three weeks of action. Your best bet is to choose a service that offers a free trial to see if you like it before committing to a provider.

You can stream the tournament on CBS. It’s possible to do this through either the CBS website or the CBS app.

However, you will need a login from a cable or satellite TV provider to watch games. If you have a login, you can watch games on your computer or a streaming media player if you have a smart TV.

Can I Watch March Madness on Prime Video?

It is not possible to stream the NCAA men’s tournament on Amazon Prime Video. The platform does not carry the Turner networks or your local CBS station.

While you can access Paramount+ through Prime, it would only get you games on that platform if you subscribe to the premium plan.

You don’t need an expensive contract to watch March Madness. All of the streaming services mentioned let you watch everything from the selection show to the national championship.

All you need is a streaming device and the ability to stream. Switching to a no-contract service can help you pocket $100 in monthly savings and not sacrifice live sports. That’s nothing but net, baby.

What’s one channel that’s keeping you from cutting the cord?