Tello vs. Ting – Which is the Best Cheap Cell Phone Plan?

Cheap cell phone plans are a good way to save money, but it’s hard to choose the best one. Our Tello vs. Ting review compares the top providers. 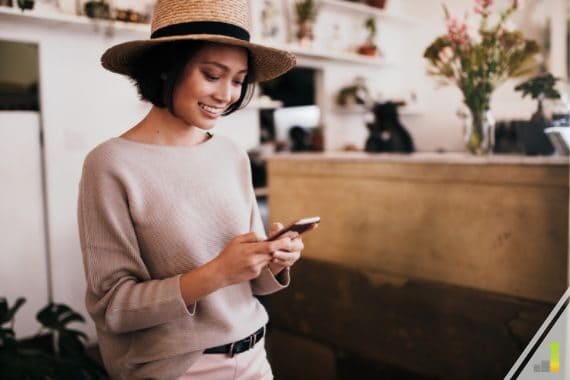 Home » Save Money » Tello vs. Ting – Which is the Best Cheap Cell Phone Plan?

If you’re sick of overpaying for your phone bill, it’s time to switch to a prepaid phone plan.

Thanks to Mobile Virtual Network Operators (MVNOs), you can find affordable prepaid plans with no contract. These help you cut costs by piggybacking off major networks like Verizon and AT&T.

Two leaders in the MVNO space are Tello and Ting. With nationwide coverage and plans that start at $10 per month or less, both companies are significantly cheaper than regular phone plans.

Our Ting vs. Tello comparison will help you pick the right provider and build the perfect phone plan.

Tello and Ting are two of the most popular MVNOs on the market. Ultimately, each company helps you save money since you only pay for the features you need.

However, some slight differences in plan prices and features might make one of them a better choice for you.

Plans start as low as $10 per month, making Ting one of the cheapest cell phone plans on the market.

There are four main Ting plans to choose from:

You can also choose Ting’s Flex plan, which costs $10 per month plus $5 per GB of data you use. If you don’t use data or use under 2GB, this is the most cost-effective Ting plan.

The company throttles data speed to 2G when you surpass your fast-data limit. However, if you want additional fast data, it’s available for $5 per gigabyte.

When it comes to calling options, Ting lets you make calls to over 60 countries. Rates are available on their website, and most countries cost $0.05 per minute.

However, it’s free to send and receive texts from international numbers.

Ting doesn’t have a money-back guarantee, but you can use its coverage map to check availability in your area.

There’s also a phone compatibility checker you can use to ensure your device works with Ting if you want to bring your own device. Between these two tools, you should know if Ting will work for you before you sign up for the service.

Ultimately, Ting is one of the best no-contract cell phone services for low-data users, and its Flex plan is one of the cheapest phone plans out there.

Read our review of Ting Mobile to learn more.

With unlimited talk and text plans starting as low as $8 per month, the provider gives Ting a run for its money in terms of affordability.

The main difference between Ting and Tello plans is that the latter has more customization. You can mix and match how much data and minutes you want in your plan.

The bare-bones, no-data plan with just 100 minutes of calling and free texting is only $5 per month. If you want unlimited talk and text, you’re looking at $8 per month.

You can also add data to your plan starting at 500MB and increase it in increments up to 8GB.

Alternatively, Tello has four pre-built plans that come with unlimited minutes and text:

As for data speed, Tello plans provide 4G LTE and 5G. Throttling drops speed to 2G after you use all of your plan’s monthly data. For the unlimited plan, throttling begins after you use 25GB.

Like Ting, plans also allow for mobile hotspotting. You can even use your minutes to call over 60 countries for free.

Tello offers full refunds on plans if you can’t use any of its features, no questions asked.

There’s still a coverage checker tool and phone compatibility checker on the site to see if Tello works in your area and for your device, but the refund policy is an extra layer of protection.

If you’re a heavy data user, Tello is slightly more affordable than Ting. They also have more flexibility than Ting, making them a good option if you’re trying to save money and don’t need much data.

Read our review of Tello Mobile to learn more.

How Much Data Does Tello and Ting Offer?

Tello and Ting are similar in terms of data plans. Both companies have zero-data plans for under $15.

However, Tello has more plan variety. You can find plans with only 500MB of data if you just use your phone to check and send the occasional email.

If you want a cheaper unlimited data plan, Tello is the right choice. But with Ting’s Unlimited Pro plan, speed throttling kicks in after you use 35GB. Tello customers with unlimited data experience throttling after 25GB.

This is a minor point, but Ting is superior if you want as much fast data as possible.

How the Mobile Hotspots Compare

Both Ting and Tello include mobile hotspotting in every plan for free. The main difference is that Ting doesn’t let you use all of your plan’s data for hotspotting, whereas Tello does.

However, for unlimited plans, Ting caps hotspotting at 18GB with Unlimited Pro. Tello cuts off hotspotting when throttling kicks in at 25GB.

If you want as much hotspot data as possible, Tello is the right choice. Nevertheless, the difference in hotspot data isn’t much better than Ting.

Does Tello Have 5G?

Tello has 5G data speeds on all its plans. Unlimited data customers experience throttling to 2G speed after they use 25GB of data in a month.

Does Ting Have 5G?

All Ting plans come with 5G data speed. Plans outline how much fast data is available.

After you use your fast data, Ting throttles speed to 2G like Tello.

Which MVNO Has Better Coverage?

Both MVNOs operate using T-Mobile’s nationwide network, so most areas of the United States should have reliable coverage.

Network coverage is a bit spottier in remote parts of the United States, but for the most part, T-Mobile coverage is comprehensive.

Ting has better coverage than Tello because it also uses Verizon’s nationwide network. When you consider this level of coverage, it’s likely you can use Ting in your area.

Can I Bring My Own Phone to Both Carriers?

Both carriers let you bring your own phone as a new customer. Alternatively, you can buy devices from either provider’s online store.

Each company carries phones from brands like Apple, Motorola, and Samsung.

The selection isn’t massive, but you can find several cheap phones ranging from $75 to $150. Ting phones have a one-year warranty, and Tello phones have a 30-day warranty.

If you want more variety, shopping for a used phone online is the way to go as long as you buy an unlocked, compatible phone.

With Tello, there aren’t any activation fees or contracts. You can bring your own phone for free. However, only Tello GSM SIM cards work.

If you buy a phone from them, the SIM card is free. Otherwise, you can buy it for $9.99 after you check phone compatibility.

Ting is fairly similar. You buy a SIM card for $1. When it arrives in the mail, you can complete the activation process.

You don’t pay activation fees and aren’t locked into a contract.

Both companies let you keep your phone number if you don’t want to get a new one. You have to contact customer support, and the transfer process can take a few days to complete.

Which Phones Work on Tello and Ting?

Any phone you buy from Tello or Ting’s store works. But, if you’re bringing your own device, ensure it’s:

This might sound complicated, but the takeaway is to use each website’s phone compatibility checker. All you have to do is dial *#06# on your phone to find its IMEI number.

After you enter your IMEI number into the compatibility checker, you will know if you can use your phone or not.

Both MVNOs are good options to help you slash your monthly phone bill. However, there are several pros and cons to each company worth mentioning.

Both carriers offer some of the best deals in the no-contract phone space without sacrificing quality coverage.

Is Ting or Tello Better?

Ting and Tello are likely cheaper than your current phone bill if you’re with a major carrier. Keep in mind that picking the right company depends on how you use your phone.

If you barely use data and want to have the best coverage, Ting is the right choice. In contrast, if you need unlimited data, Tello is more cost-effective.

Tello and Ting are two of the most affordable MVNOs on the market. If you want to save money and haven’t shopped around for cheap phone plans in a while, these companies are where you should begin your search.

Just remember to only pay for what you need and to monitor your data usage carefully. This way, you won’t blow through your prepaid phone plan and spend more than you bargained for.

What do you look for in a cell phone carrier?