Why Where You Shop For Groceries Matters

Where do you shop for groceries? Your answer could mean the difference between saving or spending more. Learn why you should shop around, even with stores. 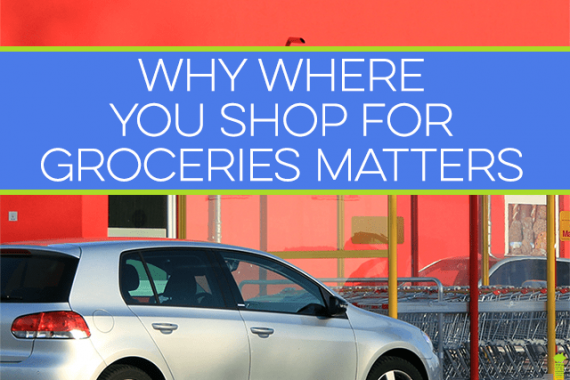 Home » Save Money » Why Where You Shop For Groceries Matters

It was only a year ago I relocated to what I thought was a less expensive neighborhood. For the most part, it is, with one glaring exception: groceries.

As many of you know, groceries can be a budget buster if you’re not careful. I had been trying my best to keep costs down in that category, mostly because my fiance loves to eat seconds (and sometimes thirds).

A recent article from US News highlighted the downsides of being a “supermarket snob,” and it got me thinking. I’ve never considered myself picky about where I shop, as I usually go where the sales are. But I know others who stick solely to a single chain for one reason or another.

If you’re guilty of this, you may want to take a closer look and be more mindful of where you shop. Here’s why.

The Grocery Store Hierarchy: Reputation is Everything

Depending on where you live, there’s a clear hierarchy going on with grocery stores. That’s because most chains have developed a reputation while intentionally marketing to certain demographics. Name any grocery store and you’ll conjure an image of their typical shopper (hello, people of Walmart).

For example, when I lived on Long Island, Stop & Shop was often regarded as the most expensive grocery store, with Waldbaums and Pathmark tying for second, and Shop Rite usually having the best deals.

Of course, within the past few years, the organic and local chains have been on the rise. Whole Foods is easily seen as one of the most expensive stores to buy food, with Trader Joe’s being the budget alternative.

Then you have the super discount stores like Aldi, ethnic stores, or dollar stores that have the bare minimum. Some people don’t want to be seen shopping there out of fear they’ll look too cheap, while others assume the items they sell are in bad shape.

Most of these stores get their reputation from price and appearance. A great example of this is Target and Walmart. Most of the time, people will say Target is the fancier (and pricier) of the two. Target stores are also generally much cleaner and more organized than Walmart.

However, does having these assumptions do us any favors? Well, I can safely say Stop & Shop was more organized and spacious 90 percent of the time when compared to the other stores I mentioned. Pathmark and Waldbaums always seemed to be in need of a renovation, and Shop Rite was just “okay.”

That perception was reinforced once when I opened a carton of milk from Pathmark and found it had gone bad. It wasn’t near the expiration date – it was brand new. Gross! That really put me off going there for a while.

Bottom line – it’s understandable to want your food to come from a clean place. But does a so-called “dirtier” looking store warrant such a low opinion that you avoid it at all costs?

I’m a big fan of experimenting when it comes to cutting costs (and being frugal in general). You never know if something is a better value or deal until you try it.

The thought of ignoring a grocery store because of its reputation has never crossed my mind. Growing up, I went grocery shopping with my mom, and she always went where the sales were. That meant sampling all the major chains within a 5-10 mile radius of our house.

That also taught me not to “look down upon” a store. While I’m not a huge fan of Aldi, I did go there twice to see if it was worth the savings. For me, it wasn’t (it was also further away), but that doesn’t mean it’s a bad store.

I was forced to experiment when we moved, as I had to figure out the hierarchy in our new location. We went to a new store each week, I scoured all the circulars, and I consulted with my mom, who has similar chains near her.

After a month or two, it was clear where the best buys were to be had. I now alternate between two stores that happen to be a minute away from each other, so when one doesn’t have something on sale, the other usually does. I don’t have to waste time traveling around, and I only have to look at two circulars each week! Worth it.

For most frugal shoppers, the decision of whether or not to go to a certain grocery store is often dependent on its prices and the quality of the items offered, not the actual appearance. We want to get the most bang for our buck.

However, I’ll admit I tried shopping at Whole Foods a few times. It was a stone’s throw away from Trader Joe’s, so I said why not.

Well, the store is nice and bright. It smells clean. It gives off “healthy vibes.” But I still hate food shopping. No store’s “atmosphere” will ever make up for that.

I’ll give you another example. A Publix recently opened up near us, and I’ve heard nothing but good things about it. Is it nice they offer to wheel your cart out to your car? I suppose, but I go there for the sales, not the service.

I don’t consider myself a “cheap” shopper when it comes to food. I like quality just as much as the next person. But the fancy pants level of a store isn’t going to make me any more or less likely to shop there. I go in and try and get out as fast as possible.

Everyone has their own preference, but it’s important to understand why you’re loyal to one store over another. If it’s simply for convenience or because it’s perceived as the best, you might want to think again.

Sure, there’s something to be said for not having to drive all over the place to buy groceries, but if another store is a few minutes away, why not explore?

It Comes Down to Loyalty

It’s not unusual to feel a sense of loyalty to certain stores after going there week after week for so many years. Both my grandma and my mom were greeted by name whenever I went shopping with them.

I think, to some extent, we’re moving away from that. I’m not particularly loyal to any brand, and I’m also not loyal to any one store. If I have a bad customer service experience somewhere, I won’t hesitate to take my business elsewhere.

Shopping around (in the literal sense) has helped me save on many occasions. I’m not saying you shouldn’t be loyal to a store, but don’t be loyal to the extent that you ignore other possibilities out there. Look out for your bottom line and always be looking for ways to lower your grocery bill.

Do you only shop at select stores? Why or why not? Do you know of anyone who refuses to shop where the best deals are? Do you shop at one specific store or do you shop based on sales?