Cheap cell phone plans are a good way to save money, but it’s hard to choose the best one. Our Mint Mobile vs. Ting review compares the top providers. 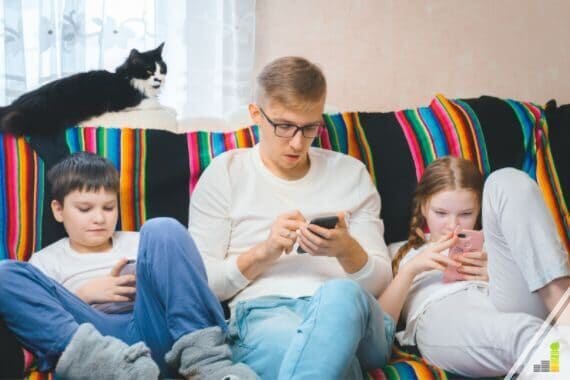 In recent years, the rise of Mobile Virtual Network Operators (MVNOs) has led to an increase in affordable phone plans.

MVNOs piggyback off of major cell phone provider networks, like AT&T, T-Mobile, and Verizon. By doing so, they provide comprehensive cell phone plans at a fraction of the cost of normal plans.

Two of the most popular MVNOs are Ting and Mint Mobile. If you’re tired of overpaying for your monthly phone bill and want to switch to a prepaid cell phone plan, our Ting vs. Mint Mobile breakdown is for you.

Ting and Mint Mobile are two leading MVNOs that offer cheap phone plans for under $20 per month.

While the former operates using T-Mobile and Verizon’s network, the latter only uses T-Mobile’s network.

Both companies provide nationwide coverage and offer various prepaid plans. This means that you only pay for the data, minutes, and perks you need.

But, choosing the right phone plan depends on your data needs and how much money you want to spend upfront.

Ting Mobile is one of the cheapest cell phone plans on the market, with plans starting as low as $10 per month.

You will also enjoy no-contract cell phone service, so you’re not locked into a year-long contract like with most major carriers.

After you use your high-speed data, Ting throttles your data to 2G speeds. This is common for MVNOs, but you can get faster data for $5 per GB.

Customers can make calls to over 60 countries. Rates are available on Ting’s website, and many countries only cost $0.05 per minute.

You can send and receive texts from international numbers for free.

There isn’t a money-back guarantee, so use Ting’s coverage checker to confirm availability in your area.

Fortunately, since you pay month-to-month, you can easily cancel your plan if the provider doesn’t meet your needs.

If you don’t use data, Ting is one of the cheapest cell phone plans around. Additionally, if you want the flexibility to buy data and customize your plan or want affordable unlimited data, Ting is also for you.

Read our review of the carrier here to learn more.

Mint Mobile is another popular MVNO that has plans available for only $15 per month if you’re a new customer.

Like Ting, Mint uses a prepaid model, so you pay upfront for your plan. However, unlike Ting, they only let you buy three, six, and 12-month plans.There’s no month-to-month option. But, they do have a family plan – called The Modern Family Plan. It lets you get multi-line pricing, with only two lines, and get the lowest available prices.

All plans include unlimited talk and text, hotspots, and 5G or 4G LTE depending on your location and device.

Pricing depends on Mint Mobile’s first-time customer bonus, how many months you prepay for, and how much data you want.

The first-time customer offer makes Mint Mobile incredibly affordable for your first three months. Furthermore, the more you prepay, the better value you get, especially for unlimited data.

When you reach your data limit, Mint Mobile throttles speed to 2G. For unlimited plans, throttling begins after you surpass 35GB in a month.

Customers get free calling to Canada and Mexico. You can also call over 160 additional countries, and rates are available on Mint Mobile’s website.

If you’re willing to prepay for at least three months of your plan to save money, Mint Mobile is for you.

Plus, with the new customer bonus, Mint Mobile has incredibly cheap phone plans. Its unlimited data plan is also cheaper than what Ting offers.

There’s a seven-day money-back guarantee as well, so you can try Mint Mobile without any risk of being stuck with a three-month plan you don’t like.

Read our review of the service here to learn more.

How Much Data Does Mint Mobile and Ting Offer?

Both Ting and Mint Mobile offer 5G speed and throttle users to 2G after certain data consumption. This means speed isn’t a differentiating factor between the providers.

However, Ting is slightly better for low-data users. If you don’t use data, your bill is only $10 per month.

Additionally, you can buy 1GB of data for $5 compared to $10 per gigabyte with Mint Mobile. The 5GB per month plan is also affordable.

But, Mint Mobile is superior to Ting if you’re a serious data user, especially if you pay upfront for six months or a year.

How the Mobile Hotspots Compare

Mint Mobile and Ting plans both include mobile Wi-Fi hotspots This allows you to connect to the internet with other devices through your smartphone while on the go.

Ting plans state how much data you can use for hotspotting. You can get up to 18GB of data with the Unlimited Pro plan for $55 per month.

In contrast, Mint Mobile lets you use all of your monthly data on hotspotting. However, the unlimited data plan only lets you use 5GB, which is less than most Ting plans.

Which MVNO Has Better Coverage?

You can check a coverage map on each website to see if you have 5G speed or coverage. However, unless you’re in a very rural area, you shouldn’t experience coverage issues.

For international coverage, Mint Mobile is slightly superior and supports calling to more countries. It also provides free calling to Canada and Mexico.

Can I Bring My Own Phone to Both Carriers?

Both carriers let you bring your own phone as long as it’s:

The easiest way to check phone compatibility is to use each website’s compatibility checker. If you dial #06# on your phone, it displays an IMEI number.

You can enter your phone’s IMEI number on Ting and Mint Mobile to see if your phone is compatible.

Signing up for Ting or Mint Mobile is straightforward with compatible phones. After creating an account on either website, you need a SIM card.

Mint Mobile sends you a SIM card for free once you purchase a plan. With Ting, you buy a SIM card for $1 and complete the activation process by choosing your plan once you get your SIM card in the mail.

Both Ting and Mint Mobile let you keep your phone number or create a new one. Number transfers take a day or two to complete.

If you don’t have an unlocked phone, you can buy a phone from either company when signing up.

Both companies include a one-year warranty on phones. You don’t pay activation fees for new or used phones either.

Which Phones Work on Mint Mobile and Ting?

Generally, most unlocked GSM phones are compatible with Mint Mobile and Ting. Using each company’s compatibility checker is the best way to see if your phone works.

As for specific phones, both providers work with numerous phones from popular cell phone brands like:

Mint Mobile sells more phones than Ting, but compatibility is largely the same for both companies.

Just remember to ensure your phone is unlocked, especially if you buy a used phone to sign up for Ting or Mint Mobile.

If you’re struggling to pick a winner in the Mint Mobile vs. Ting debate, considering the pros and cons of each company can help you choose the right MVNO.

Is Ting or Mint Mobile Better?

Chances are, both Ting and Mint Mobile can save you money on your phone bill if you’re currently in an expensive contract with a major provider.

But, choosing between Mint Mobile or Ting depends on your cell phone needs. You’ll need to evaluate plan prices and features for both options.

Because of its zero-data plan and cheap data top-ups, Ting is better than Mint Mobile if you don’t use a lot of data.

If you’re only using a few gigabytes of data per month currently, you can likely find a Ting plan that’s $25 or less per month.

However, Mint Mobile is better than Ting if you need more data and can spend more upfront.

Look through your previous cell phone bills and data usage to see how much data you need. Once you know your needs, you can pick the clear winner between Ting vs. Mint Mobile and save more money each year.

Prepaid plans with no contracts are one of the most effective ways to slash your phone bill. With Ting and Mint Mobile, you can likely save money while still enjoying reliable coverage and 5G speed.

Just remember to monitor your data usage. MVNOs help you save money, but your savings dwindle if you blow through your data and are constantly buying more.

Choose a flexible Ting plan, or find an affordable Mint Mobile plan and stop overpaying for your cell phone service.

How much is your monthly cell phone bill?