What Could You Do With An Extra $470 Per Month? 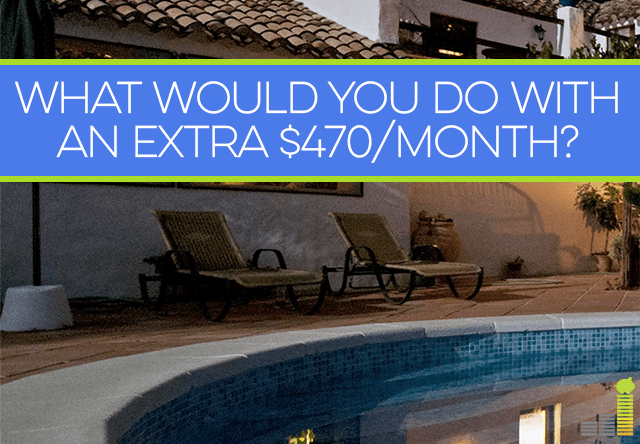 Whether or not you live by a budget, you can probably think of at least one thing you could do with some extra money each month. I think it’s fun to sit back and dream about what you might do with that extra money – depending on your situation I guess. 🙂

Well, today we’re going to talk about what you could do with an extra $470 each month. I know it’s a relatively odd amount, but hear me out as I have my reasons.

Car Loans Are On The Rise

If you’re wondering where or how I came up with the $470 amount it’s from one source – the average car payment we have in the United States. Car loans are nothing new. Many of us have had them, myself included – though I am planning on changing that with future car purchases. I’ve written about having a car loan a number of times, so it’s really nothing new.

According to Reuters, auto sales are healthily beating estimates and were on pace in 2014 to be the best year for auto sales since 2003. Many of those sales are relying on auto loans as the average sales price is coming out to nearly $34,000 with an average loan of $28,000 or a $470 monthly car loan. While other types of debt like credit cards and mortgages are still below what they were when the financial poop hit the fan a few years ago.

The Goal Should Be Growing Wealth

I don’t know about you, but I hate debt. I want to do anything I can to avoid taking on more debt. Aside from being obligated to someone, one of the biggest reasons I hate adding more debt is that it keeps you, generally speaking, (I know some debt can be used to your benefit like real estate) from growing wealth. That should be our ultimate goal – to grow our wealth.

This is not to say that having a car payment is a bad thing. Many need a car and it isn’t feasible for them to save up tens of thousands of dollars to buy a car outright. Still, buying a car shouldn’t require you to throw common sense out it’s rear window. It should be purposeful and done with the idea of getting value.

When I read quotes like I saw on Yahoo Finance that an SUV is the new starter home, it shows me our view is off. However, with the ease of access to car loans, many who buy cars today are saddling themselves with a payment for something that will return nothing in value. For most new car buyers then, their purchases are not doing anything to benefit their long term financial picture.

As we’re strongly considering buying a new to us car in the near future, seeing what the current average car loan is got me to thinking what we could do with an extra $470 per month as opposed to giving it to someone else for our shiny new to us car.

So, I took a look at our budget to see what we could do with an extra $470 per month. Taken over the year, that would come out to $5,640 so it would be enough to max out one of our Roth IRA accounts at Scottrade and have an extra $140 to go in the other. Here are some other things we could do with that extra cash each month:

I could go on, but you get the point. We could either do things like save money for retirement or cover other necessities substantially with an extra $470 per month. If we did happen on an extra amount like that each month we’d find other ways to make that money work for us like further investing, contributing more to our kids’ 529 accounts and likely something fun like putting away a little more each month for travel.

The point is, we’d do something with it to make the money work for us and not the other way around. When you’re simply taking on a crazy big car payment because the credit is easy or because the car looks nice it’s putting you on the other side of the wealth building equation.

Ok, now I turn it over to you. What could you do with an extra $470 per month? What things would be covered in your budget each month with that money? If you used part of it for fun what would it be? How much is too much for a car payment in your opinion?