That Time I Met Warren Buffett AND Mark Cuban

I met Warren Buffett and Mark Cuban last week! While awestruck and nervous, I got to overhear wisdom from both business titans and took a picture as well! 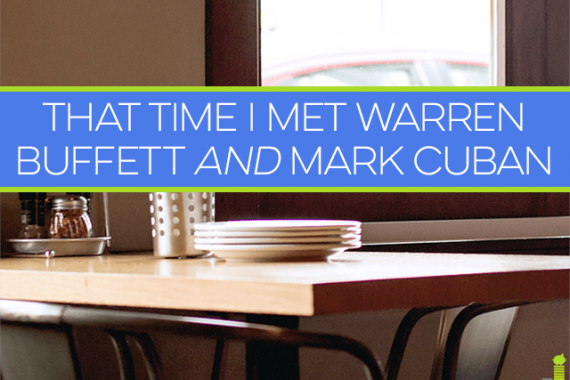 When was the last time you were so awestruck that you didn’t know what to say? I tend to be pretty level headed and don’t often find myself at a loss for words, though I’m sure my lovely wife might debate that at times.

Anywho, this past Wednesday I got to meet BOTH Warren Buffett and Mark Cuban! The best part of the meeting was where and how I got to meet them – at a local Dairy Queen and by complete happenstance.

We’ve lived in Warren Buffet’s backyard (a.k.a. Omaha) for the past 13 years and in all that time I’ve never met him in person. I’d seen him from afar at past Berkshire Hathaway Annual Conventions and have driven by his modest home (a VERY nice house, but still very unassuming based off his wealth).

My Dad was in town for a visit for the Memorial Day weekend. We had taken the little Frugal Rules’ to the park and Grandpa announced he wanted to take the kids to DQ for a lunch of blizzards. Of course, once they heard the word ice cream there was no convincing them otherwise.

We had a few errands to run and stopped at the nearest DQ. Side note, Berkshire Hathaway owns Dairy Queen so we have plenty of locations to choose from in the city.

We’ve been to this location numerous times over the years and Buffett is well-known for his liking of blizzards. But, alas, we’ve never had the luck of running into him.

Anyway, as we walked into the restaurant I saw Mark Cuban sitting at the opposite end of restaurant. Instantly, my mind was racing at cyber speed.

Why in the hell was Mark Cuban eating at a Dairy Queen in Omaha?

What would I ask him?

Would one of the little Frugal Rules’ pick their noses as they walked by him to get to the counter? (Sadly, as a parent, this is a thought I have WAY too often.)

Well, as I took a few more steps and my head ever so briefly got out of the clouds I noticed he wasn’t alone. From behind, the back of the man he was sitting with looked like a really famous old rich guy. He was wearing a modest sport coat and had balding white hair.

‘Could it be?’ was the thought that ran through my mind. No, of course, it couldn’t be. I never get this lucky. As I got closer I realized I was about to hit the mother load of PF heaven! Yes, it was Warren!

We ordered our lunch of ice cream and fries. As I’m on the final homestretch of losing 100 pounds I knew I’d just be rocking a cup of ice water and nothing else.

Our oldest ran off to grab a table, something I absolutely hate her doing, and completely on her own chose the table right next to Buffett and Cuban!

So, for the next 30 minutes, I sat about three feet from the two of them and listened…cough cough eavesdropped…cough cough to their conversation. All the while, trying not to be the guy who couldn’t get up the gumption to ask the girl out for Senior Prom.

You’d think that the conversation between two business titans would be high brow or hard to follow. But Buffet and Cuban’s conversation was nothing of the sort. Some of the things I overheard them discuss were:

Meanwhile, people were walking by, eating, drinking and licking ice cream cones with no apparent indication that they knew there were two billionaires enjoying ice cream together.

The manager came and spoke with them for a few minutes. Outside of that, they were two men having what seemed to be a somewhat light hearted, albeit serious, conversation.

What I was thinking while hearing said conversations was:

Basically, I was doing my best to psyche myself out and tried to think of every way not to say something to one of them or to even ask to take a picture with them.

After calming myself down some I decided to let the men have their conversation and not be “that guy” and act like a complete doofus by tripping all over myself to try and work some angle.

Instead, I’d let it play out and see where it went. After all, they’re simply having a conversation and I don’t want to be the twit that interrupts them.

Truth be told, it was Mrs. Frugal Rules who convinced me not to get all star struck but ask for a picture when I could as I’d only kick myself for not doing at least that.

She was right. Minutes before we were ready to leave, the two of them got up and what Warren said was priceless. “How about we take a minute for a quick picture?”

That was all I needed to hear. It told me two things, that I was obviously coming across with a major man crush and that he deals with this all the time. They were both very approachable, warm and happy to take a picture.

There was another group of people there wanting a picture, so I didn’t get much time to ask any questions – just a handshake really and me telling them how much I admire who they are and what they do.

That’s also not to mention the fact that I was in serious crush mode and couldn’t remember my name and, of course, had a flurry of questions rush to mind once we walked out.

We’ve all heard the stories about Buffett. He is notably frugal, in a smart way, and folksy, yet legendary in his wit and knowledge. Listening to him you’d never know that he’s worth $70 some odd billion, nor would you think that Cuban is worth billions either.

Aside from the chauffeured Lincoln Town Car you likely would not have noticed they can bathe themselves in cash for fun. We’ve also heard that we can’t innovate, invest or live like Buffett and Cuban because we don’t have billions of dollars.

I get that sentiment, on one level, but it’s simply not true.

It wasn’t the combined billions of dollars they’re worth that exuded confidence – rather it was the fact that they are walking the walk. That’s something we can all do, regardless of the balance in our bank account and is what will make that balance grow larger year by year.

Oh…and for those interested…Cuban had a medium blizzard and Buffett had a Peanut Buster Parfait and an Orange Julius – though he left half of the Orange Julius behind. For a brief second I considered taking it home to see if I could get anything via osmosis.

What is one question you’d ask Warren Buffett or Mark Cuban if given the chance? Would it necessarily be for a stock tip? Who do you get awestruck over? What celebrity sightings have you enjoyed? Did you ask for a picture?