How to Make Money Donating Plasma: Make $400 Per Month! 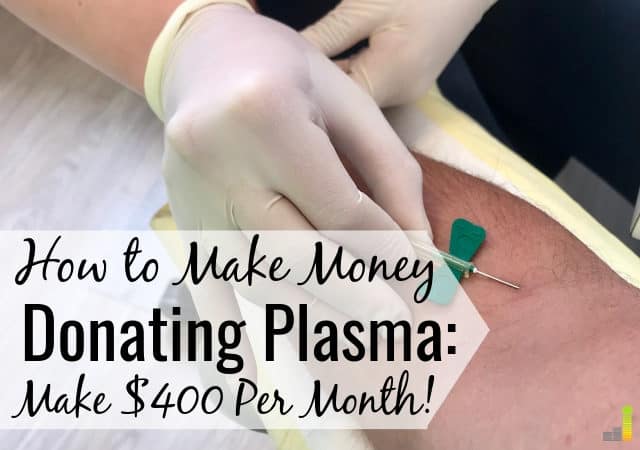 This post covers where you can donate plasma, how much money you can make donating plasma, and how to maximize your efforts.

How to make money donating plasma

Donating plasma sounds difficult. As long as you don’t mind needles, donating plasma for money isn’t that hard. All you need to do is go to a plasma donation center if you want to learn how to get money fast.

Donating plasma for money isn’t glamorous, but in a pinch, it’s a legit way to bring in some additional income.

What is plasma? Simply put, plasma is a clear and straw-colored liquid portion of your blood, according to WebMD. Plasma is what remains after the red blood cells, white blood cells, platelets, and other cellular components are removed. Plasma contains water, salts, enzymes, antibodies, and other proteins.

Once removed, your plasma is used to create products to help individuals with blood clotting disorders and other diseases. The process to donate plasma for money is a bit more involved than giving blood, which is why most donation centers pay for your donation.

Who is eligible to donate plasma?

Before you can make money donating plasma, you have to ensure you’re eligible. Below are the standard requirements to donate plasma:

Your state may have different requirements, including not having visited certain countries within a specified time period.

You must typically have to be a healthy adult to donate plasma for money. It doesn’t stop there. Because you go through the screening process every time you donate plasma, you have to be careful with what you eat, drink, or do beforehand.

For example, drinking ice-cold water may lower your internal temperature, which can make you ineligible that day. Or, if your iron tests a little low before donating, the center has the right to turn you away.

There will never be a guarantee that you’ll be eligible to donate every time you go into the center. Keep that in mind even if you meet all of the other requirements.

How long does the process take?

Donating plasma is more involved than giving blood. While donating blood is a relatively short process, donating plasma takes anywhere from 90 minutes to two hours. That time can be extended if the center is full, low on technicians or machines, or if it’s your first time visiting.

Make Extra Money by Taking Short Surveys
Taking short surveys in your free time can be an awesome way to earn extra money fast! The instant you finish a survey, Survey Junkie pays you in cash via PayPal. 6 Million users and an 8.9/10 Trust Pilot rating prove you can trust them.

Many people who make money donating plasma in their free time recommend bringing a good book or magazine or having some shows or a movie downloaded on a mobile device. Many centers also show movies in the donation rooms, but don’t depend on that if it’s your first time at the center.

You can even use the time donating to work on your side hustles. This can be a good time to use paid survey sites or other tasks you can easily do from your phone.

The wait time isn’t always ideal, so make sure to use the time to your advantage. Depending on the donation center, and your specific situation, you can expect to be able to donate two to three times per week.

What are the benefits of donating plasma?

The number one benefit to donating plasma is knowing that you’re helping someone who needs it. Even with all of the people who make money donating plasma, and with an increase in centers opening, there is still a shortage of plasma, according to the Red Cross.

By donating, you are increasing the chance of someone’s life being saved. That’s something to feel really good about. Helping someone in need isn’t the only benefit of donating plasma.

Below are a few more benefits of donating plasma:

For most, donating plasma for money is an easy and flexible way to make extra money. If you don’t have a lot of time to spend on a side hustle, or don’t want to invest money to start a new business, this could be a great way to supplement your income.

What are the cons of donating plasma?

Although there are many benefits to donating plasma, there are also a few negatives. It’s important to take these into consideration before you think about trying to make money donating plasma.

A big negative is that you can be turned away at any point. The center you go to doesn’t have to pay you, even if you’ve spent time filling out the questionnaires and medical forms. The paperwork doesn’t take long, often under ten minutes, but should still be a consideration.

Another con to donating plasma is finding the time. For people who want to donate more than once a week, you may need to find five to six hours per week to donate.

How to Find A Plasma Donation Center

If you find a donation center online, make sure to read reviews. This helps you know what to expect or if you should choose a different center.

Below are some popular donation plasma centers that have locations across the country:

You may not have one of the above centers where you live. In that instance, you can use the term “plasma donation centers that pay near me” in an online search to find local options. If you still want to donate plasma but need to use a local donation center, make sure to thoroughly read the reviews prior to going to the office.

How much do you get for donating plasma?

Negatives aside, you can make a decent amount if you choose to donate plasma for money. You may ask yourself “how much do you get paid to donate plasma?” and wonder if it’s a good way to make extra money on the side.

Keep in mind that amounts may vary depending on where you live. However, in most cases you can expect to earn at least $30 to $40 each time you donate plasma. In many cities, you may even be able to make $50 per donation.

Many donation centers also give bonuses if you donate a certain number of times during the month. Just be aware that most centers will require you to wait at least 48 hours between donation times. If you donate multiple times per week, you can expect to make up to $400 per month donating plasma.

Donating plasma for money can be a great way to help meet financial goals, such as:

There is a limit on what you can earn donating plasma, but it can still be a good way to make extra money when in need.

How will the donation center pay me?

You will find the top two options are most common. Cash is easy to work with for payment. If you choose a prepaid Visa cash card, know that it works like a debit card and you can use it to withdraw cash as well. Just make sure you know if it has any fees. 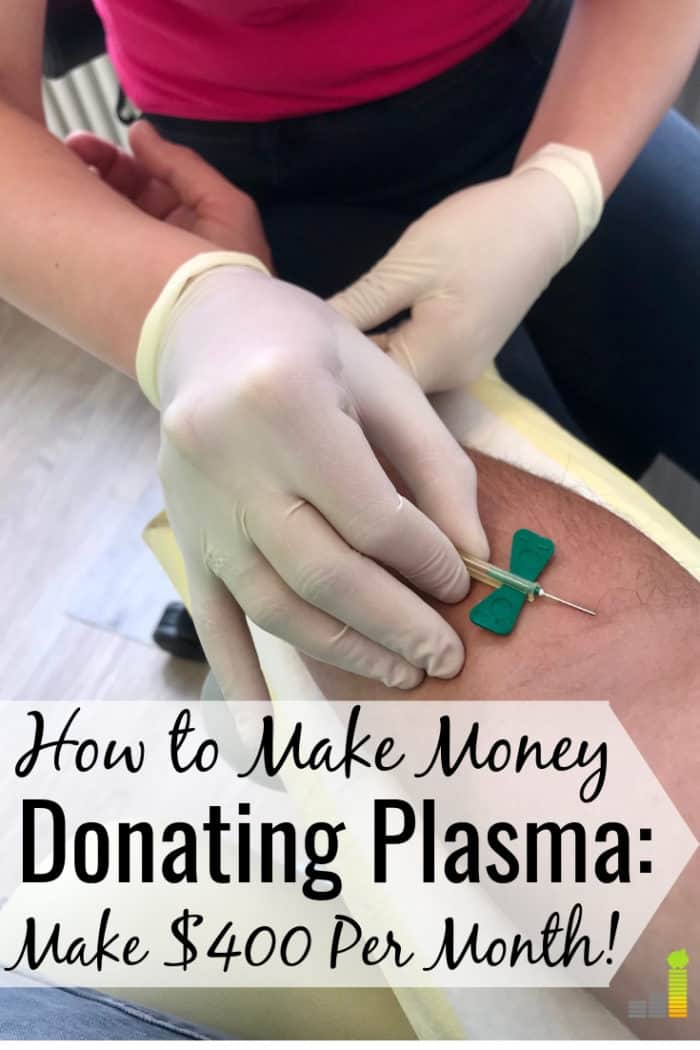 If you want to make money donating plasma, you may want to follow a few tips to ensure success. These are not requirements, but rather ways to ensure you won’t be turned away.

Here are some helpful tips to successfully donate plasma:

Follow the above tips and you should be able to make money donating plasma without issue. You also want to ensure you have no recent tattoos or piercings, avoided travel to certain countries, and don’t carry certain transmittable diseases as any of those may keep you from donating plasma.

If donating plasma is something you’re interested in, make sure you are aware of the pros and cons, and requirements, before you do donate. You don’t want to take a trip to the donation center only to find you’re ineligible.

I think it’s great that more people are choosing to donate plasma. Donating plasma is an easy and flexible way to earn extra money while also saving lives. It’s fine if you want to do it just for the money, but the side effect of helping save a life is definitely worth it, too.

Do you make money donating plasma, and if so how much do you make? What is the oddest thing you’ve done to make money on the side? What do you look for in a side hustle?

Kim is an online business manager and freelance writer that focuses on personal finance, productivity, and running an online business as a mom and entrepreneur. She shares tips and tricks to help women work less on their business while scaling their income on her blog, TheEntrepremomer.com