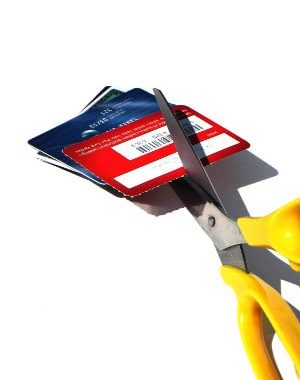 What comes to mind when you think of your college years? Many might say going to football games, making lifelong friends, or being away from home for the first time. I got to experience most if not all of that in my college years, but one of the most memorable was graduating with $25,000 in credit card debt.

How I Got There

I remember the first credit card I got when I arrived on campus. I walked out of the auditorium (class registration was still done in person back then) and walked into a slew of individuals hawking freebies from t-shirts to backpacks and water bottles. I now know that was just the bait to lure us in.

I walked up to the one I liked best and filled out the 30-second application and away I was with $2,000…or so I thought. This one decision opened up the gates and soon found myself amassing credit card debt along with three other credit cards.

The spending soon began as I found it easy just to swipe the plastic if there was something I wanted that I did not have the cash for. The salient point I did not realize, or want to admit to, was this money was not free, but a line of credit that if used, had to be paid back. I was using the misperceived freedom of credit cards to finance living way beyond my means.

This ignorant attitude lead to me accumulating over $20,000 in credit card debt in roughly three years at college.

I did not have the requisite funds to pay even the minimum balance and soon the debt that was a snowball turned into an avalanche. It didn’t take long for the creditors to start calling daily.

Ashamedly, I did not know what to tell them as I was sinking further into the quicksand of credit card debt. It felt as if there was no way out and that the quicksand was soon going to envelope me. Thankfully, there was soon to be a lifeline thrown to me.

How I Got Out of the Credit Card Debt Hole

In a word, it was discipline that got me out from under the mountain of credit card debt. Left with nowhere to turn I was able to find a credit counselor who got me on the road to recovery. The first step was to cut up the cards, then it was to establish a budget.

*Related: Looking for a cheap cable alternative that carries local channels? Read our review of the Hulu channel lineup to see why they’re a great solution to cut the cord.*

While this was so foreign to me, I was willing to give almost anything a try in order to get out from under the self-inflicted burden of credit card debt I created. She was able to negotiate lower rates with the credit cards for me and we then came up with a plan for me to get the debt paid off.

This was an incredibly painful and costly lesson, however it taught me to live within my means. The credit card debt, not created overnight, also was not paid off overnight. It took me nearly five years to pay off the debt and with each monthly payment I made I had the same sour taste in my mouth of the hard lesson learned. Looking back though, I see it as an invaluable lesson as it formed the framework of the frugal living I espouse today.

I Wish I Were Alone

This is a staggering statistic, and can lead to thousands of dollars of interest and fees paid over the life of the indebtedness. I share my story as a hope to encourage others who may be struggling with similar debt that there is a way out and that with discipline you can free yourself from the burdens of credit card debt.

Have you ever had a pile of credit card debt to climb out from? What helped you be successful to get out from under it?