The Worst Financial Decision I’ve Ever Made 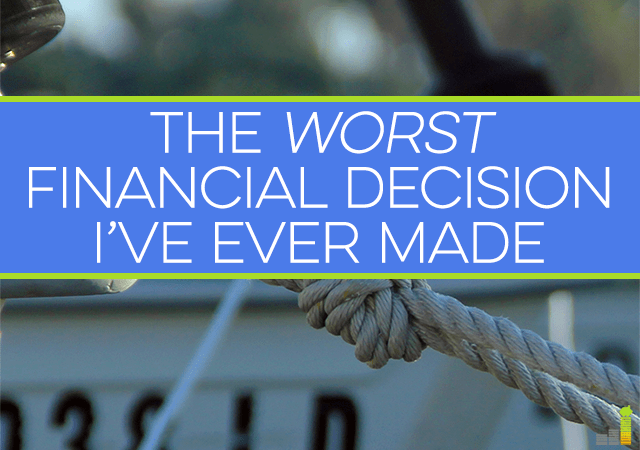 There was a time in my life, not so long ago really, that I wasn’t quite as frugal as I am today. After college, I fell into the same financial pit that many of us do by trying to finance things I couldn’t afford. The first thing I did when I landed a job after I graduated college was finance a bed, then a couch, and then a car, even though the one I had was just fine.

In the back of my mind, I was never really comfortable with buying these things on credit, but I justified it as “building my credit” and figured it was small potatoes anyway. No big deal, right?

But then I took it up a notch

I met a guy who was really into boating, and I fell head over heels. I had a new boyfriend and started hanging out with all of his boating friends, and I was having a ball. Even though he had the oldest, shabbiest boat on the lake while everyone else had boats worth six figures, we still had as much fun as everyone out there.

But did that stop me from doing something I shouldn’t have? Of course not!

The next thing I knew, I was signing the papers at a bank to upgrade from the old janky boat to  finance a 30-foot yacht of my very own, complete with two beds, a kitchen, and a full bathroom. It wasn’t my boyfriend’s new boat, or even our boat, but my boat. I had no idea how to fill the thing up with gas, much less how to drive it. (Do you even call it “driving” if it’s on the water? I still don’t know!)

To make matters worse, on top of the actual boat payment (which was more than I paid in rent at the time), I also had to pay for insurance, a wet slip fee that was about as much as an average car payment, and the gas that goes along with it. And that’s just getting started.

Boating, a small weekend event, became the single most expensive “hobby” that I’ve ever gotten involved in and was by far the worst financial decision I’ve made. I spent more on boating than I did on everything else combined. My decision was not exactly frugal, thrifty, or financially prudent, just dumb.

I knew I wasn’t ever really comfortable with my purchase because when people would ask me about it, I’d almost be embarrassed to talk about it. I knew I was a phony because I financed it, and that single purchase very well could have wrecked me financially.

Trying to Keep Up With the Joneses

Boating is an expensive hobby. We were surrounded by many people (executives, CEOs, engineers, a pilot) who could clearly afford the lifestyle.

I was not one of them.

I was an early-20s, fresh-out-of-college girl in an entry-level job with peanuts for a salary, not to mention that I hated my job.

It was not an ideal time to spend a lot of money, especially money that I hadn’t even earned yet. Did I not realize that financing a boat would only further chain me to the job I loathed? Clearly my priorities were out of whack or just completely unrealized.

Luckily this story has a happy ending. I was able to sell the boat about six months later for the amount that I owed on it, and I’m now married to the boyfriend. We both realize now how stupid that purchase was and have grown so much since then, but I look back on that time and shudder to think of what could have happened.

Don’t worry if you’ve made some really bad financial mistakes in the past, because they won’t haunt you forever if you learn from them. The most important thing about those decisions is where they lead you and how you grow from them. This is one dumb mistake that I’ve definitely learned from, so I say cheers to the dumb decisions that make us wiser down the road. 😉

What dumb financial decisions have you made in the past? What lessons did you learn from them? What’s one thing you’ve financed that you regret?