Things I Would Never Do: Go Back to Work After Winning the Lottery

Posted on August 26, 2013 by John Schmoll in Things I Would Never Do 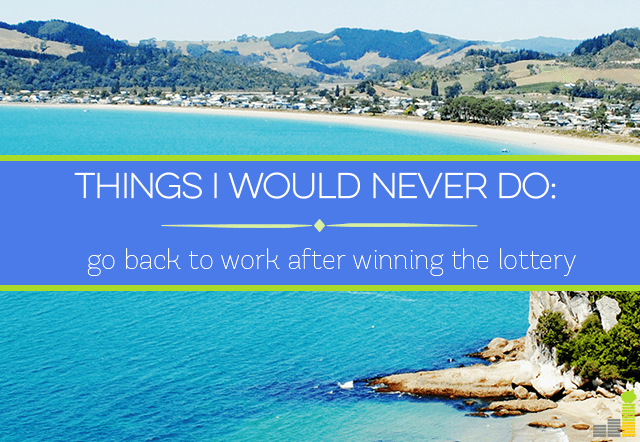 Welcome back to another entry in the series of posts in which I discuss things I would never do. The majority of the posts in this series have been fairly cut and dry for me, where I fell on one side of the issue or the other and I don’t know that is the case with today’s post on winning the lottery and going back to work.

Truth be told, I think I’ve spent maybe $10 in my life on playing the lottery. I’d say it’s all been when the Powerball has hit some crazy number; I’ll throw a couple of dollars at it, other than that, I’d much rather take my chances on growing my money in the stock market. That said, this article from Today.com stood out to me as it discussed a recent Gallup poll of individuals who were asked what they’d do if they won the lottery. If you’d like to check out some of the other posts in this series, you can do so below:

Does Winning the Lottery Mean the Same Thing to Everyone?

What I found interesting about the poll was that there seemed to be a pretty good split over what people would do after winning the lottery. To be fair, the poll asked people what they would do if they won $10 million in the lottery as opposed to hundreds of millions in a crazy Powerball jackpot. If you don’t want to read the article, the results were as follows:

I am actually a little surprised that more people polled would not do the stereotypical thing and tell their boss where to stick the job – especially with the growth in low employee morale in relation to how their employers are treating them. Gallup believes that the reason ties back to how shaky the economy has been the last few years and continues to be so. I know that in every office role I’ve been in there has usually been a group of people that would pool money together to buy lottery tickets every week and each time, without fail, numerous people would chime in that they would not be there the next day if the group won the lottery, but again everyone is different.

While many have their dreams as to what they would do if they won the lottery – either travel, buying things, or sharing with family members it is interesting to see this split. As an aside, it never ceases to amaze me when I hear of stories of people who win crazy amounts of money in the lottery and end up back in the same spot there were prior – barely making ends meet and racking up debt on their Discover it® card or other cards. There is no better advertisement for the need for financial literacy in our country than that.

What I Think I’d do

It’s hard to say what we’d do after winning the lottery, though I am confident if I was in my old job I’d likely tell my boss, as courteously as possible, what he could do with the job. Now that we run our own business, I don’t know that it would be such an easy decision. I believe that, ultimately, we’d shutter our business over time and follow our passions that would still, hopefully, continue to bring in income. Mrs. Frugal Rules has been wanting to become a published author (actually she is…just on an academic level) and write novels. She has a number of ideas that she wants to put to paper but with all that we have to juggle it’s not really feasible right now. I would pursue my passion to become a financial advisor, obtain my CFP, and look to help people in any way I could.

Beyond that, we’d shift much more time to helping those organizations in our area we care for and devote time to them and involve the little Frugal Rules’ in that endeavor. The one frivolous thing we’d likely do is a buy a bigger house so the little hooligans would not always be climbing on each other and so we could have more room. Other than the house, the other thing we would likely do is do considerably more traveling, as the kids got older and as our new businesses would allow. I think even though we’d still have a lot of money we’d still be looking for deals related to travel, like with the Hawaiian Airlines credit card, so we could save money on all of our traveling. Just because we’d have money doesn’t mean we still can’t live frugally, right?! 🙂

It also goes without saying that this would involve highly diversified investing to create many more multiple income streams that we could not only rely on, but also reinvest. Even as I type this now, I am not seeing myself falling on one side or the other, but would likely look at changing what we would do for our “job” after winning the lottery. 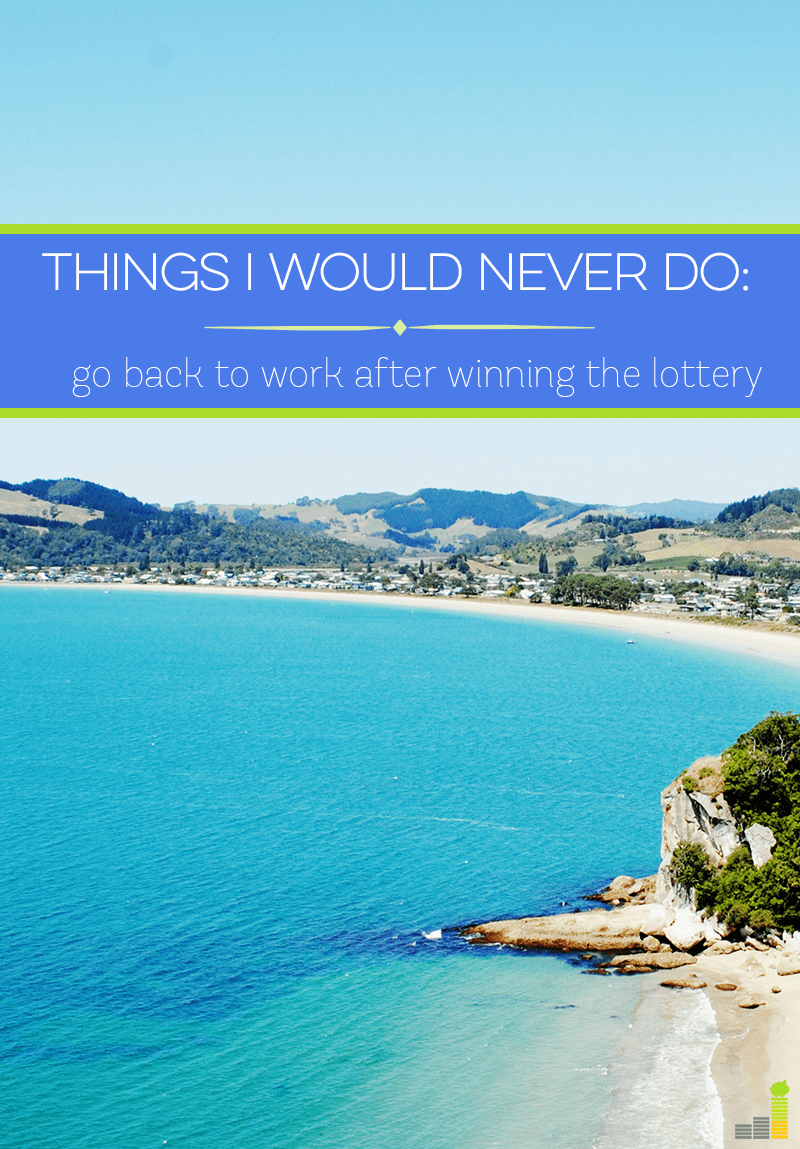 What Would You Do?

Ok, I turn it over to you now and ask what you would do after winning the lottery. For the sake of this exercise, we’ll dispense with the issue of whether or not you actually play the lottery, but just answer what you would do. Would you tell your boss where they could stick their job, or would you continue to go through the daily grind? If you didn’t would you start working in another job, follow your passion or start sipping mai-tai’s on a beach somewhere?

I do have to admit that is an awfully tempting proposition, though I do not know if I could spend the rest of my days that way. After getting over the shock of winning the lottery, what would be the first thing you’d buy? See, there are many questions you could ask about this subject. I do know one thing though, I am not really any closer to an answer on what I’d do if I won the lottery.

So what would you do after winning the lottery? Would you go to work the next day or tell your boss off? If you’re a PF blogger, would you continue to blog?