Let it Go…Why I Hate Frozen!

I hate Frozen! There I said it. While the Disney flick may be a hit with the kids it has created a frenzy of songs and stuff that can drive a parent nuts. 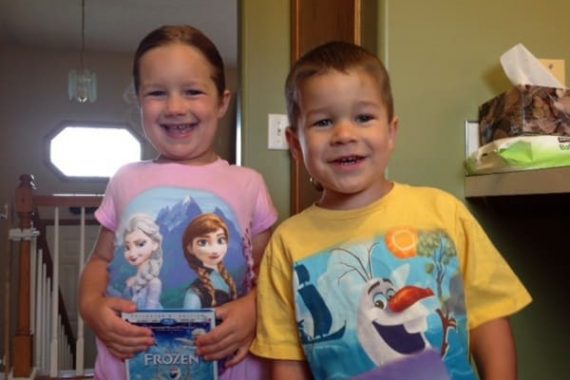 First there was Dora…and with her show a new hatred was kindled in my heart.

Then there was The Wonder Pets…I wished unholy things on those make believe animals with beedy, little eyes.

There was a brief flirting with Barney…that tall freak of a purple dinosaur couldn’t go away soon enough.

A blue dog tried to make residence in our house…but he FINALLY got the clue.

My Little Ponies made a brief appearance, but ended in a debate between my daughter and I as to whether or not they were true horses.

THEN…THEN…there was Frozen…strange that a show about ice should kindle a firestorm of hatred in me, the likes of which I have never known before and likely won’t see again.

Why I Hate Frozen

I apologize as this has absolutely nothing to do with money or personal finance, but is just something I have to get off my chest!

I know the picture of two of my wonderful kiddos at the top of the screen may make it seem like I’m a horrible parent or don’t love my kids. It’s quite the contrary in fact, I love them more than life itself. However, there is only so much a person can take.

Unless you’ve been living under a rock or aren’t a parent of a child under the age of 8 or 10 then you’ve likely heard of Frozen. As any cost conscious person would do, Mrs. Frugal Rules waited to take the kids to see the movie once it hit the “cheap” theaters. So, instead of upwards of $10 for a ticket it cost $3 and it was in 3-D to boot. Not bad, huh? 😉

Well, my lovely wife took the kiddos to see it there a few months back on a Friday afternoon. I loved the thought as it meant I got a quiet house for a few hours and could really get some solid writing done.

Little did I know that while I was pounding away at my laptop my entire, yes my entire family, became Frozen fiends. They came home singing the song many of us parents have gotten sick of: “Let it Go.” I admit it, the first  5,000 times I heard the song I thought it was cute, in a cheesy Disney way.

But then, something changed. It wasn’t just the two oldest ones singing it but Mom was singing it too. Then, our youngest (JP) who is just starting to be able to talk fairly well for his age started exclaiming “Et it Go Momma, Et it Go Momma!!!” whenever we were out driving somewhere. While I really do love his darling little voice, the request is unending.

The final nail in the coffin was Grandma. What grandmother doesn’t like to buy presents…err cough cough…crap cough cough for their grandkids?

Simply put, I’ve drowned in a flood of Frozen with the worst of it being the songs. It’s amazing as a Dad who works from home that lines from Let it Go or The First Time in Forever haven’t ended up in copy for clients.

Seeing as Frozen has become the highest grossing animated film in history and the crazy hoopla that has been created around the movie, I fear that my hatred of Frozen will only continue to grow as I’m sure sequels and other stuff will be hitting the market at some point in the not too distant future.

On the bright side (if there can be one) I am a Disney shareowner so I guess it’s not ALL bad as long as the profits continue to roll in. 😉 See, I did bring up money in today’s post. 😉

Oh, you want to hear a confession?? I’ve not even seen the movie yet…