Another Year Has Gone By – What Do You Regret? 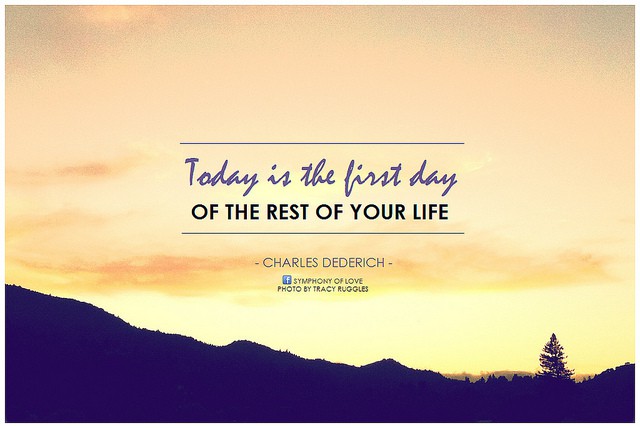 Believe it or not, we only have a little over three short weeks left in 2014. I know it’s cliché, but I have absolutely no clue where this year has gone. It feels like I blinked my eyes in January and we’re looking at the Holidays being upon us now. It’s nuts really, but a fact of life I suppose.

As people, I think we like to have closure and then follow that up with new beginnings. It becomes second nature I believe. This, not surprisingly, is part of why we’ll see a slew of New Year’s Resolutions posts come the New Year. I love having goals, I really do but as I get older I come to see the need to have a purpose or a drive behind those goals. Otherwise, they’re just not going to happen. However, if I have a singular focus behind the goal then my chances of success increase exponentially. Of course, this is just in theory as I have no scientific data behind it. 😉

Where I Was Almost A Year Ago

I’ve added a twist here on the site this year by sharing what my goals were for the year. It was important to do, for a variety of reasons, and glad I did it. I learned a number of things in doing it – key among them being the need to have fewer goals I can really attack throughout the year. I had too many goals and killed it on some and failed at others.

One goal I did not share, at least really specifically was my desire to lose weight. I’ve dealt with weight issues on and off throughout most of my life and really fell behind over the past five to ten years. I was ashamed. I was disgusted. I was afraid that no matter what I did I wouldn’t see success. I had tried to lose weight a number of times with some success losing about 25 pounds at most and having the wheels fall off entirely only to gain it all, and likely more, back.

I wanted it to be different this time. I had just celebrated my 40th Birthday and knew that if I didn’t do something now then it just wasn’t going to happen. That wasn’t something I was willing to let slide by. I knew action had to be taken. I knew that I had to act and not just act, but act with purpose. I had to have a driving goal with this new attempt. I wanted to act so as to not have any regrets. Loving sports the way I do, I wanted to leave it all on the field and hold nothing back.

But, that didn’t matter. I had to act. I had to do something and put a laser focus on it. That doesn’t guarantee success, of course, but I wanted to leave regrets out of the equation and leave it all up to my performance.

I’m glad to say that as of last night, I have officially lost 79 pounds! It’s sort of surreal really and a little mind boggling that I’m wearing clothes I bought nearly 20 years ago because nothing else I have fits at the moment. But, I suppose, that’s a good problem to have. 🙂

That was the mindset I took as I approached my weight loss goal. I have only so much time and I didn’t want to look back at the end of this year and think to myself that I allowed another year to go by the wayside without taking action and seeking to attack my goal with all I have.

We all have goals of some sort. Some are financial and some are not. I look at this year and while I killed it with regards to the weight loss I failed miserably with relation to saving in our kids’ college fund. We did put money away in their custodial accounts, though it’s far from enough and I haven’t opened 529’s yet. I also didn’t attack saving for a new car seriously enough. As a result, I’ve lost time and have to double time it next year.

The Time To Start Is Now

As you start looking over this past year and looking towards what you want to accomplish next year my encouragement is to start looking to take action now. Start dealing with your fears. Start dealing with the excuses you’ve used in the past. Start thinking about the “why” behind the goal. I know that isn’t easy by any means, but the more you do those things the stronger the bond is towards attacking that goal and thus you are more inclined to see some level of relative success with it.

I know my goal wasn’t really financial in nature, save for saving on potential healthcare costs, but you get my point. That said, the same mentality can most definitely be applied to finances. Whether you’re wanting to attack your debt, start saving for retirement or anything else, it can definitely be applied to any of those areas of money. While all of these seem unrelated, they do have one common basis – starting now. It won’t be easy and there are always a million reasons you can think of not to start but turn those reasons on their head and start now. You never know…you just may find yourself happy that you did!

What is one goal you wanted to work on this year but allowed to slide by? What attitudes or actions have you seen bring you success on goals in the past? What’s your go-to excuse for not starting on a goal?