The Power of a Wealthy Mindset 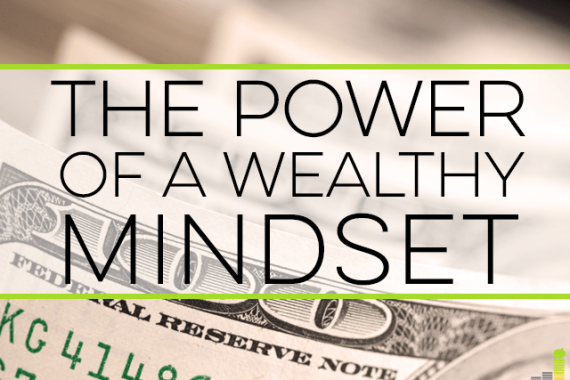 Home » Uncategorized » The Power of a Wealthy Mindset

Is becoming wealthy one of your financial goals?

Or have you completely dismissed the idea of wealth because it seems unattainable?

There are typically one of two beliefs people have when it comes to building wealth: those that know without a doubt that they’ll reach their goal eventually, and those who laugh at the idea of getting out of debt, let alone accumulating retirement savings.

You probably see where I’m going with this: wealth is a mindset. You either fall on the scarcity side of “just getting by,” or you fall on the abundance side of “there’s enough to go around, and I’m going to have a piece of it.”

I’ve been in both places, and I can tell you that the abundance mindset is going to get you further in life than the scarcity mindset, even if it can be more difficult to get into.

Are You Nickel and Diming Yourself? (aka the scarcity mindset)

Most of you know that frugal isn’t synonymous with cheap. Frugal living is about being smart and intentional with your money. Cheap is all about functioning from a scarcity point of view.

For the first few years of my adult life, I was pretty darn cheap (as much as I hate to admit it).

I learned this perspective from my parents. They simply never had enough. When I was growing up, they were in debt, and any emergency expense that came up threw them for a loop. There was never enough money to go around, and tough times were scary.

I didn’t have it nearly as bad as others, but the fact remains – I thought that money was hard to come by, even if you worked hard.

My first full-time job paid $12 per hour and no matter how many times I interviewed for higher paying jobs, I was met with “You don’t have enough experience.” I thought I was destined to make a low salary the rest of my life.

As a result, I nickel and dimed myself to death. I did whatever I could to save money…out of fear. It wasn’t a happy place to be in. If I went a few dollars over in a budget category, I berated myself for it. Saving was that important. I didn’t think I’d get ahead otherwise.

Unfortunately, this caused me to miss the big picture. You can’t cut back constantly while also hoarding your money. That’s not what life should be about, and you’re never going to focus on building wealth if you’re stuck on the little things.

Moving From Scarcity to Abundance

The biggest shift in my mindset came as a result of switching to working for myself. I didn’t have to deal with the “You’re too inexperienced for this!” line anymore. Thanks to my blog, I had plenty of proof I was capable of writing.

One of the best parts of being a freelancer is being able to set your rates and determine what you (and your time) are worth. I began to realize the time I was spending clipping coupons and trying to find a better deal elsewhere was much better spent on earning more.

Of course, there are a lot of objections to this. Getting started as a freelancer or small business owner isn’t easy. You have to work your way up. It takes time.

That’s all true, but the biggest difference you can make in moving from scarcity to abundance is realizing how many opportunities are out there. I already spoke about how hard work is going to get you places, not necessarily luck. A few people commented that luck is simply being prepared for opportunities – and that is critical.

I know some people who wall themselves off from opportunity before it even has a chance to happen. They just don’t think they’ll get that job, or they don’t see themselves ever making over a certain amount. It kills me to watch people limit their potential.

Limiting Beliefs Will Drain Your Wallet

Let me ask you a question: Do you think fear is one of the traits practiced by millionaires? Do you think they let limiting beliefs or self-fulfilling prophecies take over?

Maybe at one time, they did. No one is perfect. The point is, they didn’t get stuck there. They powered through.

There’s genuinely no secret to wealth. If you’ve read The Millionaire Next Door, you know that most wealthy people got to where they are with hard work. They started their own businesses and made smart decisions with their money.

So…why not you? There’s no special gift you need to possess to become wealthy, except maybe common sense. If you’re reading this, I’m pretty sure you’re already in possession of that!

The worst thing you can do for your money, and your life overall, is to impose limiting beliefs upon yourself. Don’t get stuck in analysis paralysis. Don’t let yourself get caught in a sea of jealousy, wishing you could be so lucky as others. Don’t doubt that you’re capable of whatever it is you want to achieve.

Instead, believe in yourself. Educate yourself. Start taking action. Sooner or later, you’ll find yourself viewing the world from an abundance mindset. You’ll realize that wealth is attainable for you. Maybe you’ll start by realizing you can make a healthy retirement a possibility.

Get Into the Wealth Mindset

I hate to say it, but there is enough to go around because there are so many people who aren’t taking action. Getting into the wealth mindset takes work, and it’s not for everyone. But that means there’s more for you when you decide to get on the ride.

Switch your mindset to earning more and being open to opportunities, and let go of nickel and diming yourself. Focusing on value is smarter and better for your wallet in the long run.

Have you ever dismissed wealth as not possible for you? Was it difficult to switch from a scarcity to abundance mindset? Or have you always been in the wealth mindset? What advice would you give to others who don’t think they can grow their wealth?