When Did We Become a “Throw Away” Culture?

Posted on July 2, 2014 by Grayson Bell in Shopping 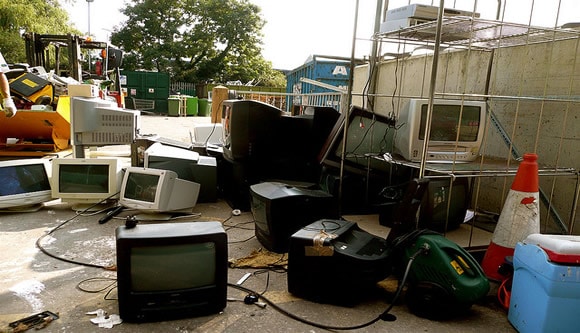 I have a little confession to make.  Back in the day, I used to throw away  almost everything. If something broke, it would go right in the trash.  I could have come up with a good amount of reasons to throw away something.  While the number of reasons were plenty, the quality of reasons were extremely poor.  Luckily for me, I have changed my ways.  Now, I am all about DIY and making things work.

If something breaks, I fix it. It I lose interest, I sell it.  If I can’t sell it, I donate it.  The best part is I might not even replace the item after it goes.  This all depends on my need, not my want.  Just a few days ago, I fixed a broken lamp socket in less than 5 minutes.  The lamp would have cost me $40 to replace, but it ended up only costing me $2.30!  All of this is leading up to a question which I have.  When did we become such a huge “throw it away” culture?

The Throw Away Culture

You have to admit that we as a nation throw away stuff so quickly.  This is especially true with electronics and clothing.  Not as many people donate their old items as they should and I used to be one of them.  I don’t have an excuse for it, but that is what it was.

I was in deep with this “throw away” culture. It was ingrained in my mind.  If it is broken, don’t fix it, get a new one.  We all love new things and I think that is one reason why we throw things away so easily.  Here are some other reasons I think we throw items away before thinking of the alternatives.

I am happy to be a part of DIY nation.  My knowledge has really expanded since I started building and fixing my own items. For me, the thought of being able to put something together with my own hands is a thrill.  Also, bringing something back from the brink of death is also rewarding.

When I go into a store and get items to fix something or build something, I do tend to get questions.  These might come from cashiers or other people. I am not sure why I get questions like this, but I will take it.  Most of the questions revolve around finding out what I am doing.  Maybe they are curious of my shopping list or want to make sure I am not doing something illegal.  Either way, I have no problem telling them what I might be building or repairing.  The sad thing is, this is the typical response I get:

Why don’t you just hire someone?

This response used to irritate me, but now I find it so usual that I respond with a simple smile.  Along with that smile, I tend to ask my own question as a response.

After this question, I typically get a blank stare.  Then I follow up to say that you can’t become good at something without practice.  I learn by doing and why pay someone to do something I am more than capable of doing myself.  This just shows the lack of repair knowledge in our culture.  Some people might not know how to fix something, but they will try to figure it out. Others will just suck it up and call the pros.  I will always try something once!

The Availability of Credit

We are definitely a plastic driven society.  Cash might not be king anymore.  Credit is ruling our world and people love it. Don’t get me wrong, I buy almost everything on credit, but I pay off my balance each and every month.  The issue here is many people don’t do this.  We all understand that credit allows you to live beyond your means.  Because of this issue, I feel we have become more prone to just throw something away when it breaks or we don’t want it anymore.  Since we can buy a replacement which is new and shiny, why repair your old one?  Eww…something old!

Ah, shiny! We are enamored by shiny things.  If it is new, it has to be ours.  When a new iPhone or something else from the tech world debuts, people drool over said item and then justify their need for it.  We obviously need the newest iPhone. It has a bigger screen and this and that. It doesn’t matter that our current phone still works perfectly fine.  I need this now!

I blame both the marketing machine we call consumerism along with consumers in general.  We have lost control of our emotions. We let them play such a big role in our buying decisions.  Anyone can justify a purchase if you give them enough time and reasons.  Doesn’t mean it was a good one.

Over the years, I have changed the way I look at my possessions. Most are not necessary, but that doesn’t mean I am going to toss them for new items.  That just isn’t economical. The biggest problem is our economy is based on how often people toss their old junk for new items.  Most products are designed to have a short lifespan because it keeps the buying cycle efficient. It is just basic economics and marketing baby!

What about you?  Do you have two left thumbs when you try to fix something or are you a Do-it-Yourselfer too? Do you have a tendency to just “throw it away” or do you attempt to fix/donate items?

Photo courtesy of: Scorpions and Centaurs

Grayson is the owner of Debt Roundup and Empowered Shopper. He also co-owns Sprout Wealth and Eyes on the Dollar. After going to battle and winning against consumer debt, he decided it was time to learn how to use credit wisely and grow his wealth. He discusses all things personal finance and is not afraid of being controversial. He also is a freelance writer and blog manager.