Taking the Plunge: 2 Years Since I Quit!

Posted on June 16, 2014 by John Schmoll in Self Employment, Taking the Plunge 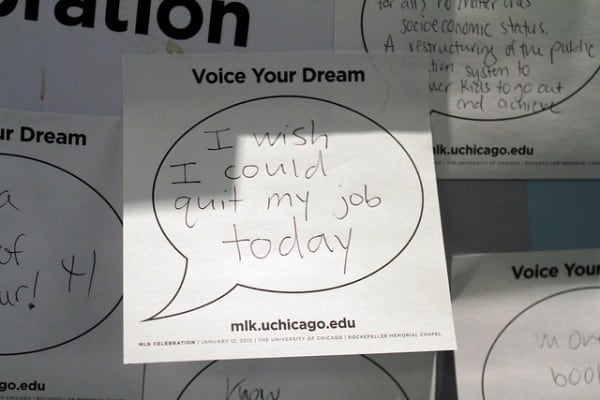 Two years ago today I was having a hard time getting out of the bathroom. I had a knot in my stomach and nervous energy coursing through me. It wasn’t indigestion and it wasn’t bad food from the night before. No, this was self-imposed and entirely mental. You see, I had just quit my job to join the ranks of the self-employed. As I unloaded the contents of the small box from my cubicle that was my former work life, I was wondering what in the world I had just done.

Today much of the fear I felt two years ago has been replaced by excitement as I look at our growing business. Yes, today is a special day as it marks my two year Quitiversary. For those who were around for my first Quitiversary, they know Mrs. Frugal Rules started our business roughly two years prior to my leaving my job as a way to make ends meet and allow her to stay home with the kids.

Little did I know that her side hustle would turn into allowing me to tell my boss what he could do with my stock shilling job in the online brokerage industry. If I were truly honest with myself, while I was incredibly hopeful, I had serious concerns that things wouldn’t go well and I’d end up at another unfulfilling job. I mean, the doubters and the nay-sayers just had to be right…didn’t they?

I know I shared last year some of the things I learned over my first year of taking the plunge into self-employment. The thing is I’ve learned so much more about myself and business over this past year. So, I thought I’d share some of what I’ve learned with you. I know, I thought you’d never ask. 😉 Anywho, here it goes:

I know there are many other things I could list, but these are the ones that stick out to me at the moment. As I shared a few weeks ago, I’ve come to love the choice and freedom that can come with working for yourself. That doesn’t mean that’s it’s all going to be chasing butterflies and sucking lollipops, but I will take the freedom and choice I have over the option of being shackled to a large corporation any day.

Where Do We Go From Here?

As I look back at all the ups and downs of the past two years I have come to embrace them. That’s not to mean I don’t still deal with fear, because I do. I imagine that I will at some level for the rest of my life. However, I don’t intend to let that fear hold me back.

I see all that I have learned about myself and about running a business over the past couple of years and dealing with the fear is worth it. I’m sure I still will have days where I wonder what the hell I’ve done and want to shut it all down, but life is simply way too short to give into the fear to actually do that.

With that in mind, I’m committed to the long haul with this. I want to teach our kids that living a life of coloring outside the lines is one that is much more enjoyable. I want them to see that the world is full of opportunity and not let fear hold them back. I want them to see that just because it may not make sense to those around them doesn’t mean they shouldn’t chase after their dreams. In total, I want to teach them to live life and enjoy it to its fullest, regardless of where it takes them.

I know this isn’t my normal writing style, as I’ve been more reflective lately as I hit the two year mark. But, I fully believe that if there is something in your life you want to chase after it. You may fail or you may find wild success. You never know. I can tell you one thing though, life is much sweeter when you try and fail as opposed to not trying at all as it’s in the failure you learn the greatest lessons.

I also believe that just because someone tells you it can’t be done or because you’re foolish to try, you don’t have to accept that as gospel truth. Yes, there may be something to take out of it but only you know your situation. As my Mom says, don’t judge a person until you have walked a mile in their shoes. The nay-sayers may say you’re foolish or will fail miserably, but life is far too short to let the peanut gallery hold you back.

As one who hasn’t, I’m immensely thankful I didn’t and look forward to what else is in store on this crazy ride of owning my own business.

What is one thing you fear that you know is holding you back? Do you ever want to work for yourself – why or why not?