Taking the Plunge: The Day I Finally Said, ‘ Quit Your Job ’

The decision to quit your job and abandon a predictable paycheck for the unpredictability and freedom of self employment can be an arduous one. 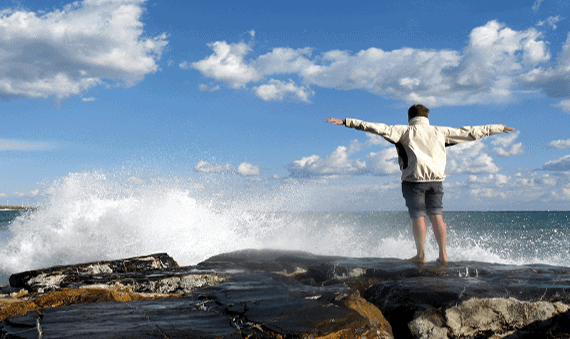 Home » Uncategorized » Taking the Plunge: The Day I Finally Said, ‘ Quit Your Job ’

Please welcome back, after too long away, the lovely Mrs. Frugal Rules as she shares what it was like for her to watch me go through the decision whether or not to quit my job. Enjoy…

During the more than a decade that I’ve been married to Mr. Frugal Rules, I can honestly say that this is the first time I’ve seen him enjoy his work.

Twelve years is a long time to watch someone suffer in jobs that they are either overqualified, mismatched or unsatisfied in. I asked Mr. Frugal Rules if I could share a little about what it was like as his wife to watch him make the leap into self-employment and happily, he agreed. I want to share this candid experience about what it’s like to quit your job because I think there may be a lot of people out there who can relate to it. If nothing else, my hope is that if you are miserable in your job, feel like you want to quit your job, or even are just unfulfilled, you can be encouraged by our experience to take the risk on stepping out of what you know – as scary as that is. That step out doesn’t necessarily have to be self-employment. A decision to quit your job could mean applying for a new job or even exploring other position possibilities within your current company.

Know When It’s Time to Quit Your Job

After Mr. Frugal Rules and I moved to Nebraska, we worked a series of temporary positions before finding permanent jobs. He ended up at a bank and I eventually landed a good job at a life insurance company where I stayed for nearly ten years. While I found a challenging, fulfilling position that allowed me to grow personally and professionally, Mr. Frugal Rules bounced from one disappointment to another. I knew it wasn’t because he lacked the skills, talent or drive, but it just seemed that no matter where he went he couldn’t get his boss or company to respond to his demonstrated professionalism and expertise with increased responsibility and autonomy.

I watched his frustration grow, then deepen, and finally, wear him down in the last corporate position he held. Mondays were always the hardest for him and Fridays were the best. I’d watch him go from looking carefree when the weekends began to weighed down and stressed by Sunday evening because he knew what was waiting for him the next morning. I watched him go through this dynamic for four years. When I began to see it affect his health, I knew it was time for him to quit his job.

Signs You Need to Get Out

It can be hard to know when it’s time to quit your job but there are signs if you pay attention to them. A sense of loyalty and hard work can even sometimes blind you to a genuine need to quit your job. My husband is not a quitter. He works hard and is extremely loyal. It takes A LOT for him to give up on something or someone. He is also deeply driven to provide for his family. “Hated” doesn’t even describe how he felt about his job but he did not want to leave it without having another, better job to go to. But finally, after I and both of his parents told him regularly, “Quit your job already!” he started to listen. I think he realized that no job is worth your life. To me, the fact that he felt like a different person on the weekends, momentarily removed from the impending doom of his day job was another big sign that it was time for him to consider leaving.

I think that if our fourth child hadn’t been born, my husband would still be helping investors at his old brokerage job. Having a two-week break gave him the separation he needed to see what the rest of us who loved him already knew – his job, and specifically the environment in which he was working it, was literally killing him and no amount of income could ever replace him. I think he realized that he wanted to be there to see our children have children of their own someday and didn’t want them to see him slaving away at a job he not only hated but felt morally compromised in.

Looking back, I’m thankful for what he went through because it led him to where we are today – running our own business, which is what he has truly wanted to do for the entire time I’ve known him. He’s developed a new skill set and while he works far more hours per week now than he ever did at his desk job, it’s happy work. We’re building something of our own and we’re helping others. And, for the first time in a long time, I feel like I finally have the man I fell in love with back. And, anyone who has ever loved anyone knows, that is a very good thing.

Are you watching someone you love suffer in a bad job? How would your lives change if he or she took the plunge into self-employment?