We're all guilty of stupid money mistakes, some worse than others. I share some of my dumb money mistakes from the past and what I've learned from them. 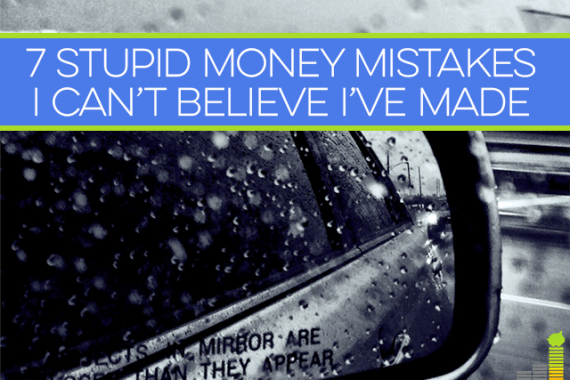 Stupid money mistakes – we’ve all made them. Some of them are nothing more than a momentary blip. Then there are the doozies that make you want to go back and smack yourself silly. Fortunately (or unfortunately depending on how you look at it) I’ve made plenty of dumb money mistakes over my 40 years here on earth that have provided ample lessons for me to learn from.

Why do I share some of my money mistakes? Well, for two reasons really. First, to show that all of us are fallible. No one is perfect and we all have or had room to grow in certain areas – myself definitely included.

Second, and somewhat more importantly, is to show why I care so much about financial literacy. My parents didn’t do much in terms of teaching me about money. That’s not to deflect my responsibility for the stupid things I’ve done but as a means to help give the little Frugal Rules’ a solid foundation so as to make wise decisions with their money as they grow older and start out lives for themselves.

So, if you’re wanting some dirt on me then today’s the day as I peel back the curtain on some of the most boneheaded money mistakes I’ve made over the years.

No down payment on our house. This is likely the most recent money mistake I’ve made. We still live in the first house we bought a little over eight years ago at the height of the real estate craze. Our first child was on the way and I rationalized to myself that we had to be in a house. Boy, do I wish I could go back and knock some sense into myself! Thankfully Omaha was sheltered from most of the downturn, but that aside it was a stupid decision. Suffice it to say for our next house it’ll be at least 20 percent down, if not more.

Putting Vegas on credit cards…Twice! No, we’re not talking about to earn some sweet points, but to rack up debt! After Mrs. Frugal Rules and I got engaged I moved out to San Diego and lived there for roughly two years. In giving license to my spontaneous side we went to Vegas twice and put it all on plastic. We didn’t gamble much…in Vegas that is, as the gambling was in financing the trips for a number of months on our credit cards.

Buying DVDs. I know this one might be a bit debatable as who knew the direction technology would go long-term, but we have far more DVDs in our entertainment room than I care to think about. Sadly, we could watch likely 90+ percent of them on Netflix or Amazon Prime today.

CDs. No, I don’t mean the interest bearing kind. I know it ages me a bit here, but I spent major bank on music back in college. It would be nothing for me to walk into the music store and plunk down my card for at least 8-10 CDs at a time and several times a week at the height. Not really surprisingly, this made up a good part of the credit card debt I rang up while I was in college.

Cashing out my 401(k) because I “needed” a computer. This one was a real doozy! It was one of my first jobs out of college and I left for another job. I had built up several thousand dollars in my 401(k) which I had been told I could and should rollover into another retirement account. But, I also told myself I needed a new computer and saw the 401(k) as found money. So, I cashed that puppy out (not realizing the absolute ridiculous mistake I was making or even seeing that the taxes alone would’ve gotten me halfway to the computer). I have no clue what I spent the rest of the money on. Yeah, I know, I’d smack my younger self too.

Buying a ridiculously massive truck because it looked cool. This happened soon after Mrs. Frugal Rules and I moved to Omaha 13 years ago. Her trusty Corolla died at just under 200,000 miles. Instead of putting in the money needed to try and repair it we went to the closest dealership and bought a fire engine red extended bed truck because it looked cool. This is the stupidest money mistake I’ve made. Why? I HATE the color red, I’m NOT a truck person and it came with a car payment of over $350. It was stupid all the way around!

Having season tickets while paying off debt. I’ve written before of my love of K-State football. Mrs. Frugal Rules and I used to have season tickets, and do now with my younger brother, though in the former instance we were still paying off my student loan debt. I don’t believe you need to give up everything in life when you’re paying off debt but this would’ve easily given us at least an additional $1,000 a year to pay towards my debt. While I did enjoy having them I’d rather have had the debt freedom, that much sooner.

Ok, there you have some of my most stupid money mistakes. I’m not proud of them, but you live and learn – right? At the very least, it provides a foundation of have real life lessons to draw on when we are teaching our kids about money.

What are some other stupid money mistakes to avoid? What money mistakes have you been guilty of? What triggers you to make foolish financial decisions?