Why We Should Stop Judging Others Based on Their Spending

Judging others based on what they spend their money on is something we've probably all been guilty of. Here's a case for why you should try to stop. 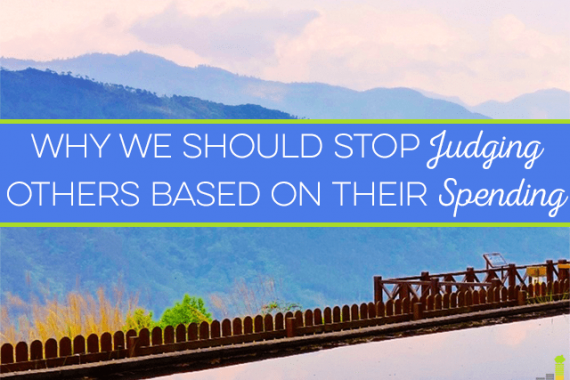 Maybe you’ve made a snide comment about a coworker who leases a car that’s $500 per month. Maybe you’ve rolled your eyes at your friends who insist on spending $50 on a gym class each week. Or maybe you can’t wrap your head around why a family member just bought a McMansion.

If you’re a smart consumer (and I’m going to guess you are, or you’re headed there, if you’re reading Frugal Rules!), you might find yourself questioning the spending of those around you. It can be hard to ignore sometimes. Heck, it can happen even with strangers.

The problem is, we question why other people spend money on certain things, and we make assumptions about them based on those purchases. Assumptions that may or may not be true.

Which leads me to ask, is there really any point to judging others based on their spending?

My Slight Epiphany With Being Judgmental

I’ve been frugal all my life. My parents were never crazy spenders, and they didn’t care for brand name items.

I’ve always had a hard time understanding why someone would willingly spend their entire paycheck and live in anxiety until they got paid again. No purchase (in my mind) could be worth that stress.

Judging only got worse as I began blogging about personal finance. People are putting their lives out there, along with all their financial decisions. It can be easy to judge when we think we know the entire picture.

But rarely do we have the whole story, and some people don’t stop to consider that.

Judging in general isn’t healthy. It doesn’t come from a good place in our minds or our hearts. And lately, I’ve realized there’s no point to it.

People are going to spend their money however they want to, whether we like it or not. Plain and simple.

Technically, they have every right to. It’s their money, right? Would you like it if someone told you to stop being so frugal? To get out and “live” more – according to their definition?

Now, there’s a time and place to at least try and give helpful advice to those who ask for it. As someone who can talk about money management all day long, I would be more than happy to help any of my friends or family if they asked for it. I don’t offer unsolicited advice, though.

However, this post isn’t about good intentions and trying to steer people on the right financial path. I’m just making a case for why we should stop judging others, especially when we don’t know them that well.

Is it Really Affecting Us in Any Way?

Okay, I know I’m not the only one who has made quick assumptions based on the type of clothes someone is wearing, what brand their handbag is, or what car they’re driving. There are stereotypes around luxury name brands, and many of us go along with them.

I’m going to put this question out there: Who cares?

Who really cares if your coworker is leasing a car that requires a monthly payment of $500? Does your friend paying $50 for their favorite gym class affect you? Who cares if your family member just took on a massive mortgage for that McMansion?

The answer, in most cases, is that no one really cares enough for it to be on their mind all day. You’re likely to mull it over for a minute or two, possibly gossip about it (another bad habit), and then get on with your life.

The purchases others make rarely affect us, unless we’re somehow financially tied to them (and I’m not talking about immediate family members here).

Especially if they work to afford what they value.

Cars get picked on a lot, so I’ll use them as an example here. Sure, there are quite a few people out there who have nice cars because they value luxury brands, or because they want to look cool on the road.

But there are people out there who might actually be car enthusiasts. What if waking up and getting to drive that $500 a month car to work is what puts a smile on their face? What if they look forward to taking it on a long drive over the weekend? Or taking it to the track?

What if, gasp, they can actually afford it? Or maybe they’ve optimized their finances in such a way to make it affordable?

I’ll also throw this out there – not everyone prioritizes retirement, early or traditional. Yes, saving for retirement is still important, but some people can actually see themselves working at their jobs or in their field for the rest of their lives.

This is simple a case of people having different values, and there’s nothing wrong with that. There are many people out there who don’t understand the appeal of retiring early or side hustling. At the end of the day, it’s important to do what’s right for you, and there’s no one-size-fits-all solution for personal finance.

Focusing on Others is Just a Drain

Lastly, being concerned with how other people are spending their money is almost as much of a drain as is keeping up with the Joneses. The difference is, it’s not a financial drain, it’s an emotional one.

This goes along with the gossiping I mentioned before. If any of you have ever worked in an office environment, or have family who likes to judge, you know how easily gossip can get out of hand.

What’s the use in talking badly about someone behind their back? Does judging someone else’s financial choices make you feel superior?

While I’m quick to commend people for saving, attacking debt, and making sensible financial choices, I don’t necessarily think it’s right to be condescending toward someone taking a different path.

There are quite a few people who like to get on a high horse and espouse their financial beliefs. The more famous financial gurus are certainly guilty of that. But are they perfect? Are they truly superior?

I wouldn’t say so. Don’t get me wrong – you have every right to be proud of yourself and how you manage your money if you feel that way. But it’s all subjective. Everyone defines success, financial or otherwise, differently, and none of us are in the same situation.

Sure, there are basic tenets of personal finance that are great to follow, but even if two people have the same goals, they’re not going to take the same exact path.

Instead of focusing on how other people are spending, keep the focus on yourself. There’s no use in wasting your energy on things you can’t control, especially when it doesn’t directly affect you.

I think we would all benefit from less judging when it comes to financial matters. As the cliche goes, “personal finance is personal.” What’s right for us might not be right for others. There’s no way to know.

One last note – if someone is vocal about their financial situation (saying they’re broke, and then spending on “unnecessary” things), unless they ask for help, just brush it off. I know there’s a few people out there like that, but you can only lead a horse to water. You can’t make it drink.

Are you guilty of judging people based on their spending? Do you judge people for their lack of spending? What purchases do you find you’re most judgmental of? Have you tried to stop judging when it comes to money?