How to Get Your Spouse on Board With Frugality

Frugality isn't easy to start if you're a spender, especially if you're married to one. Here's 6 ways to get your spouse on board with living frugally. 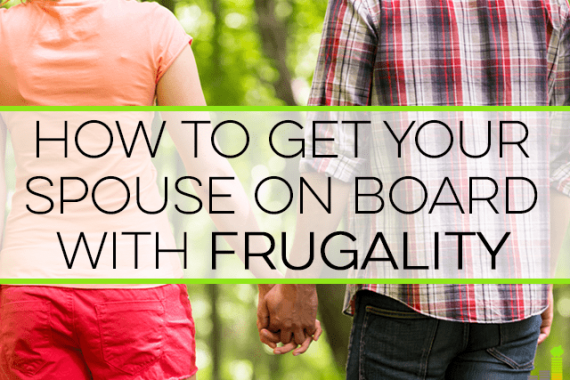 Like many young women, before I got married I often thought about what my future husband would be like. I knew I wanted to marry someone who was smart, kind, and thoughtful, someone who would make a great father some day, and someone who wasn’t afraid to work.

Luckily, the man I married did meet all my expectations, except for one: he was terrible with his money; the very definition of a big spender. He was so good at spending that when I met him right before the recession, he was knee-deep in credit card and consumer debt and underwater in his mortgage. He was at his lowest, financially speaking, and it was tough watching him navigate his way through the painful financial situation he had created for himself.

After we married a few years later, I knew my efforts at living a frugal lifestyle to save money would be futile if I didn’t get my husband on board with a financial plan, but I also feared that I was facing an uphill battle in getting him to be more responsible with our newly shared finances. I wasn’t, however, willing to sit around and watch while the same mistakes were repeated, and I sure didn’t want to work until I died to support spending habits that left us with nothing in our golden years, so I took action to get us on a better path.

Here are my best tips on how to get your spouse on board with frugality.

Stop Nagging Your Partner About Frugality

First of all, nagging never works…ever. If you preach to your spouse every day about their spending, they’re going to resent you for it, and your sage message of a financially secure future will fall on deaf ears. Nagging gets you nowhere; I know from experience. So if you tend to nag, hold your tongue and instead try a different approach.

Be the Best Example

If your spouse has no desire to take the financial reins, then absolutely become the financial head of your household. Ask your spouse to save receipts so that you can balance the checkbook. Organize and file all the important parts of your financial picture so that it’s all in one secure place. Set up an account on Mint.com or Personal Capital to help highlight your net worth, household spending patterns and your financial goals.

If your spouse ever shows an interest in any of it, then great! Answer every question they have, but don’t force it on them. They’ll come around when they’re ready.

When a Budget Just Won’t Cut It

In our house, the word “budget” used to be a four letter word, and I know a lot of other people feel that way, too. Budgeting sounds restrictive to those who have never done it before, even if you know the opposite to be true. Because my husband felt completely restricted anytime I even mentioned the word “budget,” I knew I had to stop.

That approach just scared him away, so I had to come up with a different strategy to get him on board with saving money. I had to encourage him to embrace frugality by planting a seed that would get his attention in a different way, and any idea containing the word “budget” wasn’t going to work.

The Big Breakthrough: Tracking Our Spending for a Month

What ultimately turned my husband around for good was the first time I suggested we track our spending for one month. Since I started small with only one month, it didn’t seem like too much to ask, so he agreed.  I also reassured him that I wouldn’t question or judge any expense he listed, which was key, because I wanted him to be truthful about his spending. So for one month, he carried a little notebook in his pocket and recorded every expense he made, even the most trivial of purchases.

Fortunately, that simple act resulted in his own realization of his excessive spending, and I didn’t have to say another word. Since he recorded his own transactions, he couldn’t hide from them. He saw how much he was spending at Lowe’s, how much it cost him to eat out at lunch every day, and how much he was spending on Golden Tee for a single month, and it was eye-opening for him.

He was horrified. Hello, breakthrough! This single event was years ago, yet he still talks about how it reformed his thinking about his spending.

Work Towards a Common Financial Goal

My last tip is to create a common financial goal to share with your spouse. Choose a goal you both would love, such as saving for a trip to the Caribbean or a new couch. It doesn’t really matter what it is, as long as it’s a shared interest.

Make a spending plan or designate a savings account just for that goal, save for it every month, and see how your spouse feels when you finally reach your goal. It may seem elementary to you, but if you have a spouse who doesn’t care about blowing money, then it may be just what you need to jump-start your path to a shared financial future where you are both working towards the same goals. No one can change overnight, so expect progress to come one tiny, precious baby step at a time.

Today, my husband laments about how much money he blew in the past. He talks about all the real estate we could own or the early retirement we could be enjoying right now if he had been smarter with his money before. It’s not always fun to reflect on those realizations, but I remind him that at least he came around eventually. You have to learn in your own time.

If your significant other doesn’t care about your financial future, don’t give up yet. It probably took you some time to start caring about your money, so you can’t expect your spouse to jump in headfirst with you today. But keep at it. My marriage is a great example of what can happen, because we are now working together towards financial independence with our marriage still (happily) intact.

Did you marry a frugal person? If you’re not currently married, would you marry someone who wasn’t frugal or who was deep in debt? How do you and your significant other handle your finances together?