How I Simplified My Finances

Do you want to simplify your finances but don't know where to start? I share my system that allows me to manage my money in 15 minutes a month. 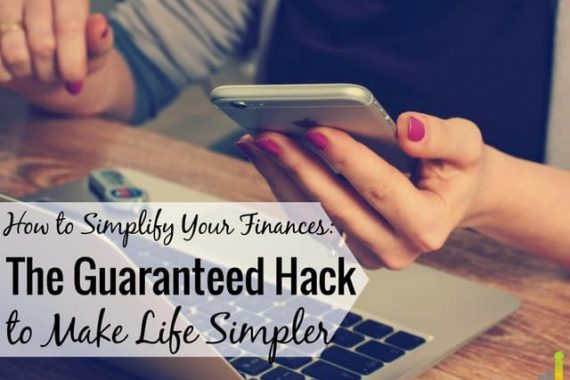 Home » Save Money » How I Simplified My Finances

While I’m out of town this week finalizing my Dad’s estate, please enjoy this contribution from my friend Jim Wang from Wallet Hacks.

I could also keep them all straight in my mind because I didn’t have as much complexity in my life.

Fast-forward a few years and now that I have kids, other financial obligations and my memory isn’t as great anymore because it’s full of all this STUFF. When I was younger, I equated complexity with efficiency and effectiveness. Being optimal was the goal.

As I’ve gotten older and demands on my time and energy have increased, I’ve learned that complexity isn’t always best. It may seem like I’m getting the best rewards but it comes at the cost of having to remember which cards to use in what situation, having to review credit card statements for fraud, and having to pay them on time even if I have auto pay set up.

Mathematically optimal might not be the goal after all.

Complexity is a Huge Pain

A few years ago I went on a mission to simplify my finances as much as possible. Instead of financial efficiency, which meant getting the maximum possible rewards, I opted for time efficiency. I now spend just 15 minutes a month managing my money and I willingly give up a few dollars of rewards for a simpler money system.

Simpler not only means less time but fewer mistakes. It’s easier to juggle two bowling pins and much harder to juggle just even just one more additional pin! (try it!)

There are two ways to simplifying your finances. I’ll share what I did and then an alternative that might work better for you.

The core idea to simplifying your financial system is that simpler is easier to understand and remember. What’s easier than remembering? A picture. It speaks a thousand words!

The first step is to draw a map of what your finances look like today, I call this a financial network map. Not the sexiest name but it describes what it is perfectly – a list of your financial accounts and how they are related. 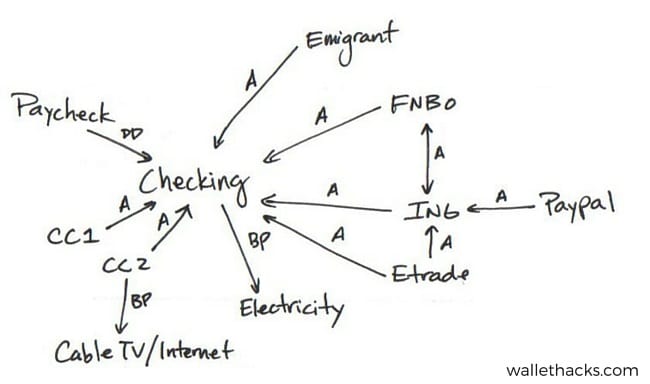 Once you’ve drawn this map, it’s time to start paring away redundant accounts. How many checking accounts do you need? How many credit cards? If two of them serve the same purpose, can you consolidate them? Your goal is to have as few accounts as possible without sacrificing the integrity of your money system.

For quite a while, I had multiple online savings accounts. I opened them to review them and chase the highest interest rates. Over time, their interest rates all settled into the same tiny miserable range and I had a few hundred dollars here, a few hundred dollars there. It was not hard to transfer the remaining funds and call the bank to close them. Five or six bank accounts quickly became just one and I don’t lose anything.

With credit cards, consolidation was a little trickier because there is a negative impact to closing a credit card. When I had two cards from the same issuer, I looked to consolidate balances into the older card.

This reduced the number of credit cards but kept the oldest and maintained the same total credit limit. In the case of multiple issuers, I merely stuck the card in my drawer. It was out of sight, out of mind and off this map.

This is just one approach to simplification. Another way is to draw your ideal financial system, with account labels rather than actual accounts, and then plug in your current accounts. The ones that are left over, as in not included in the map, are the ones you’ll close.

Still another tool that can help you simplify your finances if this effort seems overwhelming is Personal Capital, a free online tool that makes it easier for you to track your expenses and manage your money.

As someone who has taken the axe of de-cluttering to many aspects of my life, de-cluttering my finances was one of the best decisions I ever made. Every month, when I go to review my finances, I thank myself for having removed so much dead weight!

What’s one thing you’d like to simplify with your finances? Do you prefer to have many accounts spread out, or just a couple? How much time do you spend managing your finances each month?

Jim Wang writes about unconventional strategies and tactics to get ahead financially and in life at Wallet Hacks. Join his free newsletter and see how he’s been able to put hundreds of dollars into some readers’ pockets with his advice.