Why You Shouldn’t Buy A House

Many are told you need to buy a house to amount to anything, but it's not for everyone. Here are some reasons why owning a home might not be for you. 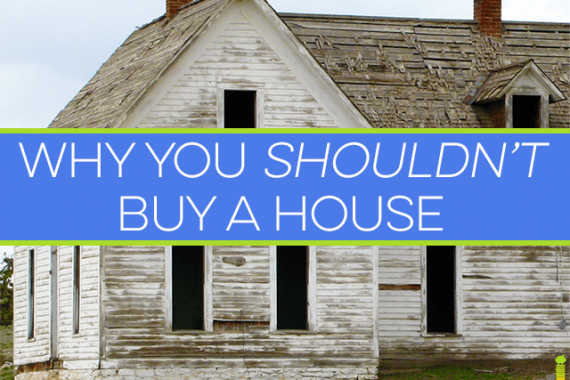 Home » Save Money » Why You Shouldn’t Buy A House

Buying a house is often considered part of the American Dream. Coupled with things like Mom, apple pie and baseball, owning your own house is thought of by many to be the thing we all should do. To say otherwise usually brings on controversy and thoughts that the person left the ranch a long time ago.

Well, get those cyber stones ready – I think there are many times where buying a house is one of the worst things you can do for your finances and personal/professional life. This isn’t to say that owning a home isn’t a good thing to do, because it very much can be, but as with many things related to money, it’s not something that should be accepted blindly.

We Live In a Changing Culture

It’s no surprise we live in a changing culture. From a cultural, political and professional aspect we’re experiencing a lot of change. Change can be a good thing but there can often be ramifications with that change.

Take the workplace for instance. We’re seeing a shift in more independent or contract workers. While some might argue that’s a bad thing, I have benefitted greatly from it, as we have been able to grow a solid business as a result. What that begets is fewer people spending their entire careers with one company. In fact, it’s now become a relatively good thing to move to a variety of different careers over the course of a professional life.

A change like this requires flexibility. It requires the ability to make a move when needed. That is flexibility that may not be available when you buy a house. In fact, it can be the opposite. Added to that, MarketWatch reports that younger generations are putting off homeownership for a variety of reasons – including growing student loan debt.

Does this necessarily mean those who are younger and not looking at homeownership are any less financially prudent if they’re still pursuing many other financially positive things? I don’t think so.

You Can Be Responsible and Not Own a House

This may be a shocker, but individuals can still be financially responsible and not own a house. I’d say there are certain instances where you could argue a person is better off financially because they don’t own a home. I know there is the “throwing money away on rent” argument, but does it really make sense to look at homeownership if you have little to nothing to put down as a down payment?

Personally speaking, buying our current house is one of the worst money mistakes we’ve made as a family. We were expecting our first child, I had this preconceived notion that having a family meant we HAD to be in a house and off we went. That resulted in us getting in with no down payment and having to pay the ridiculous PMI and, I’m sure, a higher interest rate. If I could go back, I’d have waited a year or two to save up some sort of down payment then buy a house.

You can still be financially healthy and not be in a house. The goal with finance should be to improve your net worth and in some cases that very well may not include a house – and that’s ok.

There Is a Tradeoff With Everything

That being said, there are some great things about owning a home, such as:

Of course, this also means the following:

However, there are also some good things to look at in terms of renting, such as:

But, you must consider the following:

There are many things to consider when it comes to buying a house, very much including whether or not you should actually buy. Take it on with the seriousness it requires, but also realize there is nothing wrong at all with renting. If you’re doing it because it’s THE thing to do or because you’re told it’s what “adults” do then now very well may not be the right time for you to buy a house.

Additional resource: If you’re looking for a simple way to stay on top of all your finances so as to know whether or not you’re financially ready to buy a house, then check out my favorite tool – Personal Capital. Completely free, it allows you to track your spending, monitor your bank and investment accounts and watch your net worth grow plus many other tools.

When do you think it makes sense to rent rather than buy? What kind of value do you put on the flexibility of being able to move when you’d like? If you rent, how often are you told that you’re being foolish in doing so?