13 Scary Money Statistics and How to Change Them 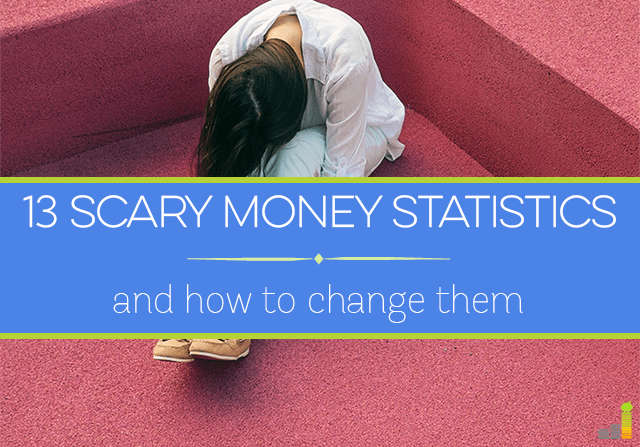 I do a lot of reading, which usually results in me seeing a lot of scary money statistics. Between research for posts here on Frugal Rules as well as my freelance writing clients, there’s ample opportunity for doom and gloom. Some of these statistics on money really aren’t that surprising as we’ve all heard them, but others are downright head scratchers.

It’s easy to look at some of the reported numbers and believe all is lost. That’s not the case, in my opinion. Looking at numbers in a vacuum can be a bit misleading, or make you think they can’t be turned around. To address the latter point, I’ve included an action point for those wanting to improve. After all, it was someone that took the time to give me action points and a little tough love that helped me overcome my problems with debt.

With all that being said, I thought I’d share 13 scary money stats (Halloween is this week after all 🙂 ) and an action point or relevant Frugal Rules post to help attack the issue. They’re not meant to oversimplify the action needed for change, but rather are simply a means to get started in the right direction.

1. We have $165 billion in food waste. I knew there was a lot of food waste here in the States, but John Oliver’s episode a couple of months ago dealing with food waste revealed the magnitude of the problem. We waste $165 billion in food each year or roughly $520 per person each year. Put another way, it’s enough to fill 730 pro football stadiums. Ironically enough, 1 in 6 people in America deal with hunger daily. It’s mind boggling that we’re dealing with each issue, though they point back to the same problem.

Food waste is the much easier problem to solve. It comes down to appropriate meal planning and viewing the food you’re throwing away as money you’re putting in the trashcan.

2. Waiting to save for retirement until age 45 means you have to put away three times as much as someone who starts saving at age 25. This scary financial statistic is thanks to the folks at the Center for Retirement Research. The underlying problem is not understanding compound interest. I know it may feel like you can’t start saving for retirement when you’re young and have little money, but it can be done.

Think of it this way, the longer you put it off the more you’re harming yourself. Find a broker, like Betterment that allows you to start investing with no minimum balance requirement, and start. If you have access to a 401(k) match then take it – it’s free money. It might feel like that extra $50 per month won’t do anything for you but trust me, it will.

3. We spent over $70 billion on the lottery in 2014. I know playing the lottery can be fun. We’ve played it a few times ourselves, when the jackpot is like $500 million. But when you see that $70 billion spent equates to $300 per year per adult you start to wonder how else that money could be used to grow wealth. There’s nothing wrong with dreaming about leaving your job but there are many other ways that money could be better spent, in my opinion.

4. 51 Percent of Americans are putting off major financial decisions. This isn’t necessarily a scary money stat, as it could be for legitimate reasons. However, the American Institute of CPAs (AICPA) found that over half the people they polled are putting off major decisions due to finances. Those decisions range from buying a home to starting a family to saving for retirement as well as having multiple goals to tackle at the same time. The study shows some of the problem goes back to consumer debt and lack of savings. I believe the underlying issue here is, of course, making wise financial decisions but also goal setting that’s in tune with your priorities.

5. 25 Percent of Americans making at least $100,000 per year are living paycheck to paycheck. This money statistic was reported by CNBC earlier this year, which also reports 33 percent of those making $75,000 or more are in the same predicament. I’m not going to pretend to know the reason behind these statistics though it goes to show you that just because you make a good salary doesn’t mean you’re good with money, as the study shows many respondents admitting to poor financial decision making. This, in my opinion, requires having a long-term view of money and putting off things in the present to save for the future.

6. $40 of your monthly gym membership is wasted. Statistic Brain reports Americans who have gym memberships waste $39 of it per month due to lack of use. Over the course of a year that equates to $468 of waste. That may seem like nothing, but that lack of use directly impacts the amount of money you have working for you each year through misuse – which can add up to real money. Working out at a gym is a great way to lose weight…if you’re going. I lost 100 pounds by not stepping one foot in a gym, rather finding other ways to work out. It can be done with a little creativity.

7. 2.5 million Americans took out car title loans in 2014. I know this may not seem like a terrible number in relation to the number of cars on the road, but as Yahoo Finance reports, these kind of loans are worse than payday loans. There are a number of reasons for this, largely coming down to the ease of securing said loan.

If you don’t make the payment in time you risk either losing your car or getting more money added to the loan – which can be more than you can get under a typical payday loan. I’m not certain as to the solution, other than to avoid being in this situation. Finding ways to make extra money or getting an unsecured personal loan to consolidate all outstanding debt is a start as it would allow you to pay less in interest and fees.

8. 21 Percent of Americans aged 75+ are carrying mortgage debt into retirement. Mortgage debt is generally considered “good” debt, but I’d venture a guess that mortgage debt isn’t really a good thing when you’re over 75. USA Today reports the number for those aged 55-64 is 30 percent and those people are carrying an average balance of just over $100,000. At a time where individuals should either be preparing for, or in retirement this is a scary financial statistic. Again, there may not be a true solution to this, aside from better preparation, but it is concerning given needs that could arise with caring for aging parents. 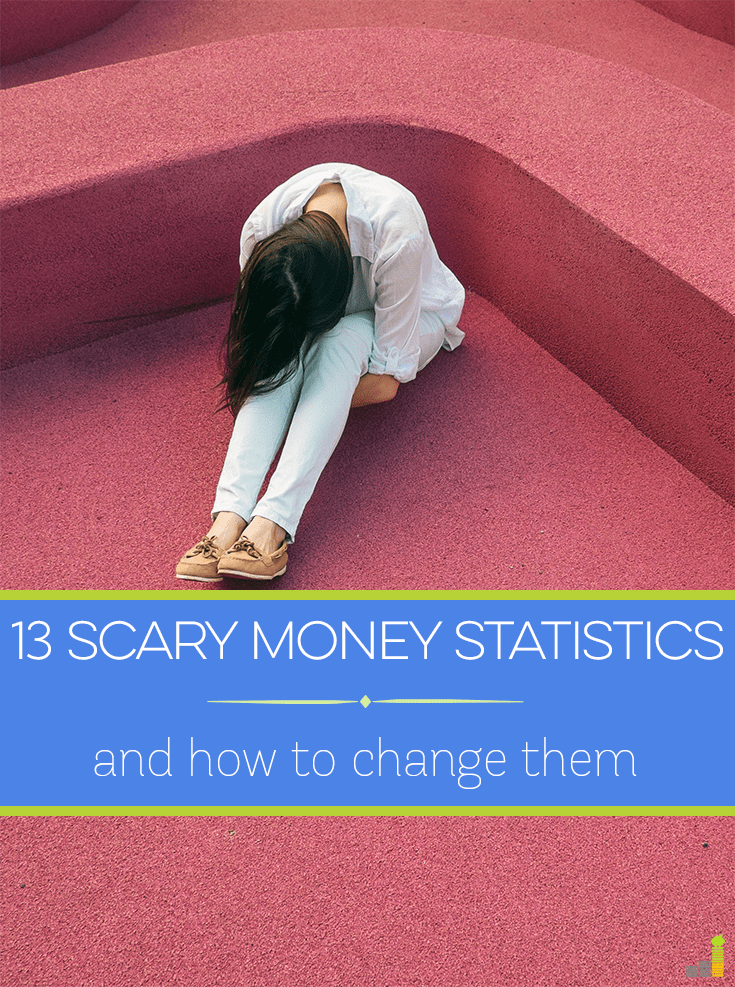 This may not seem like much, but consider the impact of having an even higher fee product or investing more than $100,000. That can lead to a significant chunk of money that could be better served in your wallet – not someone else’s. This is where a tool like Personal Capital can help you as it helps you find lower fee alternatives.

10. We spend $3.1 trillion on health care each year. Yahoo Finance reports this scary money stat and it’s really not all that surprising. We’ve dealt with this in our family as we’ve seen our health care costs skyrocket and know we’re not alone. What’s even scarier is that we don’t even get value out of the spending as other countries’ spending goes much further. As to a solution, I have greater confidence of becoming fluent in Portuguese than seeing something done.

11. 61 percent of parents feel more comfortable talking about finances with an advisor than they do their adult child. Fidelity reports that we’re generally more comfortable speaking with a professional about money than we are our family. The poll also shows that 57 percent of adult children feel the same way. I don’t know that this is necessarily a scary money statistic although it does reveal a potential lack of knowledge about future wishes. Mixing family and money can be tricky, but more communication between parents and adult children generally leads to relatively good things for all involved and if it includes an advisor then even better. 🙂

12. The average car payment is now over $480. Car payments are often attacked in the personal finance community. We’ve had them in the past, though we plan to never have one again. I really think it comes down to personal preference is some situations, but in many others it’s concerning to see so much spent each month on a depreciating asset. A car is a necessity for most, there’s no denying that, but it can be done without the shackles of a massive car payment.

13. 52 percent of Americans would not be able to cover an emergency of $400. The Federal Reserve reports a majority of people polled would need to sell something or borrow funds to cover an emergency amounting to $400. This is honestly one of the scarier money statistics in the post as a $400 emergency isn’t all that much to speak of – it could be a relatively minor car repair or your air conditioner going on the fritz.

Experts debate how much you need in an emergency fund, though I tend to say 3-6 months of living expenses is a good range to aim for. I know that’s a lot of money for many. Don’t let that hold you back! Start saving $50 per month until you hit $500 and grow it from there. Having incremental goals will build momentum and get you where you need to be much quicker than simple avoidance.

I don’t want to end the scary money statistics on a sour note. The same AICPA study I mentioned earlier reveals some bright spots, especially since the Great Recession:

Statistics aside, I know it can be a challenge to feel like you can make any headway when things look bleak. Don’t give into that feeling. Rather, take one thing and find a way to tackle it, one day at a time, and then take on another. Put one foot in front of another and you’ll be amazed at how far you can get.

What scary money statistic stood out to you the most? What’s one bright area you see? What’s one area you’d like to start focusing on in the near future?