Sometimes comparison shopping for projects makes sense and sometimes it doesn’t. Find out how to get the best deals on all your projects - large and small. 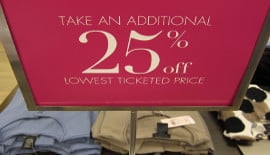 The following is a contribution from our friend Edward Antrobus.

Recently, I embarked on a quest. Instead of getting ideas from other personal finance bloggers, I wanted to get the opinions of average people on the topic of frugality. I started asking friends and coworkers one simple question: what is your favorite way of saving money? When I asked Charlie, his answer was comparison shopping.

Charlie recently remodeled his kitchen. Kitchen remodels are one of those expensive things that everybody knows they need to shop around to get the best price. For most people, that is getting the best quote from a general contractor or the best price on a couple of big ticket items such as the cabinets or flooring.

Charlie priced every single thing he bought, down to the nails. He also acted as his own general contractor and hired out sub-contractors, getting them to bid against each other. He figures he shaved a grand off his costs by being a savvy shopper.

Okay, so you should be comparison shopping. But how do you go about it? Sure, sale prices are easy to compare with sales circulars that come in the newspaper or can be found online. But for regularly priced items, you could spend more in gas driving to different stores than you might save.

Who has the best price for horizontal blinds? I recently had to replace the blinds in my home office and there are ten different stores in town that sell them. To check each one would have involved driving about 40 miles and spent the better part of a day. That’s an awful lot for a purchase under $10.

As it turns out, K-Mart had the best price at $4.99 for my 35” window. That was half the price for a basic horizontal blind compared to Home Depot.

Pretty much everything I buy these days, I price online. Do I need to replace a window fan? I can find out the price from K-Mart, Walmart, and Target in five minutes. Or maybe a better price can be found online. Ebay, Amazon, and Google Shopping will tell me in just a few more clicks.

Sometimes, I will have a list of items I need to buy. Maybe I have a home improvement project going on. Chances are, no single store will have a lock on the lowest cost for each item on the list. By using online stores to comparison shop, I can plan out my stops, starting with the store farthest away and working my way back home.

No back-tracking, or returning to a store I’ve already left because they were cheaper; most importantly, no finding a cheaper price after I’ve already made my purchase.

But this tactic doesn’t work with just home improvement items. I use the same tactic with groceries. Several large supermarket chains are adding home delivery options to their list of services. What began as a service for shut-ins and urban dwellers can now be utilized by more people than ever. I don’t actually use the service myself, but it is handy for comparing prices online.

I already know that meat is cheaper at my local Albertsons than the King Soopers I do most of my shopping at. But some items are purchased only for special occasions. Is my regular grocery store the best place to buy wonton wrappers? It turns out not.

Another new development in the world of comparison shopping is smartphone apps. Whether you have an iPhone or Android, there are several apps that will scan a bar code and tell you if there is a better price somewhere else.

There have been plenty of times in my life that I have been out shopping and remembered an item that I forgot I needed. I’m not going to go back home to check prices online. But there is no guarantee that the store I am at will have the best price. Now, there’s an app for that. I just whip out my phone and scan the barcode.

Do you ever try comparison shopping? What other methods do you use to make sure you are getting the best deal?

Editors note: Edward offers some great advice! My wife and I regularly find ourselves comparison shopping when contemplating purchases. Thankfully we can do that on the go with my smartphone and save ourselves money.

The following was a contribution from Edward Antrobus. Edward is a construction worker, blogger, tinkerer, and househusband. He writes about frugality and occasionally rants about what he thinks the personal finance community gets wrong.