5 Simple Ways We Save Money On Kids Toys

You can save money on kids toys if you're creative. I share my go-to ways to save money on toys that our kids love and keep more money in our pockets. 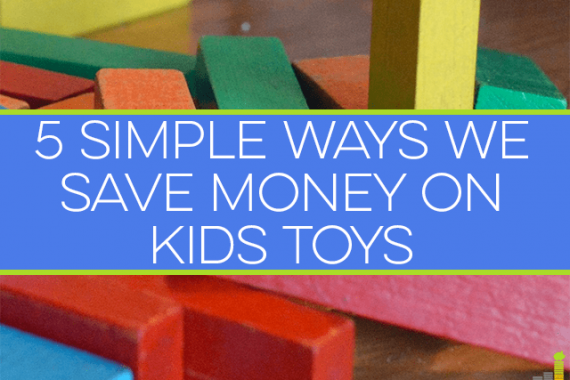 This post is part of the TaxACT How I Save blog tour which teaches you ways to keep more money in your pocket. Last year, TaxACT saved America over $240 million on tax preparation. How much can you save? To learn more about tips and strategies on saving, click here.

I realize the Christmas shopping season may very well be over and thus the drive to buy kids toys is over for another year. As a father of three and a growing extended family, I can tell you that you’re never really over when it comes to buying toys for kids. Well, that is unless everything falls at the same time on the calendar. That said, you likely know that many think it can be a challenge to save money on kids toys. As a parent, or any gift giver really, it can be difficult to not give in to that desire to spend more. Because, let’s face it, spending more just outright guarantees the recipient will enjoy said gift more. 😉

Seriously though, Mrs. Frugal Rules and I are human and have given into that feeling in the past and decided a number of years ago that we were going to stop. After all, the little Frugal Rules’ have three sets of grandparents, not to mention other family members who shower them with gifts and toys so why should we inundate them with more stuff to , err…, play with?

That’s also not to mention the fact that it just adds more clutter to the house that we don’t need. We still buy toys, but we’re frugal about it. We look for deals. We’ve drastically cut back the budget for them and many other things. So, if you’re looking for ways to still score toys your kids will love and not give into the pleas for a large gift, then hopefully some of these tips will help.

How to Save Money on Kids Toys

Buy second-hand: I think my Mom had heart palpitations when we told her we buy second-hand for our kids. Here’s the thing, any kid under five is going to beat the crap out of most toys. If you have a good eye for a deal you can spend a fraction of the cost of buying new by visiting sites like Ebay to garage sales to the Goodwill. With a few sanitizing wipes it’ll be like new and they don’t notice a thing.

Give a group gift: This obviously works when there are multiple kids. If you know that they will all enjoy a toy or game then buy it for them all and spread the cost amongst them. We’ve done this numerous times and it makes for three happy kiddos.

Know the time to buy: This really applies towards the Holiday season, but buy a few weeks before Christmas as the best prices are to be had then and not on Black Friday.

Compare Prices: This is an easy one, but you’d be amazed by how many people don’t compare prices on toys. We do this and it saves us money nearly every time. There was one toy in particular that was nearly half off on Amazon as opposed to Target this past Christmas. Suffice it to say, we got it on Amazon.

Making Money Work For You

We try to spend less on toys for our kids because we want to make our money work for us – which also has the dual benefit of helping us teach them about making wise money decisions. For example, this past Christmas we spent roughly $40 on each kid which left $110 left over for each child. We took $90 for each to put in their 529 accounts and the other $20 was saved for some sort of activity they may want to do throughout the year.

So, instead of blowing our entire budget on toys that would just clutter up the house and overwhelm them we’re able to get them a few things they’ll get hours of joy out, have money set aside for something fun during the year and, more importantly, put some money away for their future needs.

Saving money on everyday things, such as toys, doesn’t have to be difficult, you just need to be creative and look at your priorities. As we’re fresh in the New Year, I challenge you to find new ways to save money so you can have more of it in your pocket as opposed to going out.

To help you towards that end, make sure to fill out the Rafflecopter widget below for the giveaway that will allow you to win one of ten copies of TaxACT Deluxe!
a Rafflecopter giveaway