Rant Warning: When Was the Last Time You Ate? 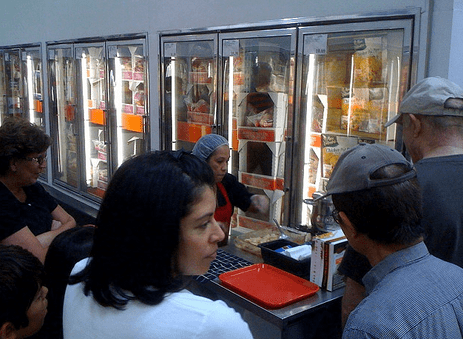 It has been a while since I had a good rant, and I would like to credit my blogging buddy, Mr. 1500, for getting my creative rant juices flowing. Like him, I am a very observant person. You could ask Mrs. Frugal Rules and she’d likely say that I am TOO observant, but alas, being so observant means I often see things that make me wonder what on earth some people are thinking and why they do the things they do. While it’s easy for me to notice many things that puzzle me, it also means that I often notice things that warm my heart. For instance, as I type this, I notice the two oldest Frugal Rules in a bubble fight that is making the littlest Frugal Rule squeal with delight. For today’s post though, I’ll be focusing on the things that more so drive me nuts.

I know that I have written about this before, but haven’t people eaten for the past two weeks before they step foot in a Costco? I mean, seriously people, must you line up and clog the aisles to get your mitts on a half inch square of fake bacon (or facon as I refer to it) or a spoonful of yogurt? I like to get something free like everyone else, but if you’re THAT hard up then maybe you shouldn’t be spending the money for a Costco membership. Getting the sample is one thing, but if 10-15 people are already standing in line for the free whatever, for the love of Pete move on so the rest of us can get by!

I love my kids and will do anything for them. Any parent of a little one will know they love and crave repetition. However, that repetition can be a bear to deal with. Case in point, if I hear the theme song from Jake and the Neverland Pirates humming on our Netflix one more time I may pull whatever little bit of hair I have out of my head.

HostGator…oh HostGator! If you weren’t aware, half of the internet was broken last Friday. Sadly, the issue was spread amongst many different hosting companies – HostGator, Bluehost, JustHost, etc. – all companies under the umbrella of Endurance International Group, or EIG for short. Now, I know that things like this happen and expect that to a certain extent. Having it happen is one thing, but being in the dark about it is another. My problem isn’t so much with the outage, but with the complete lack of communication on HG’s part. I would understand it if they were a one man shop, but they’re a huge company that provides hosting services for hundreds of thousands of sites. Is it really that difficult to communicate with your clientele during serious outages to give updates as to what is being done? Isn’t there a group of people that can man Twitter or send out group emails with updates as to what is going on? Apparently there’s not, and as a result, many of us with HG went hours on Friday not knowing when our sites would come back up. It makes me wonder just how many employees were needed to reinstall the plug that apparently had been pulled! Or, just how many clients HostGator thinks it can jam on its servers. As someone who earns income off their site, it was incredibly frustrating. As a business owner, it made me wonder just how many clients they would be losing as a result of their lack of care and concern. Thankfully I’ve found another hosting service that we’ll be moving our sites to in the very near future. My new host treats server traffic like an 8-lane freeway on a Sunday afternoon and not the 5 in Los Angeles at 5 p.m. on the Friday before a holiday weekend. I’ll cut this short so it doesn’t become a HG hatefest! 🙂

Why is everything “newsworthy” always “Breaking News” and why on earth is it forced down our throats for weeks ad nauseum? You’d think that by watching any of the major news stations there was only one thing happening in the world, but they’d rather not cover the real news. Thus, why I get more and more of it from NPR.

I know that everyone is busy, but is a little time management that difficult to undertake? What chafes my hide is someone showing up to a meeting and getting no notice or apology. Happening once or twice is one thing, but if you’re regularly doing it then it’s time to shape up. Oh, and that smart phone you have your nose buried in…it likely has multiple clocks on it.

We have a stretch of road outside of Omaha that has been under construction for over five years. In all my years of driving it I have yet to see anyone working on it. I have driven on it at all times of day and night and there is never anyone there, yet they have cones all over the place and the speed limit is cut down to 50 mph. Government inefficiency at its highest. Maybe they could throw some money our way and fix some of the axle breaking potholes in the city…just a thought. 😉

Why in the hell do airlines overbook so much?! I understand they want a full flight, but when you oversell dozens of tickets it gets a little out of hand. My youngest brother flew out here a few weeks ago and was told he was on standby even though he had bought the ticket three months prior. He got bumped to a later flight and ended up arriving at 3 a.m. Thanks United, I wanted to stay up all night!

I know grocery shopping can be crazy, especially if you’re with kids. But, why on earth do some people find the need to stop and camp out in the middle of the freaking aisle for minutes at a time? If you need to find something, I get that, but do us all a favor and pull over to the side so others can get by.

The Home Shopping Network. We have a certain family member who sends us crap all the time and that’s exactly what 95% of it is. Thanks to being inundated with this crap we’ve gotten put on all sorts of mailing lists which just get thrown instantly into the recycling bin. It’s not all bad though, we’ve sold a number of said items on Craigslist and made a little bit of coin off of it.

Why do some people find the need to email bomb you to death? We know someone who sends us easily 10+ emails/forwards a day. Apparently, Obama has myriads of “secret” tax plans, there really are three families ruling the entire world, and Bigfoot has been cited…and he’s mating with Nessie…aka the Loch Ness Monster.

Captcha that requires a PhD in hieroglyphics to decipher. Enough said!

Oh, the inventor of the double Captcha should be shot!

What have you observed lately that drives you nuts?