How to be Proactive About Paying Off Debt

Paying off debt is a struggle that takes time and effort. Here are 6 ways to be proactive about killing your debt and make the process simpler to follow. 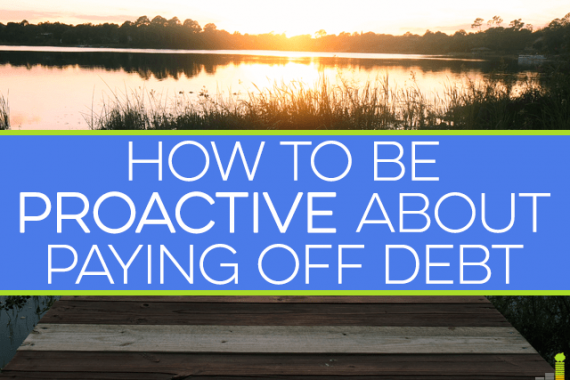 Home » Attack Debt » How to be Proactive About Paying Off Debt

A lot of people say they want to pay off debt, and then never follow through with it. Procrastination is a real struggle when it comes to personal finance, and paying off debt is no exception. It requires a big commitment, one that can span years.

People often get overwhelmed at the mere thought of working their way out of debt, which doesn’t help the situation. What does help is being proactive about paying off debt in the first place. As with most things, the first step is the hardest, but once you commit, the rest tends to fall into place.

If you’re tired of drowning under a pile of bills, here are a few ways to get proactive about paying off your debt.

This is a tip I’ve actually been meaning to implement. The only debt I have is student loan debt, and under the standard repayment plan, I have 10 years to pay it off (well, seven now). Technically there’s an end date, even though it’s not ideal.

I’ve been paying extra toward my student loans, but I’ve never calculated a payoff date because I figured life would throw its curve balls and I would have to change plans. While that has happened, not having any idea of when I’ll pay them off has made my journey a little aimless.

When you have credit card debt, or any type of revolving debt, you don’t have the luxury of an end date. Your credit card statement might show you how long it’ll take to pay off your balance by paying the minimum amount, but that’s not a good example to follow. Paying the minimum isn’t being proactive!

If you want to work toward getting out of debt by a specific date, you just need to run a few calculations. I’m assuming you’ve already set yourself up with a budget (if you haven’t, check here for tips on how to create one), so you should know how much money you can dedicate to your debt each month.

Divide your total debt amount by that number and see how many more months you have. Then estimate when you’ll be debt free. For example, if your total debt is $9,400, and you can pay $250 towards it each month, it will take you around 38 months (just over 3 years) to pay it off.

Whenever you lose motivation, you can keep your debt free date in mind as something to work toward.

Decide on a Repayment Strategy

Your intentions might be good, but that’s probably not enough to carry you through your debt payoff journey. Saying “I want to get out of debt” and following through with it are two different things.

How can this help you be proactive when paying off debt? Simple: it gives you focus because you’re targeting one loan. Deciding on a repayment strategy means you’ll feel less overwhelmed than if you were to try and pay extra on multiple loans.

Pay Extra Throughout the Month

Besides the debt avalanche and debt snowball methods, there’s something called the snowflake method. This approach helps you attack debt by paying extra toward the one loan you’re targeting whenever possible.

This takes a lot of discipline. Theoretically, if you find $10 in your coat pocket, get $1,000 from your tax refund, or receive $200 in gift money, it should go toward your debt. Any amount helps reduce the balance.

If you want to dial it down a notch, you can make biweekly payments. Just divide your total payment in half and pay that amount every other week. This is a popular method when paying off a mortgage quickly as you’ll make more of a dent in the principal balance as less of your payment will go toward interest.

Pay Bills as They Arrive

Have you gotten into the habit of avoiding statements when they come in the mail? It can be hard to face the pile of bills you have, but that’s not being proactive. You should aim to pay your bills as soon as they arrive, whether that’s by email or postage.

I would suggest going a step further by automating your payments. You can set up recurring monthly payments with most creditors. This will keep you on top of payments, and you’ll be able to supplement that payment throughout the month when possible.

When setting up automatic payments with revolving debt, remember to set your payment above the minimum amount as that’s often the default choice. You can always adjust it later if need be.

Nothing says you’re taking action on your debt like calling your creditors and trying to negotiate a lower interest rate or balance. You might not think it’s worth the time, but making a few phone calls won’t hurt.

My parents had success with this. I worked with them to create a debt repayment plan, and during the process, they realized just how much interest was accruing on their debt.

My mom called their creditors and told them they were retired and living on a fixed income. She asked if there was anything they could do to lessen the burden as they were trying to work their way out of debt and had been making timely payments for decades (ouch). She was able to get the interest rate lowered by a few points.

I wouldn’t suggest creating a fictional sob story, but be polite and honest when explaining the situation to your creditors. If you don’t succeed the first time around, keep calling back once a month. Getting a different representative may help. Another option worth considering in addition to calling your creditors, or if that doesn’t achieve the result you desire, is to look into consolidating your debt through an unsecured personal loan. If it would mean lowering your overall interest payments and having one payment per month versus many payments of varying interest rates, it may help you pay down your debt faster and make your life a little less hectic.

Once you set a debt repayment plan, you must evaluate your progress along the way. You have to continue to be proactive throughout this journey. I’ve seen many people begin with gusto, only to die out later from debt fatigue.

Somewhere along the way, they get discouraged. Maybe they’re not seeing the progress they had hoped for, or maybe a time of financial difficulty befell them. I’ve had both happen to me, and it can throw your debt repayment efforts off track. It’s important to check in every so often to make sure you’re still on track. If you’re not, then you can figure out what went wrong and change course. As long as you keep moving in the right direction, you’ll reach your destination.

Additional resource: If you’re working to pay off debt but making little progress you may benefit from consolidating your debts into one loan to lower your interest rates. In many cases you can lower your rates by at least 10 percent, which means more of your monthly payment goes towards killing your debt once and for all. One of the best options to consolidate debt is through Lightstream who offers rates as low as 1.74 percent with AutoPay.

Check out the rates at Lightstream today!

When you first started paying off your debt, were you proactive about it? Did it take you several tries to get serious about your debt repayment? What action did you take that helped you the most?