Why Hope is Necessary When Paying Off Debt

Paying off debt can be a long and arduous process. It's easy to feel overwhelmed to the point where you lose hope. Hang in there! Brighter days are ahead. 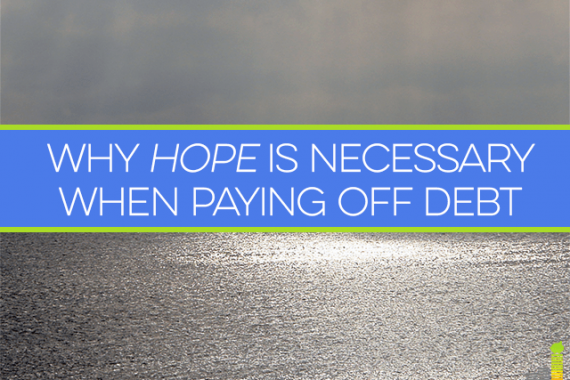 Home » Attack Debt » Why Hope is Necessary When Paying Off Debt

How does being in debt feel most of the time?

Does it feel similar to being stranded on an island, frantically waving your arms, hoping someone will notice and come rescue you?

Does it feel like you’re out in the ocean with wave after wave crashing into you, never getting a chance to breathe?

For those of us in debt, life can often seem like one dark tunnel with no light at the end. We fumble through, feeling lost, desperate, frustrated, and tired.

I’m here to tell you it doesn’t have to be that way. In fact, it shouldn’t be.

I know feeling positive in the middle of killing debt can be difficult (I’ve been there), but hope is necessary when paying off debt. Absolutely necessary.

Without hope, you’ll never reach the end of that tunnel. You might lose your way forever. You might give up and resign yourself to debt.

Don’t. Here’s why you should maintain hope in spite of debt, and how you can do it.

Hope Allows Us to Keep Moving Forward When Paying Off Debt

Anyone paying off debt knows if one month goes bad financially, it can be tempting to throw in the towel. If you can never get ahead, what’s the use?

That’s not the right way to think.

Last year, I moved several states away, and faced a lot of new costs. Every time I tallied up my expenses in the proceeding months, I wanted to cry.

That was on top of transitioning to self-employment. I had next to no income, and I felt down about my financial situation in general.

I was only able to put the minimum toward my student loans, and I lost all enthusiasm for paying them off quickly.

Looking on the bright side helped occasionally – after all, my fiance was still earning an income, so we weren’t getting into further trouble.

I still felt like I had reached a plateau, though.

Fast forward almost a year later: I’m earning much more than I was before and we’re paying extra again. Plus, our combined tax refund is around $3,500 (I overpaid). We’re 90 percent sure it’s all going toward our student loans, and I’m excited about the dent it will make.

The situation I was in last year wasn’t permanent. Keep the big picture in mind when paying off debt!

Momentum is everything, and continuing to have hope will get you over those pesky plateaus you’re bound to experience from time to time.

How many of you daydream about the day you’re free from debt, or what you’ll do with all the money you’ll have after it’s gone?

I do! My minimum payment might be insignificant to some people, but I can’t wait for the day I’m no longer beholden to a lender.

However, if you don’t have any hope, you might not think you’ll ever get there. Where’s the fun in that?

Staying motivated along your journey to debt freedom can be tough, but it’s necessary to keep going. Give yourself something to look forward to, even if that means (responsibly) rewarding yourself once in a while.

If you have trouble staying motivated, write down your “Why” for getting out of debt. If you have more than one, great! Keep your reasons close to you and review them whenever you’re struggling.

Having a hopeful attitude in general does wonders for you. I spent many years being a pessimist, and it doesn’t make anything easier to handle.

When you’re in the middle of paying off debt, it can be difficult to practice gratitude.

After all, it’s easy to get caught up in berating yourself for mistakes you made in the past. It’s easy to get annoyed with things that are out of your control (such as your car breaking down).

However, remaining hopeful allows you to keep your head up and recognize that things could probably be worse. You’re more likely to focus on the good in life, or on the progress you’ve been able to make.

How has this worked for me? I’m actually grateful to have this experience of paying off debt. I’ve learned many valuable lessons I wouldn’t have otherwise, and it’s made me a stronger person.

I’m going to end with a little personal story.

As I “only” graduated with $18,000 in student loan debt, and haven’t had any other debt of my own, I often use my parents as inspiration.

They’re average people who made a few bad decisions when it came to using credit cards.

Unfortunately, those bad decisions were compounded when my dad was laid off. Twice. And my mom was making half of what he made.

There were a few close calls over the years, and there were times when I didn’t think my parents would recover.

Every time they managed to set aside money for an emergency, something would happen and the fund would be wiped out. They were never able to build any momentum. They took one step forward and three steps back.

However, I’m glad to say the story has a happy ending. When my dad was laid off, my parents decided they would retire once I graduated from college. They were able to sell their house, move to an area they love (which happens to be cheaper), and purchase a home outright.

They were able to use the money they had leftover from the house sale toward debt, and my mom continues to work (mostly because she likes keeping busy).

In fact, she told me over the weekend that within a few months, two of their loans will be paid off. That leaves them with two more.

The key is, they never gave up hope. While there were fights and tears shed over the years, my parents made do with what they had. They were frugal and didn’t keep up with the Joneses. They (reluctantly) accepted help from family who wanted to offer it. They eventually made their dream of retirement into reality.

Their situation isn’t glamorous, but it doesn’t have to be. They’re happier than they’ve ever been because they’re finally in a financially secure spot. They have savings, they have a home with no mortgage payment, they have a fixed income coming in, and my mom is earning extra. They budget and live within their means.

This is quite the turnaround from the situation they were in just five years ago.

Even though it might seem like time is dragging by, as long as you keep working toward your goal of being debt free, you’ll get there, and it will be worth it.

Are you paying off debt? How has your attitude towards it been lately? How do you feel today about your debt? What are you most looking forward to about being debt-free?