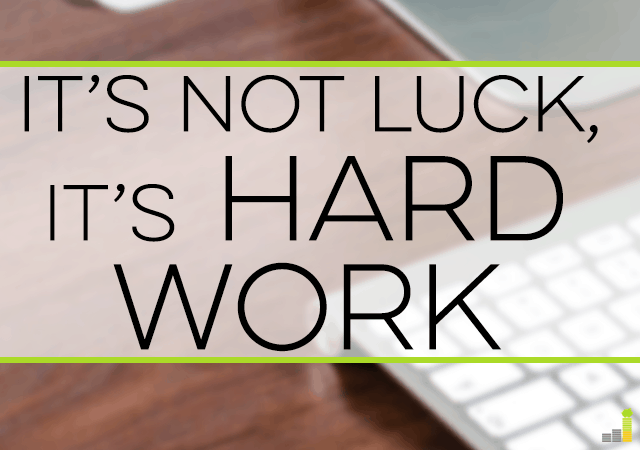 I wish I had a million dollars saved up in my retirement account. Must be nice.

Why am I the only one who has bad thing after bad thing happen to them?

How many times have these kinds of thoughts gone through your head? I’m betting at least once or twice. As humans, we seem to have an uncanny knack for writing things off as good or bad luck.

With many aspects of personal finance, rationality sometimes goes out the window. It’s much easier to point to an external force than it is to give credit where credit is due, or to take ownership of our mistakes.

While it can seem harmless in small doses, over time, this negative phrase builds up in our minds and can be extremely detrimental to our financial progress. I’m here to tell you that it’s NOT luck, it’s hard work.

There’s really no such thing as “luck,” and attributing success or bad events to it doesn’t do anyone any good. Yes, things may happen that are out of your control, but chalking it up to “luck” is silly.

It’s extremely easy to point to someone who has retired early and think they’re living the life; that it was handed to them on a silver platter. In most cases, that’s not true. Not even close.

You do yourself a disservice when you don’t look into the reasons why someone has been successful. Behind most success stories lies hard work – not luck.

The overwhelming majority of people don’t ‘luck’ their way into wealth, or into a job, or into debt freedom or into anything else you might be jealous of.

They became wealthy through hard work and being diligent about their finances; they secured a job because they had a connection (they likely worked for) or experience (years of work); they worked hard to pay off their debt, or worked a lot to earn more to pay it off.

Whatever the case may be, stop believing that luck has all the answers. It doesn’t. By basing assumptions on luck, you’re essentially telling yourself that you can’t achieve what others have because it’s happenstance. That’s not true!

You Can Have the Same…If You Put in the Work

I’ll use myself as an example here. I am terribly guilty of looking at the income reports of people who have started their own blogs or online businesses with as little as a laptop, cheap hosting through Bluehost and their smarts and thinking they’re pretty darn lucky to be making $10,000 or $20,000 per month from their business.

Before I was self-employed, that income level seemed completely unattainable to me because I was stuck in a low-paying office job. I was barely making $2,000 per month.

Once I started freelancing, I realized my earning potential was in my control. I realized these people weren’t lucky – their income was a direct result of their hard work. I finally realized I could get there if I wanted to.

Now, my income level still isn’t as impressive when compared to those numbers above, but the point is, I stopped attributing it to luck, which allowed me to take control of my situation. It inspired me to reach for greater heights.

When I wrote wealth off as “luck,” I dismissed it as a possibility for me because, well, I thought I’d never be “lucky” enough to have a high-paying job.

Then I went and increased my income by creating my own job of sorts. Talk about powerful! I hope you can see how limiting it is to believe in luck over hard work with this illustration.

Do You Write Your Own Good Fortune Off as Luck?

Another thing I struggle with (and I’m sure I’m not alone) is thinking that whenever something good happens to me, it’s simply a result of good fortune. It’s not a result of anything I did; it’s just a nice change of pace.

How awful is it to not give yourself any sort of credit? “Oh wow, you got a promotion at work, awesome!” “Yeah, no one else seemed interested in it, and I’m kind of qualified, so I guess I got lucky.” How about saying, “Thanks, I worked hard for it” instead?

Many of my fellow freelancers are quick to dismiss what they’ve achieved, myself included. This is what I was supposed to do – this is where I’m supposed to be – what’s the big deal?

Big deal!? Working for yourself is hard. Building your own business from scratch is difficult. Yet, we never give ourselves any credit. I’ve been guilty of saying I lucked into most of my clients through word-of-mouth, never mind that they’ve only stuck with me because I’ve proven my worth.

Please don’t use luck in this sense of the word, either. It completely diminishes the work you have put in.

The point is, all of the successful people I know created their own success. They didn’t rely on ‘luck’ to make it happen. You can’t make anything happen if you sit around and hope for it. You have to take action.

The best thing you can do is delete the word luck from your vocabulary. Be mindful of when you’re tempted to use it and catch yourself before doing so.

You can experience amazing financial success if you’re willing to put in the work, but you won’t experience success if all you do is equate success to luck. Remove luck from the equation so you can empower yourself to take control.

Have you ever written off a success or failure as good or bad luck? Do you believe in luck? When is the last time you called someone “lucky” for their success? Do you have trouble attributing your own success to hard work?