My wife and I won't be exchanging Christmas gifts this year. Instead, we'll be using the money on something we want as opposed to more crap under the tree. 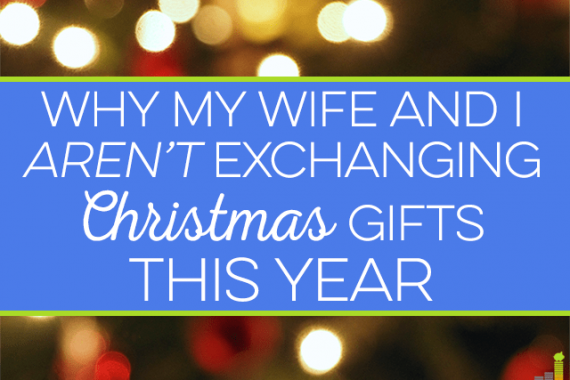 If you’ve checked your calendar lately then you know that Christmas is coming up in a little over a week. How it has come so quickly this year, I don’t know but that’s not the point of the post. I read a recent survey from Deloitte which believes that holiday sales are expected to be up 4.5% from last year to a whopping $986 Billion in sales.

Most years my wife and I have played our part in that number. Having three little kids, each other, and extended family to buy for, we’ve more than made up for our share. That’s not to say we couldn’t afford it, per se, as we always budget throughout the year for the amount we’re going to be spending. However, as we’ve looked back over the past few years of exchanging Christmas gifts, we’ve noticed we’re really just going through the motions. So, we decided to go against the grain this year.

Our decision not to exchange Christmas gifts this year has nothing to do with us loving each other any less. Heck, after 13 years of marriage I’ve never loved my wife more. Just like Grayson said earlier this year when in relation to Valentine’s Day, I don’t need a calendar to tell me when to show my wife I love her. The same thing applies with us for Christmas. But, that’s only half of it.

The other half of our decision, and honestly the bulk of it, is we’re seeing that we’ve just been wasting our money the past couple of years. Yes, the money has been budgeted and we have it there to spend but if it’s on something that’s simply not bringing us value or that we’re not enjoying then it’s simply just more stuff…(cough cough…crap…cough cough) that we simply don’t need.

I know it would be easy to think this is part of me just not being a fan of the Holidays. But that’s honestly not the issue. As we look back over the past several years the gifts we’ve given each other, none of them are memorable. I think a big part of that goes back to us already having what we need and if there’s something we want we simply budget for it and go out and buy it. After some discussion about it we just decided to stop going through the motions this year and relieve ourselves of the stress of coming up with Christmas gift ideas for each other.

What We’re Doing Instead

Before you go and think I’m being a big Scrooge and throwing the towel in on the holiday altogether, give me a chance to tell you the rest of the story. We’re still coming up with a few Christmas gift ideas for our kids and will be putting over half of what we budget for them in their college savings accounts. They get enough stuff from our parents so there’s no sense just to overwhelm them with gifts. We’ll also be giving to those in our family we’ve agreed to exchange Christmas gifts with. Thus, the change is really only with what my wife and I are doing between each other.

We typically budget $150 a piece to buy Christmas gifts for each other each year. We stayed with that same number this year so we have an extra $300 to do something with now. After some discussion we came down to two options. The first is having a date weekend here in Omaha. As any parent of little ones knows it can be extremely difficult to have a date night at times. That’s also not to mention the fact sleep filled nights are few and far between. As a result, we value being able to have a night to ourselves and getting a full night’s sleep. Not exchanging Christmas gifts this year would allow us to stay the night in a relatively nice hotel here in town, enjoy a meal out and have a sitter stay here to watch the kids overnight. That is something we’d get much more enjoyment and value out of as opposed to some unnecessary trinkets.

The other option we’re looking at, and probably a little more seriously, is using the $300 and combining it with some credit card rewards points and enjoying a short weekend trip as a family later in the Spring. We can get to a wide variety of different cities in the Midwest and have more than enough points to score 2-3 nights in a hotel without breaking a sweat. The extra $300 would more than cover gas and money we’d need to have dinners out. We’re leaning towards this option as it would allow us to enjoy some time together as a family and do a little traveling.

On one hand this was a difficult decision for Mrs. Frugal Rules and I to make. We like to give each other gifts, especially at Christmas. On the other hand though it was an incredibly easy decision to make. We see what we’ve bought each other the past few years and nothing stands out. Since we follow a values based spending philosophy it made sense to change things up some and use the budgeted money for something we’d actually enjoy instead of just bringing more stuff in the house we don’t need.

Have you and your partner ever decided not to exchange Christmas gifts? What did you do with the money instead? Do you budget for your Christmas spending? If you were us, would you use the money for a date weekend or a family weekend trip?