Should You Mix Family and Money?

Family and money can be a tricky thing to mix, causing hurt feelings. Here are some things to consider if asked for money from a family member or friend. 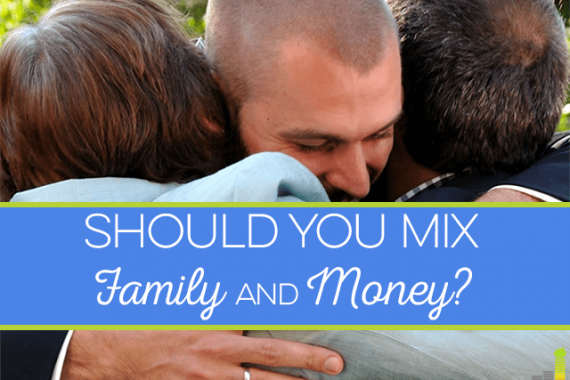 Home » Save Money » Should You Mix Family and Money?

One of the most sensitive topics in personal finance is whether or not you should lend money to family.

On one hand, you have people who say family is family no matter what. In tough times and good times, you should help each other out.

On the other hand, you have people that have been burned (sometimes repeatedly) by their families, to the point where they’re jaded and cynical about it.

So, is it a wise idea to mix family and money? Let’s take a look at some things you need to consider before you do so.

Why Do They Really Need the Money?

You need to look beyond the initial reason of why a family member has asked you for money. They may be unemployed and can’t afford their bills, but that probably doesn’t give you the whole picture.

Are they actively looking for a job, or are they sitting around waiting for an opportunity to fall into their lap? Are they trying to learn new skills to bolster their resume, or perhaps start a side hustle? Or are they not taking any action to better themselves?

The same goes for family who are working, but don’t have enough left at the end of the month for groceries. Are they managing their money well, or are they being wasteful with it?

I think it makes more sense to lend to family members that are putting forth the effort needed to see results. There are times when, through no fault of our own, we get dealt a bad hand.

While you could make the argument that they should have prepared by having an emergency fund, sometimes the money saved isn’t enough to cover expenses, especially when it comes to things like hospital bills.

Will You Be Resentful?

A lot of people recommend “gifting” money as opposed to lending it. This way, you don’t have any expectations of having it paid back.

That can be a good idea in theory, but how often does it work out? You might think you’re okay with giving your money away, but you might become more judgmental toward your family member in the process. You’re going to care about how they spend the money because it’s yours.

If you see them making one financial mistake after another, you might get frustrated. This could lead you to feel like you made the wrong decision, which can then lead to regret and resentment.

Is it possible to give money with no strings attached? That’s up to you to decide.

How Will the Other Party Feel?

It’s also worth taking a look at the other side of the equation. While the family member lending the money technically has “more to lose,” that doesn’t mean emotions aren’t running high on the other side.

This doesn’t apply to everyone, but some people have to hit rock bottom, before they sacrifice their pride and ask for help. In many cases, asking for money can feel like admitting defeat and failure. It’s not a fun place to be.

Imagine for a second that you’re a parent asking for help from your child, or that you’re asking a family member that’s younger and (possibly) more successful than you for money.

It can seriously strain a relationship.

I know there are some people out there who would give you the shirt off their back, no questions asked.

Unfortunately, that’s not exactly a financially sound strategy, when considering lending money to family. You don’t want to help someone out only to need help yourself down the road!

Carefully consider the financial implications you’d be facing if you were to help a family member out. Don’t automatically say “yes” even if your heart is telling you to.

If, after evaluating your finances, you think it would be safer to say “no,” then explain to your family member how you arrived at that decision so it’s not as painful. Hopefully they’ll be understanding.

Additionally, a lot is going to depend on how much you’re being asked for. Five hundred dollars could be a drop in the bucket to some, and would set others back by a lot. Whatever you do, don’t go into debt to help others. Only look at your available (liquid) funds.

This topic has been on my mind recently as some of my family and friends have been sharing their experiences with it.

Story #1: A family member gave relatives a large lump sum because they were experiencing financial hardship.

They were behind on their mortgage and HOA fees, their credit was suffering, and they were at risk of getting kicked out of their house. They’re living on a fixed-income.

They had been trying to find jobs to no avail – they retired to a place that’s peaceful and quiet; not exactly a good city for job opportunities.

The family members who lent the money have been fine with their decision, though I can’t help but notice it might have put a strain on the relationship from the other side. I don’t see them as often and they don’t seem to communicate as much as they used to.

Story #2: My friend’s parents converted their basement into an apartment for his sibling. Unfortunately, his sibling skipped several rent payments (inherited some money, gambled it all away), and his parents decided to kick him out.

They’re still several thousand dollars in debt from the renovation and live paycheck to paycheck. The apartment is a mess and can’t be rented out.

Story #3: Another friend has been helping his parents afford to move to a home they inherited. He has footed the bill for a few costly expenses, and it’s coming straight from his savings.

He’s not currently employed, and the process is moving slowly. They’re not sure when they’ll actually be able to move in, and there are more expenses to come.

As you can tell, in each of these situations, the person’s heart was in the right place. They just wanted to help.

Unfortunately, in some scenarios, helping can be more complex than just lending money.

That’s why it’s incredibly important to consider the end results beyond the transaction. Everyone wants a win-win situation, but can one be achieved?

Take time to sit down and think things through. Discuss everything with your spouse or partner if you have joint finances. Figure out how this will affect you (emotionally and financially), the other person, your family dynamic as a whole, and what kind of precedent this might set.

There’s a lot of grey area here considering everyone’s situation is different. Do what’s best for you and your family as long as you consider your own needs first.

Have you ever mixed family and money before? How did it go? Are you against helping family monetarily? Why or why not? What do you think about giving the money as a gift vs. loaning it to family members?