Becoming a millionaire may not be easy, but it is possible. I share some of the most common traits of millionaires and what you can do to join the club. 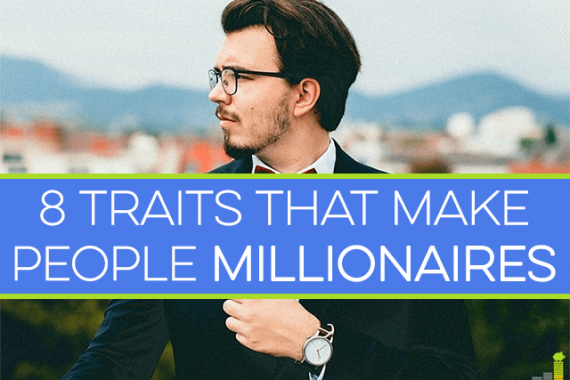 The following is a contribution from Donny at PersonalIncome.org.

Not everyone is cut out to be a millionaire, but the number of millionaires in the U.S. is at an all-time high of 9.63 million households in 2013, according to a report from Spectrum Group. While it may seem daunting for the average person to reach millionaire status, it actually only requires two main things – time and good habits.

Do you have what it takes to be a millionaire? Here we’re looking at eight traits commonly seen among the worlds’ wealthiest individuals.

They invest their money. Millionaires know that just saving their money isn’t going to get them to millionaire status. Saving doesn’t earn you any money and it doesn’t even keep up with inflation. Investing in the stock market allows your money to make you more money, which coupled with time and compounding interest, is one of the best ways to become a millionaire.

They aren’t looking to keep up with the Joneses. Simply put, millionaires live below their means. They drive older cars, live in modest houses, cook food at home and carefully monitor their spending. Millionaires are good with their money and each purchase is carefully thought out.

They work towards their goals every day. Sure, millionaires relax and have downtime, but they keep their end goals in mind and carry them with them all the time. Every decision they make takes into account their goal of being a millionaire. They stick towards their budget and have clearly defined goals when it comes to their finances.

They surround themselves with other millionaires. You are the average of the five people you hang out with, famously said by motivational speaker Jim Rohn. We are influenced by our surroundings, so find a group of individuals who challenge your thinking, live below their means and always have their eyes on the prize and you’re likely to become like them.

They’re go getters. Millionaires start their days before the sun comes up, are constantly on the lookout for new opportunities and follow their dreams. One way the average person can become a go getter is by eliminating distractions. Quit wasting time on social media and watching mindless television. Instead, formulate a plan to work for yourself and earn more money.

Most millionaires are average people who you would never guess have a net worth of one million or more. They don’t “flaunt” their money, but instead work hard, invest their money consistently and track their spending. By being focused on earning more money, taking advantage of opportunities that come your way and living below your means, you can increase your chances of becoming a millionaire.

What “millionaire” traits do you have or struggle with? What do you struggle with more – working to earn more or be mindful about your spending? What is one trait you think others give up on simply because they think it takes too much work?

Donny Gamble Jr. is founder of Personalincome.org, a published author, and investor. He graduated from The Ohio State University and has a passion for teaching others about alternative investment and retirement strategies. He is a contributor for Huffington Post & AllBusiness.com, along with other personal finance websites.