If Michael Vick Can Do It, So Can You!

Posted on January 5, 2015 by John Schmoll in Debt, Money Management 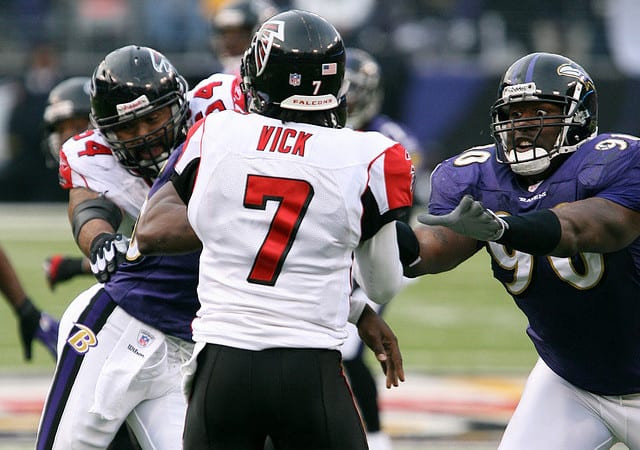 Mention the name Michael Vick and you’re bound to get a variety of responses. You have those who wish the same things on him that he was convicted of doing to defenseless animals and you have those who believe he (and everyone else for that matter) deserves a second chance. You also have those who love football so much that they look past all of it and think nothing of it.

Suffice it to say, the acts which he was tried and convicted of were vile and reprehensible at the very least. There is no debating that in my opinion, though that’s not really the point of today’s post as it’s a given in my opinion that what he did to innocent animals was very wrong!

When Michael Vick left prison at Leavenworth he was in the hole for nearly $18 Million – $17.8 Million to be exact. It boggles my mind to have that much consumer debt, but when you look at his lifestyle it’s easy to see how.

Basically, he was being the stereotypical pro athlete. You’ve likely read or heard the stories about how they might be taken advantage of by “friends” or simply spend money like it’s going out of style and just be plain stupid financially speaking. The list of NFL players who have declared bankruptcy seems endless – from Dan Marino to Vince Young to Travis Henry and many more.

This is where Michael Vick stands out in my opinion. Instead of running from his money troubles like he does defenders on the field, he has attacked debt since leaving federal prison in 2009.

While he did declare bankruptcy, Chapter 11 to be exact, he did not choose to take the easy way out. That would’ve meant he needed to declare for Chapter 7 bankruptcy that essentially allows for the slate to be wiped clean and most, if not all, debts to be forgiven.

Instead, Vick chose to repay his near $18 million debt. Recent reports show he has paid off at least $15 million of that with another million or two on the way after a real estate sale, bringing him to near debt freedom.

But, Michael Vick Had Advantages Others Don’t…

An argument I’ve heard against what Michael Vick has been able to accomplish is that he is a pro athlete and has certain advantages. There is no denying that at all in my opinion. I don’t see anyway most of us could go out and sign a $49 Million contract.

There is also disputing reports as to whether or not he was required to agree to work to pay off his debt as a part of a deal to return to the NFL. If those reports are true, then it arguably points to an advantage many of us simply would not get.

All of that aside, I’m still interested in learning how a man who was living “the life” and had it all (good and bad) pay off nearly $18 Million in debt.

The answer to that question comes down to one word…he budgeted.

That’s right; Vick and his family lived on a budget. Granted, their budget has been $300,000 per year as a part of his bankruptcy agreement.

That is a handsome salary, but you also have to take into consideration the cities he has lived since returning to the NFL – Philadelphia and New York; those aren’t exactly cheap places to live. Plus, nearly half of his income goes to taxes and lawyer fees (according to interviews I’ve heard) and he’s living to a much lower standard than he used to.

I’m not meaning to sentimentalize what Vick has gone through; his situation is very much his own doing. However, it doesn’t negate the fact that a man who was mired in debt, when given opportunity to wash his hands of it, chose instead to change his lifestyle, stick to a budget, and pay off the debt.

You Can Find Lessons Everywhere

Vick’s story interests me for two reasons. First, I’m an admitted football fan, and second, I’ve seen multiple friends say they can’t pay off debt or manage their finances better because they simply refuse to start a budget or track their expenses. Yet, the solution to their money problems seems to elude them.

I know what that feeling is like as I went through it myself when I was wallowing in credit card debt. I avoided the suggestions to start a budget. I avoided tracking my expenses. I avoided all sense of reality about my debt. And, you know what, nothing changed.

It wasn’t until I got serious about it that I was able to see a light at the end of the tunnel. Yes, it took time and yes it was tedious at times. But, if I can live by a budget and pay off debt and Michael Vick can, so can you!

Ok, what are your thoughts (and keep them clean)? Do you think Vick’s paying off of debt should be discounted because of the probable advantage he had? Why do you think many refuse to change their lifestyle even in the wake of seemingly bad situations?