Why Making More Is Better Than Spending Less

Posted on February 10, 2017 by Cat in Money Management 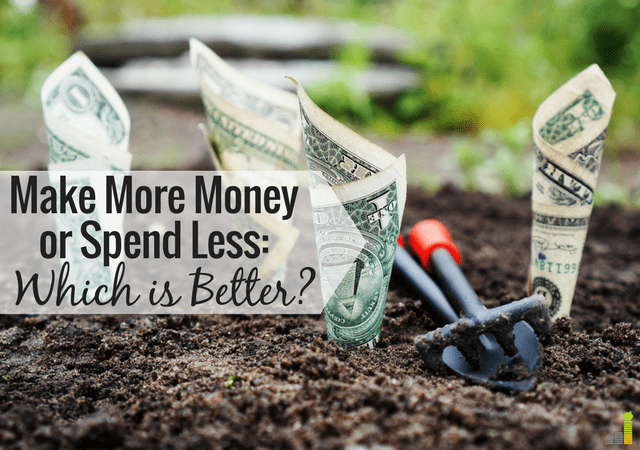 There is often a debate in the personal finance community about which is better to achieve financial goals: spending less or making more money.

Most personal finance experts will tell you that a little bit of both is the best way to achieve financial stability, and I do agree with that to a certain point. After all, even the most frugal person can do an inventory of their spending every now and then and find something else to cut out. However, in my experience making more has always been a superior path to spending less, and here’s why:

There is Only So Much You Can CuT

I acknowledge that spending less is a great way to start a debt repayment journey or to supercharge an aggressive savings goal. However, the reason I don’t like this as a long-term strategy is that there is only so much you can cut.

You can only reduce your grocery budget by so much. You can only cut cable once. Once you shred your credit cards, they’re gone (provided you don’t apply for more!)

I’ve spent the better part of my adult life shopping at thrift stores; not having a TV for several years; being a one car family and more. However, I started to make real strides with my debt, my retirement goals and even with my overall confidence once I started to make more.

None of us are bound by a boss’ gift of a five percent annual raise. There is always more money to be made; more opportunities to find; and more creative ways to hustle.

My first few days of self-employment scared the pants off of me. I was so freaked out, I could barely type. After people like John assured me that this was normal (but that I definitely had to type and get to work!) I started to embrace it. Then, one day I got a blog comment that said, “Congratulations on self-employment. Your income is now limitless.”

It made such a profound impact on me because frankly, I’d never considered it before. Self-employment scared me. All I was worried about was trying to make it on a variable income, but this commenter took it and put a positive spin on it.

It’s not just the self-employed who have limitless income potential. Everyone does. There is nothing stopping you from kicking butt at your job and getting a mid-year promotion. There’s nothing that says you can’t go and find another job where you negotiate double your pay (new research shows most college grads don’t negotiate pay at all in the beginning!)

Also, there’s no rule against dog sitting or renting out a room in your house or tutoring or anything else while you’re still working a 9-5 job. I personally have been blogging for seven years, but I’ve only been self-employed for three years. I blogged and had freelance writing clients while I taught at a university for several years before switching to full time self-employment.

There I said it. Making more is just more fun than spending less. When you have to cut out expenses, you lose out on the things you enjoy like going out to eat with friends or having cable to watch a football game.

This doesn’t mean I’m against frugality. Far from it. I live a frugal lifestyle in a 1,000 square foot house. I don’t have cable. My husband drives the same 2001 vehicle that I acquired as a teenager (somehow it continues to live despite having over 200k miles on it.)

We rarely go out to eat unless someone gifts me a Panera gift card. I love finding deals on used clothes. A few weeks ago at my husband’s white elephant holiday gift exchange at work, I was seriously baffled that no one wanted the $25 gas card that was up for grabs. You better believe we took it home.

Yet despite my propensity for frugal living, I still enjoy the pursuit of earning more and still rely on earning more to pay off my debt. There are definitely other things I could cut out of my budget, but I don’t really want to at this point. I’d rather make more.

I don’t think this is a flaw or greed or a bad thing. Rather, I’ve spent much of the past few years being married to a student and being the primary breadwinner, and I’m tired of cutting things out. I’m excited by the prospect of growing my business and making more and that’s the method I’m using right now to achieve freedom from debt and eventual financial independence.

What do you think is a better method: spending less or earning more? Why do you think we’re tempted to just cut instead of looking for ways to earn more? What is one thing that’s worth it to you to spend on instead of cutting it?