Why Leasing A Smartphone is a Dumb Move 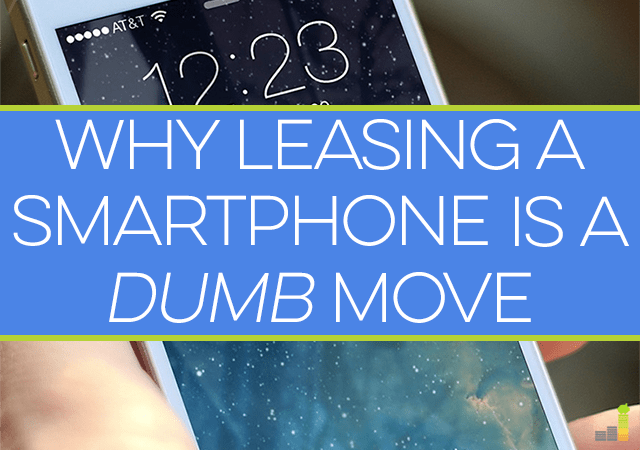 I’ve written in the past about how we used to enslave tether ourselves to Verizon each month. At nearly $170 per month in payments we were hemorrhaging cash we could’ve put to far better use.

We were like countless others who thought getting the latest iPhone (for my wife at least. I’m an Android guy) for just $199.99 was a great deal. The phone itself sells for something like $600 or $700 so that’s got to be a deal – right? In one of the many hand palm moments of my life I failed to look at the fact we were really just agreeing to finance our phones over the course of two years.

Many of the big players in the space are killing two-year contracts. That’s great to see…on one hand. On the other hand, it’s not because they are still accomplishing the same thing in a different way – through leasing. Leasing a smartphone has replaced the two-year contract in some instances and in nearly every circumstance that’s going to continue to cost you in the long run.

Why It’s A Dumb Move

Verizon, AT&T, Apple – you name it, they know what we want. They know we love technology and we want new technology yesterday. Smartphones are no different. I like me a good smartphone. Who doesn’t? A Consumer Intelligence Research Partners survey revealed that 94 million iPhones were in use in the U.S. as of March 2015, so I know I’m not alone.

I love that I can be virtually anywhere and do pretty much anything I want. To say a smartphone is a phone is a bit of an oxymoron really. Think I’m wrong? Ask yourself how much time you spend talking on said smartphone. If you’re like me, it’s very little. Rather, it’s a mini-computer in the palm of your hands. I don’t know how I’d live without one, especially with our business and the sites I run.

Anyway, the big boys count on us not doing simple math when we go to make purchasing decisions. When we give up the simple math, we guarantee ourselves being on the losing end. It’s just that simple.

That being said, let’s take a look at what leasing a smartphone from Verizon will really cost you in the long run. Let’s say you’re an iPhone fan and want the latest and greatest model. Below are the costs for Verizon’s mid-level plan:

It doesn’t stop there. What happens if you dent or lose your phone? You’re on the hook (not Verizon) to cover that cost. So, you decide you’d rather not carry that risk and want the insurance coverage. That adds another $11 to the equation, bringing you to $97.50 per month. Over the course of two years, that comes out to $2,340.

The traditional carriers also promote the “flexibility” of these plans. So, if a new iPhone is released a year after you get your phone you have the “flexibility” to upgrade to that new phone. However, you must pay off the original phone or trade it in (assuming it’s in good working order) and start another cycle of monthly payments. That doesn’t sound like flexibility to me; it sounds like a never-ending treadmill of payments…for a phone! It truly is the payment mentality at it’s finest.

There Are Other Options

There is one main reason behind the moves by the major carriers. It’s the no-contract movement started by the likes of Republic Wireless, Straight Talk and others. They have brought true flexibility, which is better for consumers.

How does a plan at Republic Wireless compare to the $2,340 at Verizon above? Quite well in my opinion. Let’s say you want the top of the line phone Republic Wireless offers – the Moto X, second generation. That runs $249 currently.

The highest plan Republic Wireless offers is 3GB, which runs $55 per month. Over the course of two years that would amount to $1,569 or a savings of $771.

That’s good, but you can do far better. If you’re on WiFi most of the time, like we are then you can get their base plan at $15 per month. They also pay you back for data you don’t use each month, which only sweetens the deal. In fact, the Republic Wireless site says an average bill for a user is just under $14 per month!

That’s not to say you have to choose Republic Wireless to save money by any means. There are many cheap cell phone plans to choose from and many of them around $30 per month. The plan we have at Cricket, for example, is $35 per month. That saves us $100 per month over what we were paying at Verizon.

The device payment plans the big carriers offer are misleading. They don’t provide flexibility. In reality, they shackle you to them in a slightly longer chain. The solution to that problem is buying your own unlocked phone to break that chain.

Admittedly, this can be expensive especially when you’re used to financing your phones. Don’t let the sticker price scare you. You will still save good money in the long-run by going this route vs. leasing a smartphone. You can buy unlocked cell phones at Amazon, Ebay and many other places. This gives you the control, not the carrier, to come and go when you want and not have to worry about making a monthly payment for a smartphone, which is true flexibility.

How much do you pay for your monthly cell bill? Why do you think so many of us fail to do simple math when thinking through things like a cell phone? Is having new technology all the time worth the added expense?