If You Were Independently Wealthy, What Would You Do For A Living?

Being independently wealthy means you can take opportunities when you want. What would you for a living if money didn't matter instead of your day job? 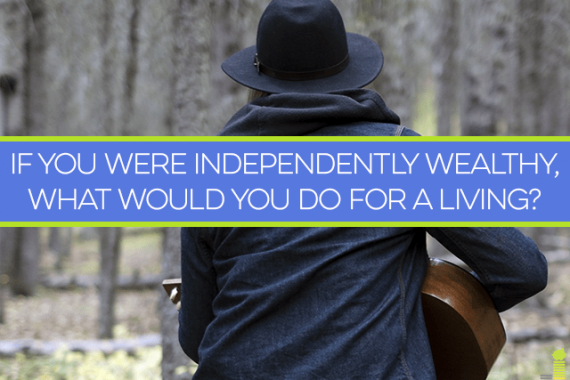 Home » Passive Income » If You Were Independently Wealthy, What Would You Do For A Living?

Having a job is a necessary evil for those of us who like to pay their bills and enjoy things in life. Well, I guess that might not be the case if your parents are living amidst piles of cash, but by and large we all need jobs of some sort.

Recently Mrs. Frugal Rules and I were discussing an acquaintance of an acquaintance. This person is well… rich. We don’t know exactly how “rich” they are but know that they’re independently wealthy.

Due to this wealth the person in question is pretty much able to follow most opportunities that come their way. While they have lost money at times, they’ve made buckets of it too. That’s not to say they’re haphazard with their investment decisions just that they can take advantage of most opportunities that come their way. Anywho, one thing led to another and before I knew it Mrs. Frugal Rules and I were in a conversation about what we might do if we were independently wealthy.

Being Independently Wealthy Shouldn’t be an Endless Vacation

I asked a question a year or so ago about whether or not you’d leave your job after winning the lottery. From what I remember about the responses they were largely mixed but definitely pointed to not just flat out quitting working altogether. For myself, I think that would get boring awfully quickly. Sure, if I suddenly fell butt backwards into a huge pile of cash, I’d travel more frequently but an endless vacation wouldn’t become the end result of having more money.

Anyway, getting back to our conversation, it was interesting to discuss what we’d do for a living. True, we might not “need” to make money if we were independently wealthy but we decided we would still like to be somewhat productive members of society. Mrs. Frugal Rules thought about writing for fun (gasp!) not money, or opening her own coffee shop or ad agency. My ideas were a little more scattered.

If I were independently wealthy, the two things I’d likely want to do would be something like being a financial advisor for middle class families or start my own microbrewery. Completely different, I know, but those were the first two things that came to my mind as they both represent interests I’d love to pursue more if I had the resources to do so.

Bringing Reality to The Dream

I know some might say that a discussion over what you’d do for a living if you were independently wealthy is a fruitless one. I would go the other direction though. I’d much rather go through life enjoying what I’m doing and that’s a big part of what I love about being self-employed.

Before I took the plunge, I was mentally trapped in the belief that there wasn’t true and real opportunity out there. Sure, I could apply for a different job or get a promotion but I was still in roles I’d ultimately want to quit. I felt like the opportunities around me were scant and fleeting.

Fast forward a few years and I see there is opportunity all around us – you just need to be on the lookout for it and be wise about what steps you take. Take my financial advisor or microbrewery dream for example. Both would either require extensive testing or a very sizable amount of money to make happen and who knows if I’d even find success.

A few years ago I’d stop at those dead ends and just throw my hands up. Now, not so much.

As Mrs. Frugal Rules and I were discussing our dreams we turned to something I’ve seen as a distinct possibility for the past few years – turning our business into a full-fledged advertising agency.

We have the know how. We’re growing a diverse client base and we’re already doing a lot of the work we’d be doing in one anyway.

This isn’t to say that there wouldn’t be risk involved in something like this, as there very much would be, but we’re seeing that by stepping out of our comfort zone to start our business, fear and trepidation aren’t the first things that come to our minds when we think of potential opportunities. Instead, we see opportunities as they are and work to make them more of a reality and less of a pie-in-the-sky kind of thing.

Keeping Your Feet on the Ground While Reaching For the Sky

At the risk of telling you to quit your job and follow your passion, I think this question is a relatively good one to think through. No, you may never be “rich”, but life is simply too short to be in something that makes you downright miserable. Yes, you obviously want to be able to pay your billsbut you also should be able to find something that’ll make you relatively happy in life. Thinking through what you would do if you didn’t need to do it to make money can shed light on what really makes you happy. You can use that insight to better direct your career aspirations and even help guide which opportunities you seek out with your current employer.

As I think about our situation I’m fairly confident that unless buckets of Benjamins start dropping on our lawn I’ll not open a microbrewery. While that dream is one I’ll have to leave for others, that doesn’t mean I have to or should stop dreaming, rather be open to other opportunities as you never know where they might pop up or where they’ll take you.

What would you do for a living if you were independently wealthy? What is one job you’d love to have? Would you ever quit a job because you were miserable and had no job as a backup? How can thinking through this question give you insight into what really makes you happy?