The 10 Habits of Frugal People

Frugal people share common traits and habits. From owning used cars to being content with what they have, frugal people seem to be smarter than the rest! 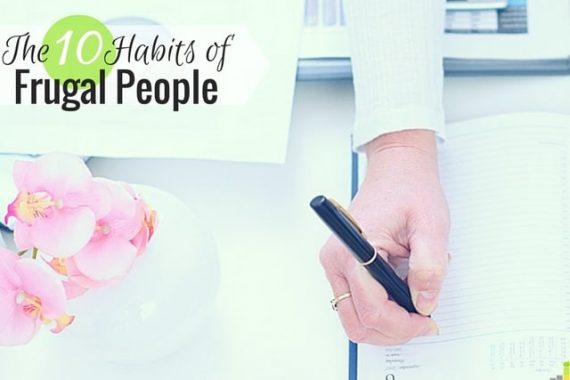 Home » Save Money » The 10 Habits of Frugal People

My financial role model is my father in law. He retired in his mid 50’s after working a government job for 20 or so years. Even more impressive, he was making around $50,000/year during his last year of work, and he had four children who were still in school!

So, how was he able to do this? Well, he’s definitely frugal but it’s so much more than that. He has a way of existing, a way of being, where he’s so happy and content with what he has that he doesn’t need to spend money to keep up with others or buy the latest, greatest gadget.

Despite being able to purchase a nice car, he’s quite content with his old truck. In fact, he “needs” his old truck so he can move things around on his property in rural Louisiana. A nice car just wouldn’t be practical.

He’s my hero in so many ways. Not only is he frugal, but he’s generous. He’s very giving to the members of his community. More than once I’ve watched him give cash to a needy family who lives down the street. Every once in a while, he’ll buy something expensive – like a tractor or nice boots – but he’s the least materialistic person I’ve ever met so he’ll never tell you he went and bought it.

1. Frugal people do not waste anything. Whether it’s a ziplock bag or an Amazon box that came in the mail, they keep it and reuse it.

2. Frugal people know the value of a dollar better than most. If they can get a better deal or a better interest rate on their savings, they will spend time shopping around.

3. Frugal people buy used. Rarely will they pay full price for anything.

4. Frugal people rarely upgrade their lives. From living in their childhood homes to driving their cars into the ground, they see no reason to inflate their lifestyles.

5. Frugal people budget and know where their money is going at all times. Depending on the generation, they might have a lifetime of receipts and calculations from the years prior.

6. Frugal people are not “cheap.” Being frugal often goes hand in hand with generosity. Because they don’t spend a lot of money on themselves, they aren’t bothered by parting with their money to help others.

7. When frugal people take vacations, they are content with less expensive hotels. They understand vacations are much more than just the place you put your head at night.

8. Frugal people rarely eat out, preferring home cooked meals above all else. They use the same pots and pans they’ve had for many, many years.

10. Frugal people couldn’t care less about the latest fads and trends. They rarely feel pressure to keep up with the Joneses and are better off for it.

As I said before, this list is not complete. But, it is my best stab at defining a way of life that can be misunderstood by those who don’t describe themselves as frugal. If you want to be frugal, this list is a great place to start!

Additional resource: If you’re looking for a simple way to stay on top of all your finances, then check out my favorite new tool – Personal Capital. Completely free, it allows you to track your spending, monitor your bank and investment accounts and watch your net worth plus many other tools.

Do you have a frugal role model in your life like I do? What did I leave off the list? What does ‘frugal’ mean to you?