When is Frugality Worth the Work?

Frugality is a great way to save money, but it can often take a lot of effort. Here’s how I balance living frugally with enjoying life with my family. 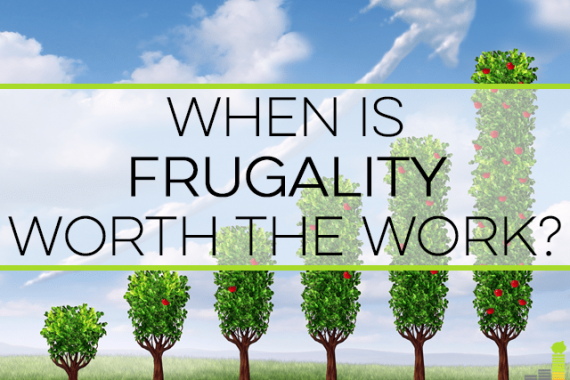 Home » Save Money » When is Frugality Worth the Work?

While I’m on vacation this week, please enjoy this contribution from my friend FemmeFrugality.

When I first had children, I quit my low-wage job to go back to school. In all honesty, there wasn’t a big gap in income between not holding a 9-5, and paying for daycare. I chose to allot more time to my studies and children rather than paying someone else to watch them while I slaved away at a job that wouldn’t help ends meet.

That did, however, mean that we were a single-income household while I furthered my education. In order to make those ends meet, we had to get pretty creative. We rolled coins. We clipped coupons. I mystery shopped, and allowed myself to be the subject of medical studies. I applied for scholarships and grants that covered more than my schooling, giving us a small infusion of cash once a semester.

We were the epitome of frugality. While things were still tight, our practices allowed us to get through my graduation without taking out student loans.

Then I returned to work. As my career picked up, things changed. I wasn’t able to spend every single day with my children, and then head out to night classes for a few hours. Our income improved by leaps and bounds, but we started noticing something. Where before we were echelons of frugality, we were now spending money on convenience.

The Danger of Convenience Based Spending

We were eating out more. We would stop at the neighborhood grocery store because it was right there, rather than driving two neighborhoods over to get better prices. Organizing things to sell on Craigslist and eBay suddenly seemed like a task too overwhelming to be worth the money, so we’d donate our old stuff to hassle-free thrift stores for zero profit.

When I made this realization, I was alarmed. What was the point of making more money if we were inflating our lifestyle? There wouldn’t be increased savings. We wouldn’t gain financial advantage.

At this point I created the Frugality Challenge, where I could compete with some of my virtual friends to get this convenience-based spending under control.

The challenge is helping. We reined in our spending though we’re still spending more than when I was a student. While we do want to improve further, we’ve reduced our stress by recognizing that frugality takes effort.

Clipping coupons takes time. So does listing products on virtual marketplaces, and evaluating a business during a mystery shop. While they’re all great ways to make or save money when you don’t have a lot else going on, they become less attractive when you have a lot of other things going on.

Some of those other things are profitable. Like my job. While clipping coupons has the potential to save me 40 percent on my grocery bill, I’d have to sacrifice a few hours of work to do so. I can make more money at my job than I could save on groceries in that timespan.

Some of those other things are not monetarily profitable. Like spending time with my kids. While I do want to give them the best life possible, saving 40 percent on groceries is in no way worth missing out on the limited time we get together as a family, or helping them meet their educational and emotional needs.

At the same time, my husband is pursuing his own education. Asking him to sort through kids’ clothing to take to the consignment shop in lieu of studying for a test is not an option. The time he puts into his degree is something that will benefit us long-term, and benefit us in a way that is worth a lot more than getting $30 on a box of gently-worn clothes. I realized it was all about finding a healthy balance.

Finding the Balance That Works for You

When I accepted that frugality was work, I started breathing a little bit easier. It isn’t a quality, or an identity. Just as I wouldn’t work 15-hour days in the name of finances, letting my family life struggle on with my money but not my time, I can’t pursue my career and simultaneously pursue every last money-saving or money-making technique I used when I was willfully unemployed.

There are some things I still do frugally. I get super cheap oil changes by taking two minutes to order a coupon to my local auto shop. We use specific gas stations to get fuel-rewards. When we travel, I use rewards points and affiliate programs to minimize our costs. These are all easy things to do that don’t tug at too much of my time.

Time is the ultimate resource we have in this life. If you have enough of it to pursue extreme frugal measures, like I did when I was in college, then by all means do. But if frugality starts limiting the time you spend with family and friends, you might need to cut yourself a break.

Make smart spending decisions, and be resourceful when the opportunity arises, but don’t allow the pursuit of frugality to rule your life.

I have plenty of work to do. I have children to raise, and a career to bolster. While I’m sure there will be future points in my life where I have the time to dedicate to the work of extreme frugality, that time is not now. And that’s okay.

What’s your take on frugality? Is it fun or work? Or both? Do you extreme coupon? What frugal habits have you dropped? Which would you like to pick back up?

Author info: Femme Frugality is a freelance personal finance writer and editor. You can check out more of her writing on her blog, where she writes about money for parents, non-traditional students, brides and philosophers.