Frugality doesn't work all the time. Saving is great but only goes so far. Here's how to balance frugal living and having what you want in life. 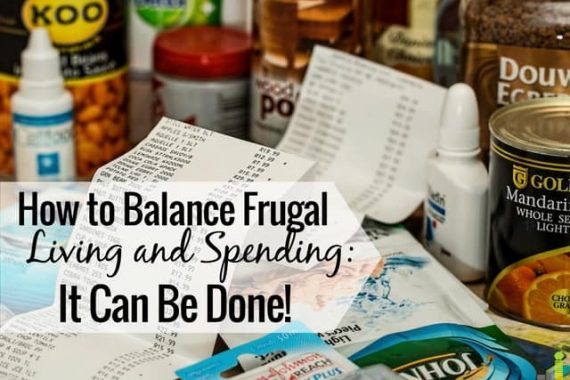 I know what you must be thinking; John has absolutely lost his mind saying that frugality doesn’t work. This is a site that’s devoted to frugal living after all so why would I make a claim that frugality really doesn’t work? Am I saying that you should throw frugality out the window and spend til you can’t spend anymore and you have no money in your bank account?

What I am saying is that frugality, just for frugality’s sake does not work. It may save money in the short run, but if it’s driven by a desire to deprive yourself, it’s going to fail at some point and betray your original intentions of saving money.

The Problem With Frugality

The big problem I have with frugality is that it’s often just not worth the time and effort. Take clipping coupons for example. We don’t actively coupon though we did early in our marriage. We were excited if we could save several dollars each trip to the grocery store.

Why wouldn’t we want to save money grocery shopping? I’m all for saving money on groceries, but the problem is the amount of time it takes to save that money.

We would easily spend 30-60 minutes each week pouring over those coupons to save a few measly bucks. Over the course of a month that would come out to maybe $10-15 saved thanks to our efforts.

Yes, we were on a tighter budget during those years but not to the extent that $10 per month would break our budget. The same could be said of other areas of spending; where we trick ourselves into thinking the time spent is worth saving pocket change.

You Won’t Become Rich By Saving

There is an ongoing debate within the personal finance space about whether it’s better to earn more or spend less. Both have their own merits. Yes, it’s good to save money when given the opportunity. That’s a no-brainer and is not up for debate.

However, there is one small problem with the spend less camp (it’s also the other major problem I have with frugality). You can only cut so far and save so much. Yes, if you’re looking for ways to pay off debt faster it pays to save as much as you can but it’s not something that’s sustainable over the long-term, and frugal fatigue may set in.

Earning more money, on the other hand, is limitless. Running your own business, for example, means you can make as much as you want – to a certain extent of course. Earning more has a direct impact on your bottom line, yet many don’t realize that – at least I know that was true of me at a time.

If your goal is to increase your bottom line, set yourself up for a better future and enjoy the kind of life you want, earning more plays a direct part in your success level. The important part to remember is you can earn more in a variety of ways.

You can find ways to make extra money, set up passive income streams or simply make more at your job and banking raises. These will all help you increase your net worth and afford you the kind of life you want in ways that saving money won’t do for you.

When Should You Be Frugal?

So, am I saying to completely throw frugality out the window? Not at all. What I am saying is that we need to decide when it pays to be frugal.

We need to ask ourselves when is it worth the time and effort to save money. That will differ for each person, depending on your particular situation, but I think there are some general ideals most can follow.

Think of it as a formula. You need to determine if the money saved is more than what you could make in the same amount of time with a similar amount of effort.

Let’s take shopping for groceries as an example. Is it worthwhile for you to save $3 per week on groceries by spending 30 minutes looking at coupons?

I’d argue that it’s not as you could spend that time making more than the $3. What if earning more isn’t a priority for you? I’d argue that you can use that 30 minutes more efficiently around the house or office than culling through coupons.

On the other hand, taking the time to look for cheaper cell phone plans or shopping for a car provide much larger savings opportunities, and therefore is a more valuable way to spend your time and effort.

These are just examples, but you get the point. You need to determine if it’s worth the time to realize those savings. If not, it’s time to move on and focus on other things.

Spend, But With Purpose

The goal with frugality, as with many other things is balance. That balance is going to be different for everyone, based on their own particular circumstances. Here’s the thing, though, I believe it’s easy to read personal finance sites and think it’s wrong to spend money on anything frivolous.

We see no-spend challenges or people living in 200 square foot houses and think we have to do the same thing. We think if we don’t that we’re destined for a life of misery and that retirement will consist of years subsisting off of government cheese because we don’t have two nickels to rub together.

That’s a bit of an extreme, but the fact remains that it’s easy to trick ourselves into thinking we shouldn’t spend money on the things we want or enjoy.

My kind of frugality is one that spends with a purpose. It balances what kind of life I want now along with the kind of life we want in the future. That doesn’t mean we live a life of deprivation now, as what’s the point?

It means we find the things we can save money on that don’t require a ton of effort so we can enjoy a few niceties now and throw everything else at the future. It’s a mindset, to borrow the Warren Buffett quote, that ‘saves first, then spends and not the other way around.’

We take what’s leftover after saving and put that towards the things we want so we can have some semblance of balance and not deprivation. Deprivation can work over the short-term if trying to reach a goal, but will not last over the long-term as it’s imbalanced.

Frugality, in my opinion, is a life that spends with purpose and seeks balance as that’ll get us much closer to where we want in life – both now and in the future. Last I checked, that’s not something saving $3 at the grocery store this week can accomplish.

Do you think frugality doesn’t work? How do you seek a balance between frugality and spending? How do you define the “worth” of savings when shopping or comparing items?