Excuses, We All Have Them!

Posted on June 6, 2014 by John Schmoll in Random musings 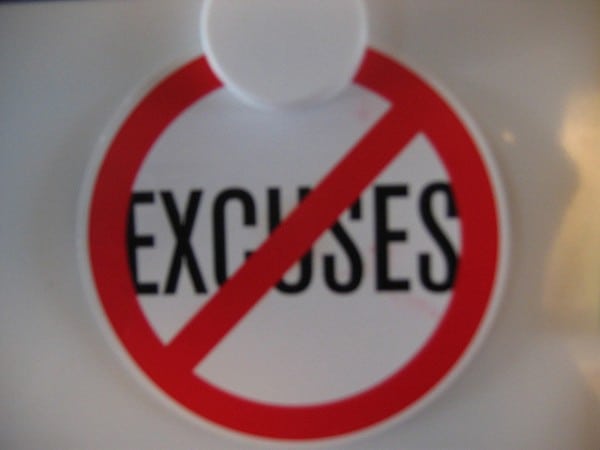 Happy Friday friends! How crazy is it that we just finished the first week of June?! It seems like yesterday it was the holidays and now we’re doing yard work and hoping the garden does well, especially as we seem to have a major rabbit infestation this year.

Anywho, as I’ve shared numerous times this year, Mrs. Frugal Rules and I are on a quest to eat healthier and get in better shape. Truth be told it has been a goal that I’ve had on my mind for a number of years. I would start and do well for a few weeks only to fall off the rails and return to my former ways. Looking back at those attempts I’m confident as to why I didn’t succeed each and every time…it was excuses plain and simple. If you read my good friend Kim’s post on Monday then you know you can’t pay off debt with excuses and the same can be said of eating healthier and losing weight.

We Love Our Excuses

As I wrote about last week, a recent article of mine for US News was picked up by Yahoo Finance. The article was on cheap ways to eat healthy. One would’ve thought that it was a political article with the way some of the commenters just lit into the premise of the article. At the heart of most of the comments was one thing – excuses.

It’s not really meant to come across as judgmental, as I have in the past and probably still make excuses for things. That said, I believe part of the reason why we don’t want to admit to our excuses is because they require us to step out of our comfort zone. They require us to be real with ourselves and our own shortcomings. In essence, we love to cling to them as opposed to take on the challenge of facing them down.

Common Excuses of Not Eating Healthy

Going back to my article, most of the excuses given were all ones I’ve used in the past and ones I’m sure you’ve heard yourself. They included: eating healthy is impossible on a budget; food prices are going up; eating healthy takes too much time; eating healthy is boring. I get all of those and have used them all myself. However, as I started to make  somewhat painful choices I’ve found that all those excuses were just myths I was holding onto. For example:

You can’t eat healthy on a budget: This is a common one we’ve all heard. Prior to us changing our eating habits we were able to stick to a grocery budget of $475 per month for a family of five. I had serious doubts at first if we’d be able to stick to that. Four full months into our change there has not been a single month we have gone over that budget. That is including quite a bit of organic fruits and vegetables as well. It’s not always easy, but with some hard choices, we’ve been able to make it possible.

Food prices are going up: This is definitely true. Beef prices alone are projected to rise by at least 7% this year alone. This does definitely make it a challenge if you choose to eat healthy. However, as said above, if you’re willing to make the hard choices it can be done.

Eating healthy takes too much time: I really don’t get this excuse at all. Yes, it’s different, but it does not have to take more time. You can cut a lot of time by pre-cutting vegetables to use for salads throughout the week or freezing them to pull out when you have need for them. Again, it comes down to choices and seeing that just because something comes in a box with instructions doesn’t mean it saves time.

Eating healthy is boring: I TOTALLY get this one. A year ago I would have sooner stuck a sharp, rusty nail into my eye than eat an apple. Now, I can’t get enough of them. The key is to give yourself variety. Include fruits and vegetables in smoothies, in different dishes, etc. Then take it one day at a time. As the saying goes, you form a new habit after 21 days and I can personally attest to that.

Turn Excuses on Their Head

I don’t want to end today’s post on a negative note. Let’s face it, we don’t like being told we’re to blame for our excuses. 🙂 I know I certainly don’t. In light of that, look at the excuses you’re making and use them as motivation to begin to work towards reaching a goal. This can include eating healthy and losing weight to things like paying off debt, to beginning to save for retirement, to so many other things.

The beauty is the sky is the limit.  Take a look at things you want to achieve but are putting off or being held back from due to excuses and choose to use that as motivation to go after them and achieve them. It likely won’t be easy, but you will be much better off, not to mention happier, by choosing to not listen to those excuses but instead make progress towards reaching your goals.

As an aside, and a great way for me to apply this I’m going to be taking Fridays off from publishing here on Frugal Rules during the summer unless I have something I can’t wait until the following Monday to say. 😉 I have a number of writing projects that I’ve been putting off and using the excuse that I have no time to get them done. Of course, I have time I just need to choose to prioritize it a little differently. So, while it feels a bit odd to take a day off from publishing during the summer, it’s done with long-term goals in mind. 🙂

What are some excuses you’re currently struggling with, but not dealing with? What are some common excuses you hear for not choosing to eat healthy? Do you have anything fun planned for the weekend?