Emotions and investing seem like they go together when they really don't. It's a long-term investment approach which serves best in growing wealth. 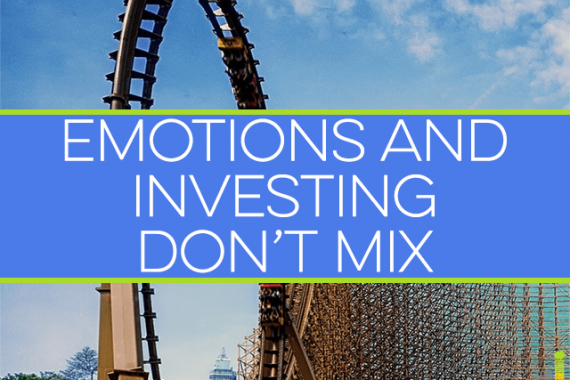 While I’m away on our cross-country trip, you get to hear from my good blogging friend Brian at Luke 1428 today.

Some things fit perfectly together. Peanut butter and jelly. Batman and Robin. Yellow and blue. Separately they have value but when they come together, they create something extraordinary.

The same cannot be said for emotions and investing in stocks. Like oil and water, they simply don’t mix. There is no place for emotion in the investing world if you want to have success.

My Emotional History With Investing

I started investing in 1996, just after my wife and I were married. It was the height of the 1990s bull market run that saw computer, technology and Internet stocks in particular soar to record highs. A company could go public one day and be at $200 a share the next without ever making a single penny in profit. (That’s a slight exaggeration but accurately defines the lunacy of the time.)

This was the investing world that greeted me in my mid-20s. It seemed like everyone was getting rich overnight. Secretaries at Microsoft were becoming millionaires. The short-term trend was the word of the day. Get in and get out as quickly and as often as possible.

I wanted a piece of that action and, like everyone else, didn’t want to wait for it.

So I started watching the financial news and making trades based on commentator suggestions. I began reading books on how to get rich by trading options. I even sent $1,000 to a friend of a venture capitalist friend, trying to get involved in a business-to-business Internet startup.

As you know, in 2000 the market finally broke. Stocks fell for two straight years, the decline sharply accelerated by the events of 9/11.

And in both states of emotion, I’d make terrible investment decisions.

Lessons on Emotions and Investing

Although my wish is to have those investing years back, going through them revealed to me that I had to find a way to keep emotion out of my investing life. So for that I am thankful for the mistakes in that they taught me how to be a better investor. My philosophy on how to invest changed and has resulted in some great successes since 2001.

Here are a few key lessons I learned during those years:

The market never goes straight up. It may seem like the good times will never end. Trust me they will. The market ebbs and flows and those who invest have to come to terms with that. It’s the market’s nature and if you are going to invest you have to be emotionally willing to take the good times along with the bad.

Refuse to be married to your investments. Investments should not be a love affair. Yet that is what happens. We fall in love with that one special stock and we end up being blinded by that love when things turn south. We think that as long as we love the stock it will love us in return. It just doesn’t work that way when it comes to investing.

I once was up almost $5,000 on an options trade that still had two months to expiration. That would have been a gazillion percent return on what I had initially invested. The way the stock had been trending it seemed the only direction was up. In my mind, clearing 20k was certainly doable. So I sat on it instead of selling and realizing that big return.

To my dismay, the stock languished for the next month. Then it started trending downward. My return began to decrease but because I was married to the investment I fooled myself into thinking it would eventually turn around. It never did and I ended up only breaking even.

Never make a trade based only on something you hear in the media. The news media specializes in whipping up emotions. Call me cynical but I think that’s part of their agenda. It drives people to tune in. (Editor’s note: Brian is right on here. They have one agenda…ratings.)

So they did to me on the morning of January 10, 2000 when I turned on the TV to learn that AOL had bought Time Warner. It was shocking…historic…groundbreaking…a sure-fire winner. Being an AOL fanboy at the time (it’s easy to forget the popularity of AOL in the mid-1990s), I was excited for this. Within 30 minutes I had made a trade, hoping to profit on an upside movement in AOL stock.

That upside never materialized. The merger would be called – just a year later – “the biggest mistake in corporate history” by Time Warner chief Jeff Bewkes.

And of course I lost money on it.

Single stock investing is emotional, and even risky business. See above point.

I’m not saying there can never be a place for individual stock investing. It simply takes more wisdom and nerves of steal than I had at the time. I would never counsel a beginning investor to start with individual stocks. Learn how to invest in index and mutual funds instead. There will be enough emotion to handle just doing that.

Get away from short-term thinking. A longer-term strategy dampens the emotion. When I realized this and adjusted my strategy, my investments began to consistently grow. Thinking 10, 20 or 30 years down the road helps put the mind at ease during any given crisis. You will end up making wiser and more profitable investing decisions (see below).

The Benefits of Mastering Your Emotions

If you can keep your emotions in check two things will happen that will vastly improve your ability to succeed at investing.

First, you will end up investing more money when the market is in pain.

Everyone was panicking during those months and shortly thereafter. Emotions make you do that. So investors sold, just “to get out” at any cost for fear of losing everything.

Those who kept their emotions in check and put money into the market during those bleak times are sitting on a gold mine of returns today as the DJIA now sits at nearly 17,000.

Secondly, controlling your emotions will also keep you from cashing in when times are good.

The DJIA and S&P have been making new all-time highs this entire year. Analysts are beginning to warn about the next 20-30% drop in stocks. “Sell now” they say, “and wait for a reversal to purchase stocks at lower prices.”

This once again promotes fear and is a foolish proposition for the long-term investor. The market being at an all-time high really doesn’t matter to me. My risk in selling is losing out on the continued upward movement in stock prices. If prices do fall it doesn’t matter. As I’ve already mentioned, with my emotions in check I will continue to invest when times are bad.

My encouragement today is to keep emotions out of your investing life. I’m not saying it will be an easy task. When the market was in free fall in late 2008 I was as nervous as the next guy. But I didn’t let it impact my investing strategy.

The mind and will must be stronger than the emotions or you will end up making silly mistakes and losing big time returns.

What emotional investing mistakes have you made? Have you ever fallen in love with an investment only to have it bite you? Does the media have an influence on how you invest? Does anyone still use AOL?

About the author: Brian Fourman is a former private school personal finance and Bible teacher now turned stay at home dad and blogger. His hobbies include rental real estate, running, cooking and sports. In his down time, he loves hanging out with his four kids and hearing his wife talk about all the cool things CPAs do at work. You can check him out providing encouragement and inspiration on his blog at Luke1428.com or by connecting with him on Facebook, and Twitter.