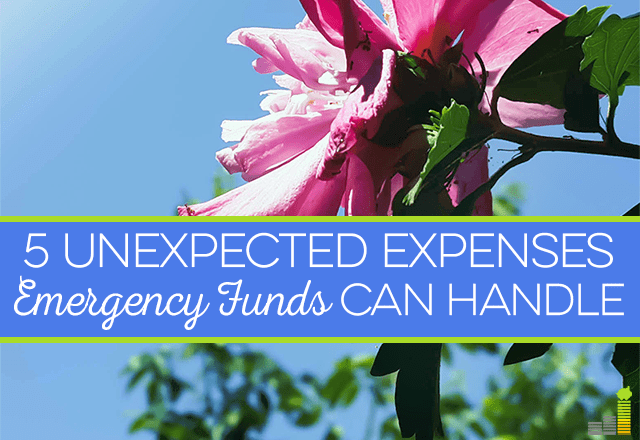 An emergency fund is a tool that’s often shoved down our throats in the personal finance world, and for good reason. You never know when something crazy might happen!

Case in point – last week, our lovely Tonya wrote about how her phone got run over on a busy road during a trip she took.

Do any of us expect our gadgets to break like that while on vacation? No! We hope to return with everything in one piece.

Just in case you haven’t been convinced of how useful emergency funds are, I figured I would go over five unexpected expenses emergency funds can handle that are a little out of the norm.

The first story comes from my grandma, who lives in a 55+ gated community. She’s been there for at least 20 years now.

A few months ago, the entire community was informed they had to fork over $6,000 for road maintenance (they’re in NY, where plows have destroyed streets). Oh, and if they didn’t pay, a lien would be put against their homes.

These are people living on a fixed income. Apparently, they just had to magically come up with $6,000 to give to the Homeowners Association, and only with a couple month’s notice (right after the holidays, to boot).

My grandma was telling me many residents had to turn to personal loans. Thankfully, there’s a credit union a few blocks away from the community that heard about the issue, and offered a less stringent approval process for them.

I don’t even want to think about how difficult it’s going to be for them to pay it back.

Still, how crazy is that? These residents had no choice – I believe several looked into hiring a lawyer to get the decision overturned, but it would cost them either way.

Money is already tight for seniors, and it’s difficult to maintain an emergency fund on a fixed income.

It just goes to show you that no one is safe, and emergency funds never go out of style, no matter how old you are!

I still get grossed out thinking about this one. Years ago, when I was living with my parents, our house got invaded by greedy little termites. There were quite a few times we had to call exterminators over to get rid of them.

To ensure they wouldn’t come back, the exterminator suggested we sign a yearly contract.

I can hear you all groan now. Signing up for services like that isn’t usually a good idea, right?

Right. I came home from class one day and my dad was afraid to talk about it. Apparently, he agreed to sign the contract, and somehow, we were on the hook for $800.

That might seem like a small amount to you, but at the time, my dad was unemployed, and money was very tight. My mom was not happy when she found out.

I know I probably don’t need to say it, but it always pays to read the fine print. Don’t ever be afraid to ask questions, even if you have to swallow a bit of your pride. You should always know what you’re agreeing to and what you’re paying for.

Or any healthcare emergency, really. I happened to be uninsured when my wisdom tooth decided to start causing me intense pain one day (teeth aren’t considerate), and even though I tried to wait it out, I had reached my max level of pain tolerance.

I called around for a few quotes, and found out it should be less than $500. That was a relief.

When I got there, the dentist looked at my tooth and said if I could handle getting just the local anesthetic, it would be a lot less money.

Admittedly, that was one of the scarier moments of my life. I’m not sure how I didn’t have a panic attack, but I survived, and came out with a bill that was around $275.

Needless to say, while I wasn’t happy to be in pain, I was very glad I had the money saved to cover such an emergency. There was no way I was dealing with that pain day in and day out. Your health shouldn’t have to suffer because you don’t have enough savings to cover it. (Or you might want to consider getting insurance!)

When I say disasters, I mean disaster (for the most part). This isn’t a simple repair job I’m talking about.

Well, it starts off with a repair. Several years ago, my ex’s car was in the shop, and after $800 worth of repairs, it was finally good to go.

This happened to coincide with visiting his family for Easter. They only lived a few hours away, so we thought nothing of it. But of course…we got into a car accident on the way back home.

A huge truck rear-ended us, and the car ended up being totaled. We were brought to a hospital via ambulance, I had to call my parents to come pick us up, and then we had to drive all the way back home.

And…drive all the way back the next day! The car had been towed, so we had to pay to get it out of the lot. I also didn’t mention all the tolls we had to pay between all the trips we took.

Then, of course, my ex had to look for a new car. Thankfully, the insurance payout was decent, but he had an older car to begin with, so there wasn’t much to work with.

I had never seen dollar signs total up so fast before. I couldn’t get over the fact he had spent $800 getting it repaired just the day before. 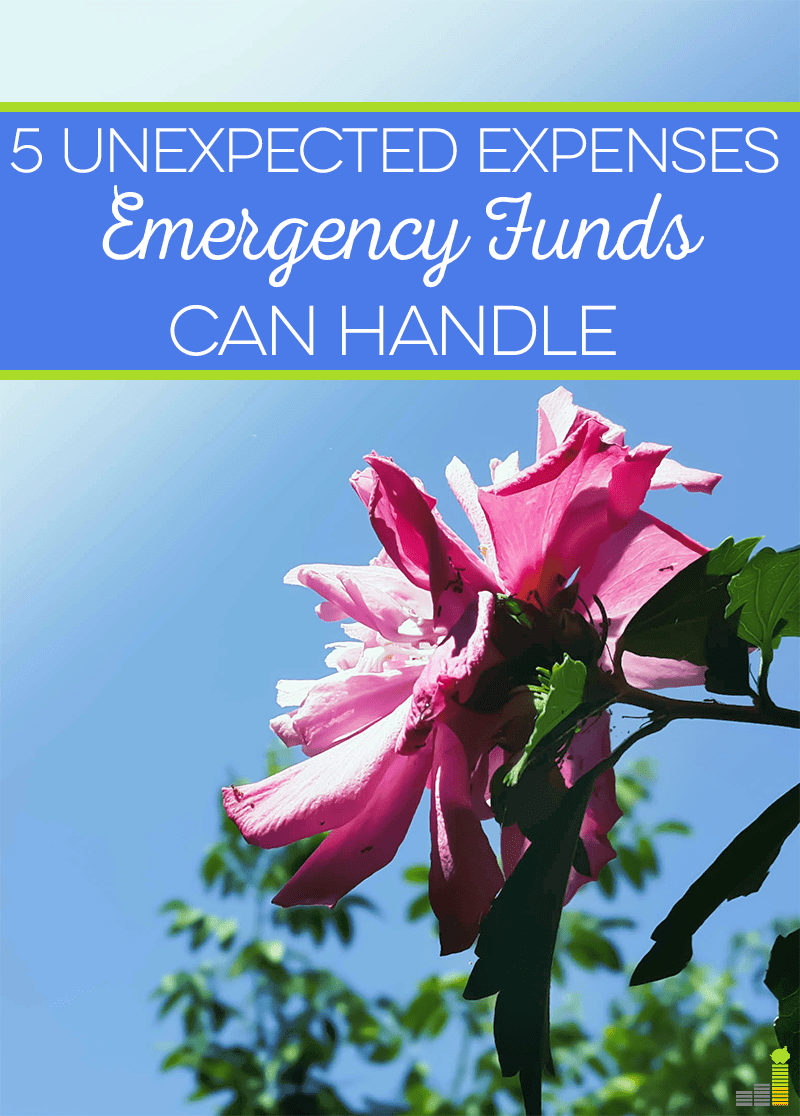 5) Repairs After a Break-In

This one involves a car, too, but not in the typical way.

Last year, my car was randomly broken into, or the window spontaneously blew out. We had no proof either way – all we were left with was glass shards on the ground and in my car.

As my car is older, I didn’t have glass coverage on it. I never really thought something like that would happen (who does?).

I called around for quotes, and one glass repair shop was willing to replace the window for $160. Whew. That was less expensive than I thought it would be, but it still stung nonetheless.

I mean, who really expects to walk out to their driver side window being smashed?

Well, after posting about the incident on my own blog, several people commented it had happened to them, or someone they knew. I was astounded.

It Pays to Be Prepared

If these five things don’t show you how important it is to save for the unexpected, I’m not sure what will. Absolutely anything can happen at any time (usually the worst time). Murphy’s Law generally prevails, and it’s a good idea not to challenge it.

What’s the craziest thing you’ve had to use your emergency fund for? Have you ever thought emergency funds were overrated? When have you agreed to something without reading the fine print? Did it come back to bite you in the butt?