Should You Drive Your Car Until It Dies?

Should you drive your car until it dies? This is a tough question to answer, especially when trying to balance competing desires for frugality and safety. 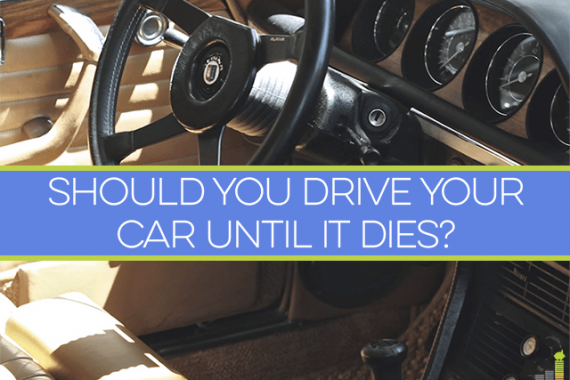 Home » Save Money » Should You Drive Your Car Until It Dies?

Many people in the frugal blogging community, myself included, are fans of driving cars until they die; that is, until they have so many miles on them and are worth so little that it’s finally time to let them go. I am not in favor of replacing my cars when they are just a few years old nor am I in the habit of taking out car loans. However, that doesn’t mean I don’t have to make a tough decision every now and then.

For those of you who have a tough decision of your own to make about whether or not you will keep your old clunker, perhaps my personal story will help you make a decision about how long you want to drive your car.

I currently own two vehicles. They are both really old Volvos and they are both paid for. One is an old Volvo sedan that I’ve been driving for 12 years and the other is an old Volvo SUV that I bought from a family member in cash when I found out I was having twins.

I’ve never had a car payment because of this, and I really don’t want one. I rarely drive or go anywhere, because I am a little blogging hermit with toddler twins. However, that doesn’t mean I want to go without a vehicle entirely.

So, imagine my frustration when my SUV completely broke down and left us stranded on the side of the road an hour away from our home. Luckily, we were going to a friend’s engagement party and one of our best friends who was also attending the same party was able to meet us, put the kids’ carseats in his car and take us to the party while he and my husband arranged for the tow truck, etc.

The car was in bad shape. We feared it was the transmission or the steering column because even in park the car was moving forward on its own. All of that sounded like tons of money to fix, and a car that is only worth about $3,000.00 to begin with didn’t seem worth it. Needless to say, we weren’t sure what to do.

On one hand, if we wanted to sell the car, we’d still have to fix it. After all, it wouldn’t drive at all and it was stuck at a repair shop. So, if the repairs were $1,000 or more, we’d have to fix it and then hope to get a higher price than that in a private sale.

Then we’d have to decide how much of our liquid cash we’d want to use to get another car, since I really, really enjoy not having a car payment. All in all, it seemed like either choice would be a pain. Then, we looked at cars online, and all I could afford it seemed were older cars like the one I already had which are obviously more prone to having issues.

Luckily, we found out a few days later that it was actually the front axles that died, not the transmission. The mechanic was a very sweet and honest small town mechanic who was willing to let us order our own parts online so we could get them for less.

So, we shipped new front axles to his shop and waited almost an entire week for the car to be ready. On our way to pick up the car, we went to the ATM and got out $1,000 in cash hoping that we could haggle with him if we offered a cash payment.

And then, an awesome thing happened. The repairs only cost $125! That was a surprise and something that would have never happened at the Volvo dealership that’s for sure. So, the repairs plus the parts were about $400, and for all those reasons we decided to keep our SUV and let it live in our driveway for a little bit longer.

Drive Your Car Until It Dies

It’s always really hard to decide when to let a car go, especially an SUV like mine that has 230,000 miles on it. At the end of the day, as much as I would love a newer, more reliable car, I reminded myself that I am, as I said above, a blogger hermit who works from home and never leaves the house.

I’m more likely to walk into town with my stroller than to actually pack the car and go somewhere. When my car was gone for an entire week, I hardly noticed its absence. Because of that and the high cost for a new one, I decided to just work with what I have.

At some point, I know we’re going to have to buy a new car. As I said one car is 12 years old, and the SUV is 9 years old, and both are around the 200,000 mile mark. But, there’s no rush. I’m glad we thought about the process and went through what it would cost to buy a new car so we can start saving for the future when it actually dies for good.

If you drive an old car, what keeps you driving it? If you’re planning to drive it until it dies, how will you know when it’s time to let it go? What hard repair decisions have you had to make about one of your cars?