5 Things I Don’t Miss About Working in an Office

Posted on July 7, 2014 by John Schmoll in Self Employment, Taking the Plunge 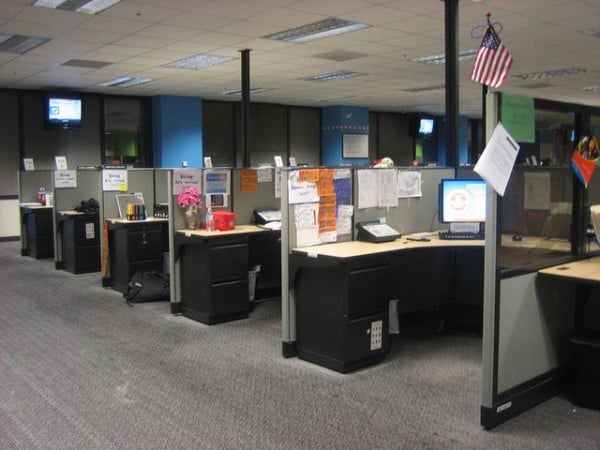 As many of my readers know, I work from home. In fact, I just hit my 2 Year Quitiversary a few weeks ago and couldn’t be happier. Running your own business doesn’t always involve chasing after rainbows and puppies, but I am pretty darn happy these days.

One of the things I’m happiest about is that I’m no longer confined to a fabric prison…err…cubicle. I’ve seen a lot of things in my life and one of the last things I would wish on a person is having to spend decades under the glow of industrial lighting in a cubicle. People just aren’t meant to live that way.

Of course, I could be just a bit biased. I mean, after all, the cube next to me housed someone that literally liked to groom himself there at his desk and while in meetings. It wasn’t pretty, to say the least.

Anyway, I read this interesting article over at Contently a few weeks back by a fellow freelancer who shared some insight as to things she missed about not working in an office. Seeing as I’m generally cynical by nature, I thought I’d share some of the things that I don’t miss about working in an office. Before I get started, I would also like to give a hat tip to my friend Michelle over at Making Sense of Cents who was thinking along very similar lines in her post last week – What I Don’t Miss About My Day Job.

What I Don’t Miss About Working in an Office

While no job is perfect, and I have definitely found that to be the case in working for myself, there are just some things I don’t miss from the office. Such as:

Ok, I admit it, this is the easy one. In my former job I had a commute of 20-30 minutes per day. This isn’t necessarily bad, per se, but that was nearly an hour of my day spent on driving. That alone meant, all totaled, that we had a gas budget of roughly $300 per month. Now that my commute is 20 seconds…if I’m crawling, our gas budget has been cut by 2/3 per month. That’s real money that can be used elsewhere.

In every job I’ve ever had, there has been some sort of political environment. It’s inevitable, on many levels, in my opinion and I always hated it. I’m much more of a ‘just get your work done’ type of person. I don’t have to deal with that much now that we run our own business. Yes, many clients have that going on but since we’re physically separated from them we really don’t feel it much.

What is it about offices that cause people to bring in all sorts of junk food? I know sitting on your butt all day and some high caloric food is a perfect combination, but I don’t miss it. Now that I work from home I can choose what food is around me and now that we’ve made some important health decisions I’m surrounded by plenty of healthy options.

This one really struck out to me in the Contently article. We hear a lot about work life balance, and rightfully so. However, I don’t know that I believe that there is some mystical work life balance out there that means you’re perfectly balanced from that aspect. Yes, you can have extremes and it ebbs and flows but that’s about it. When I was working in an office, my day didn’t end at 5:00 pm, or whenever I quit for the day. Often days I was bringing work home either in physical or mental forms and it still impacted my life at home. I know many will say that you can’t separate work/life when you work from home, and they’re right to a certain extent but at least I only have myself to blame in those instances.

This sort of fits with the office politics above. That said, I do not miss meetings at all. If you work in an office, then you know what I mean. Seriously, we had meetings about meetings. Really? Is there nothing better to do than to have a meeting to discuss meetings? As my dear wife will tell you the thing that drives me nearly as nuts as wasting money is wasting time. Many meetings were simply that, at least in my case. We still have meetings now, but it’s usually either to win a new client or go over something our client wants us to work on for them. They’re much less frequent and it usually means money is coming at the end of it so I’ll gladly take those kind of meetings. 🙂

If you work in an office, what drives you nuts about working there? What do you hate most about being in a cubicle?