What Do You Really Deserve in Life?

What do you deserve in life? We tell ourselves we deserve something when it hinders our goals. Here's a way to have what you want and still have freedom. 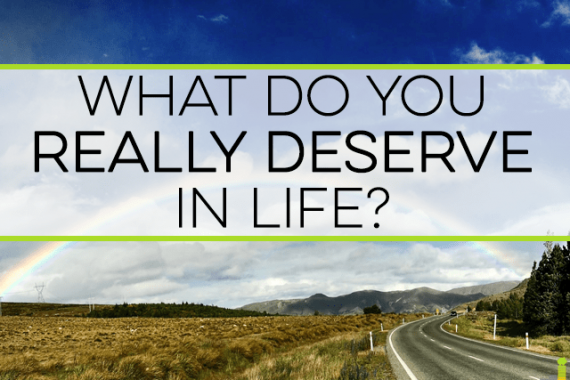 Home » Save Money » What Do You Really Deserve in Life?

How many times have you told yourself you deserve any one of the following:

I’m willing to bet we’ve all been guilty of at least one at some point in our lives.

After a long day/week/month/eternity, we feel like we deserve something nice as a pick-me-up. We worked hard to get where we are right now – can’t we have a break!?

In fact, this happened to my friend last weekend. He had just endured two brutal days of work. His co-workers decided to call out, and he started the week off by getting called in to shovel out tons of snow at his place of employment. Tons of fun, right?

Guess what he mentioned as he was leaving work Friday… “I think I fully earned this weekend of beer after this work week from hell.”

What Do You Really Deserve?

Of course, I replied by telling him that’s a dangerous mindset to be in, but in my friend’s case, he had already budgeted for it.

Most people don’t get that far. They simply default to thinking they deserve whatever is going to cheer them up at that particular moment.

I would never argue that we don’t deserve amazing things, especially after putting in hours upon hours at work, but I would urge you to think a bit deeper about that statement. Especially if you’re in debt.

Do you have trouble keeping your spending in check? Is this entitlement mentality to blame? Try re-framing your thoughts.

Emotional spending can be difficult to ward off (especially as financial issues are rarely logical), but the temporary happiness you get from these purchases isn’t going to help improve your situation. You need to think big picture.

What Do You Want in Life?

The easiest way I escape the “I deserve it” mentality is by pitting my long-term goals against my short-term wants. The battle in my mind is usually short-lived.

Let’s say I’m at Target (which is dangerous) and I happen to see a really cute top. Normally, thinking about trying on clothes is enough to send me on my way (I really dislike shopping), but we’ll assume I’ve been feeling like I need a makeover in the clothes department.

As I look at the price tag, I remind myself of what’s really going on here. I’m temporarily unhappy with the state of my closet, and I think this one shirt is going to magically solve that.

Yet…I’ve got a larger goal to work toward: getting rid of my student loan debt. Picture a bubble above my head: new clothes vs. debt freedom. Hmm…which is better?

Nine times out of 10 I choose the responsible route and go with debt freedom. I want nothing more than having my balance gone. In this case, it’s emotional on both ends, but debt freedom is much more enticing to me.

It means I can start saving more money toward retirement (I value security), it means I can scale back on work (I value freedom), and it ultimately means I have more time to spend on the things that bring me lasting happiness.

Maybe that didn’t resonate with you. Perhaps instant gratification is a beast you’re not quite ready to slay.

Instead, try and think about it this way: you’re most likely trading time for money right now. You go to work for a number of hours each week to earn a paycheck to cover your living expenses.

So you go to work, go home wanting a vacation and spend to make the situation sting a bit less. And you repeat the cycle again and again.

You see where I’m going with this, right? You’re essentially a hamster running on an endless wheel. Work -> spend to feel better -> work because you need the money -> spend because you want a bit of happiness.

Why not work toward improving your finances, so you can say goodbye to your job, or whatever is causing your unhappiness?

By giving into “I deserve it,” you’re sentencing yourself to more years in “prison” and delaying your financial freedom.

We regularly mention having a strong “why” on the site, and that’s because it’s a force to be reckoned with when you define it properly.

Your why is your weapon against emotional spending. When you know your why you will know what to do when faced with temptation.

Figuring out your financial situation is like piecing together a puzzle, or charting a road trip. You need to have something guiding you, whether it be the cover of the box, or a map/GPS.

Your why is that guide. It pushes you forward through the tough times and past all the distractions.

For most of us, our end goal is freedom. We’re getting our finances in shape to set ourselves up for future success. We want to retire without worry, and on time, so that we can enjoy the rest of our years how we see fit.

I’ve talked about finding the balance between spending and saving before, and it’s tough to find, but that doesn’t mean you can’t work toward it.

Going back to the first part of this post, I said I wouldn’t argue that we don’t deserve amazing things, but that amazing thing should be meaningful to you.

Freedom should be one of those things, but while we’re working our way toward it, we do need to celebrate our progress.

To that end, I’m a fan of factoring fun into your spending plan. Either set aside a certain amount each month to spend on a small splurge when you need it, or create a list of free things you enjoy that will make you happy. Or both!

Depriving yourself is one of the quickest ways to fail on a financial journey, but planned purchases are much more conducive to your end goal of freedom than emotional purchases! It all comes down to spending on your values and being mindful of where your money is going.

To that end, if figuring out where your money is going seems like an arduously overwhelming task, consider using a free online tool like Personal Capital to easily track your spending and saving efforts.

If your answer to “What do you deserve?” was initially something on the superficial side, I hope you’ve begun to see that there’s more to life than stringing together a bunch of purchases that provide quick hits of happiness. Think big picture and long-term, and don’t forget to enjoy the present as you work your way there.

What do you truly feel you deserve in life? What’s your end goal? What steps are you taking to get there? How do you manage the “I deserve it!” feeling?