Debt is only a temporary fix when you don't have the cash to pay. Taking on more debt isn't the solution to your financial problems - here's what can help. 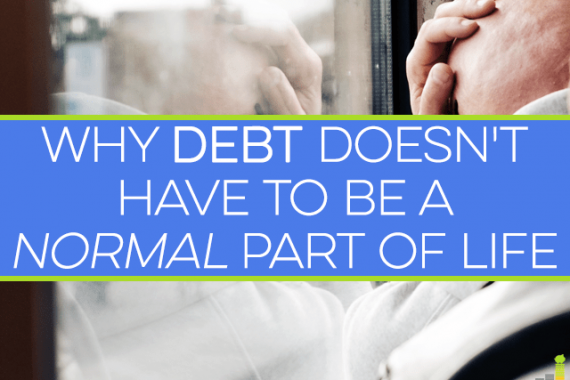 A lot of people find themselves trapped in debt because they can’t save. As a result, they don’t think there’s a way out. Some people have simply accepted the “fact” that debt is normal. Worse, they’re already in debt, and don’t think adding onto it makes a difference.

Most of us know debt can create a vicious cycle that’s difficult to break out of. It’s difficult because it takes a strong person to overcome the mentality that most people with debt have. When you’re conditioned to think it’s a normal part of your life, or when you’ve never questioned buying on credit, you have to do a 180 and change your thoughts and your habits.

It’s not impossible, though. You can turn your life around, but taking on more debt isn’t the solution. Yes, payday loans and personal loans exist, and for some, it’s the only way they can survive the next week. But the first step in the process is simply realizing there are other options, and that debt is only a temporary solution. To break free from debt, you have to focus on the long-term.

Debt is a Problem

Let’s work off the premise that debt is a problem. You shouldn’t think of it as normal. If you do, then you need to come to terms with the fact there are plenty of people who aren’t living paycheck-to-paycheck or relying on credit for everyday purchases.

A few years ago, my fiance and I were looking to move into an apartment together. His mom happened to have a basement apartment that was originally built for his brother. When she asked us if we could afford to pay rent, she was skeptical. She honestly could not believe we had anything saved up.

I didn’t know how to respond. Just because she has a rough time managing her finances doesn’t mean everyone else does! It scares me that this is the mentality of most Americans. My parents had the same views for most of my life; only within the past few years have they realized there’s a better way to live.

As long as you’re earning a decent salary and have enough to buy the basic necessities, it’s completely possible to save money and not have to rely on credit.

Why Debt Isn’t a Solution

Debt isn’t a solution when it comes to getting your finances in order. It might seem like a solution because it buys you something you need (or want) and otherwise wouldn’t be able to afford, but it’s a band-aid.

Say you’re living paycheck-to-paycheck with $100 in savings. You’re already in consumer debt – you have a credit card balance or a personal loan.

One day, your HVAC system dies. It’s going to cost $1,000+ to fix. In most cases, you’re going to need heat or air conditioning in your house to function properly, so you charge it without thinking twice. It’s necessary, and it needs to be fixed immediately.

A few months later, your water heater dies. Then you find out you need to replace the gutters on your house. Or your car needs new tires.

It’s one thing after another. You keep racking up credit card debt because you’re not making saving a priority. You don’t have the funds to pay down your balances beyond the minimum, and interest is accruing rapidly. You’re now stuck under a pile of debt.

For some reason, people never stop to calculate exactly what their debt is costing them. Interest is a nasty thing, especially on credit cards, with the average APR being around 15%.

Here’s a simple example: you charge $500 to your card, with a 15% APR. You plan on paying the minimum of $25 per month. If all goes according to plan, it’ll take two years to pay that $500 off. In that time, $78.95 in interest will have accrued. Instead of paying $500 for something, you’ll have paid almost $580. Accepting a payment mentality – the idea that you’ll always have monthly payments and that’s okay – costs you more than living by a savings mentality.

It only gets worse the more you add on, and we’re not even mentioning the mental cost. Some people don’t question their debt, but others feel the strain as they’re left wondering how they’ll afford to make their monthly payments. That’s not a place you want to be in.

Hopefully you’re beginning to see that adding more debt to your plate won’t help you in the long run.

What Can You Do?

What will help? The things we talk about here all the time – making a budget, creating an emergency fund, planning for “unexpected” expenses, cutting your expenses, spending in line with your values, earning more, and prioritizing paying off your debt.

You need a stable financial foundation. Debt causes cracks in that foundation, and eventually it will crumble under the pressure.

In our example above, if you had done everything I just mentioned, you would have been fine. Your emergency fund would have come in handy for all of those expenses. You would have cut back or worked on increasing your earnings to replenish your emergency fund. You also might have already saved money for those repairs as you anticipated the HVAC unit and tires on your car needing to be replaced.

I understand that not everyone is privileged enough to earn a good salary (or anything at all), but if you’re reading this, chances are you can at least afford to pay for internet access.

Start taking steps to attack your debt and get the rest of your financial house in order so that when disaster strikes, you’re prepared enough to turn away credit cards and loans. There’s nothing stopping you from creating a better financial life – don’t let debt control you.

Was there a point in your life where you thought debt was normal? Did you ever think twice about charging something to a card, or applying for a loan? What steps did you take to work your way toward debt freedom? What are other solutions people can use instead of debt?