Why You Shouldn’t Let Debt Hold You Back

Have you let debt hold you back? Are you tired of making sacrifices for it? Here's why you should put your happiness first and still kill your debt. 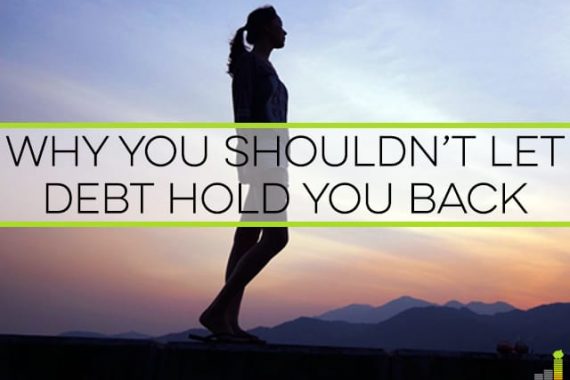 I’m sad to say this is my last post for Frugal Rules. I’ve enjoyed writing for all of you and am thankful John gave me this opportunity, but as my business has expanded, I need to move my time and energy to new opportunities. I thought it fitting to make my last post a bit of a reflection on why you shouldn’t let debt hold you back.

This is something I’ve personally struggled with for years, ever since I graduated with student loan debt. It’s been a cloud that has followed me throughout my financial journey thus far.

Anytime I think of purchasing something – whether it’s a necessity or a treat – debt has been a thorn in my side. I’m constantly reminded that I’m not free. I know a portion of any money that comes in is automatically earmarked for paying off debt.

While I’ve paid extra on my student loans more months than I care to count, and while I’m fairly responsible with my money, there’s still a part of me that wishes things were different.

I Let Debt Hold Me Back Too Many Times

Debt has held me back from a lot. First and foremost, I haven’t done nearly as much traveling as I would like because of it. When I do manage to go on vacation, I scrimp in so many areas, it’s barely worthwhile. I just can’t justify going overseas or planning something that’s going to cost me over $1,000.

I’ve also been of the opinion that marriage can wait until all my student loans are gone. I wouldn’t want to start a new chapter of my life with that all-too-familiar cloud hanging over me.

I haven’t become a homeowner for many reasons – debt being the least of them – but I’m 100% certain I wouldn’t want to sign up for a mortgage with my student loan debt still in existence.

On the same subject, I’ve been unhappy in the city I relocated to a few years ago. Moving has been on my mind for the better part of a year, but I was too scared to pull the trigger. After all, it’s not a small expense, and taking such a huge risk while being in debt seemed like a move in the opposite direction of where I should be going.

Debt was also hanging over my shoulder the entire time I was trying to make a go of freelancing. I kept doubting myself and thinking I should go back to the 9-5 grind for a steady paycheck because I felt incredibly guilty for paying the minimums on my loans at the time.

Not that it’s a horrible thing, but being in debt has caused me to become even more adverse to debt than I was before. I recently had a car repair that totaled almost $1,500, and more work will need to be done in the future. The idea of buying a “new” car briefly floated through my head, but the thought of signing for a loan is completely undesirable to me.

Debt has held me back in little ways, too. I’ve said “no” to hanging out with friends far too many times than I want to admit because I felt guilty for spending my money on anything fun. I felt like I didn’t deserve it – not until I was free.

Life Isn’t Going to Wait for You

All of these denials slowly added up and culminated in me slowing down on my debt payoff. I know there are a lot of people who disagree with that. “Debt is an emergency and should come first!” is advice that’s often repeated in the personal finance community.

Well, I put debt (and saving) first a lot, and I’m not so sure it was effective. Sure, my loan balance went down, but so did my morale. While I’m still determined to pay my student loans off this year, I’m no longer willing to do so at the expense of so many experiences.

Last year, I realized I had had enough of saying “no” to myself. I could continue making progress on my loans while living in harmony with my values. These values happen to include traveling to see family and friends and experiencing new things.

It might sound like a cop-out, but life isn’t going to wait around until you finish paying off your debt. It’s going to happen regardless. The harsh reality is that there’s no “fear” of missing out; you are missing out, one way or another. At least, that’s how I felt.

Only You Know What’s Right for You

I realize this post is full of cliches, but they’re all true. I’ve heard many people say that they didn’t want to let debt get in the way of getting married (or even dating), starting a family, buying a house, traveling and generally living life. I’ve seen just as many bulldoze their way through debt so they could start living the life they want to live sooner.

Neither method is right or wrong. I’ve tried both, and I’ve found that although it’s difficult to find balance, the middle-of-the-road approach is right for me. I can’t go all-in for months on end, and I would never advise someone to abandon their debt repayment completely in favor of YOLO or anything like that.

At the end of the day, it comes down to this: what’s keeping you up at night? Is it the thought of wishing you could move on to the next stage of your life? Or is it the thought of your debt accumulating all that lovely interest?

Sometimes, a little soul-searching is needed to find your answer. Do you have any deep regrets about things you’ve put on the backburner due to debt? Or are you okay with the sacrifices that have been required of you?

What’s Going to Make You Happy?

Ultimately, I don’t believe that you need to sacrifice your happiness to debt. Yes, in certain situations, it is an emergency, and you should be conscious of your financial moves in light of it. But that doesn’t mean living like a hermit and depriving yourself of all the good things in the world.

You can be financially responsible with your money while still living your life. You may need to modify a few things here or there, but you shouldn’t sacrifice your biggest dreams, especially if it might take you years to pay off your debt.

You can’t let your money control you, especially not out of fear. That doesn’t make for a happy existence, and I learned that the hard way.

I’m glad that I didn’t let debt hold me back from everything I wanted. I persisted with freelancing and I’m earning more than I did at my previous day job, with even more opportunities ahead. I decided to move (with a huge emergency fund) because I needed to put my happiness first and get outside my comfort zone. And I have no regrets about traveling because time with loved ones is priceless.

Don’t let debt run your life. Consider it when making decisions, but don’t let it have the final say. Be responsible with your money and know what path is best for you. If you’re happier putting every last cent of your earnings toward debt, then do that. If you’re happier saving for a future milestone while paying off your debt at a decelerated or “normal” pace, then do that.

Whatever you do, don’t dismiss it. Whether we like it or not, we have to accept the fact that debt is there, at least for the time being. But it’s possible to live your life and be happy despite that. Don’t automatically give yourself a prison sentence for a few years. Figure out how to get where you want to be regardless, and don’t give up hope.

Have you ever let debt hold you back before? How? Do you regret letting it stop you from living, or do you regret not prioritizing it? Do you think debt is an emergency?