5 Things I Miss About My Day Job

Posted on December 1, 2014 by John Schmoll in Self Employment, Taking the Plunge 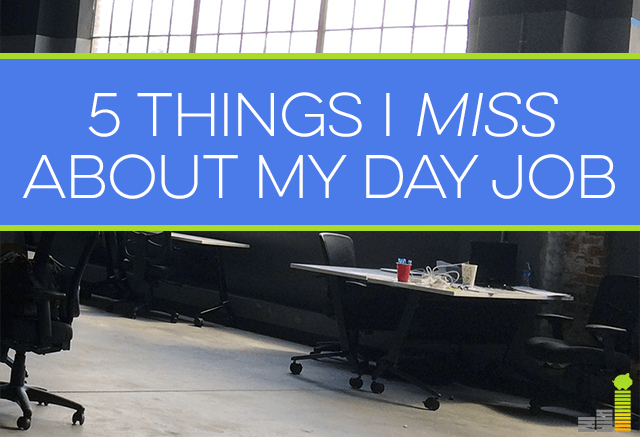 I don’t know what it is about us as humans, but we tend to think that the grass is always greener on the other side. It’s inevitable in my opinion. Things may be going great for us, or they could be going terrible. We see something else and we are tempted to think that it will be better than what we have. Of course, it might be the case that it actually is better but often times it’s not. It largely depends on the given situation I guess. Take working from home as an example. Before I started my own business, I always thought working from home would be a breeze and that there couldn’t possibly be anything I’d miss about working in an office.

Now that I work from home, I realize there are a few things I miss about my day job. I wrote a post a few months ago about things I don’t miss about working in an office and thought it would be a good exercise to go through what I do miss. I do that as it might be easy to see working for yourself as a life of luxury filled with puppies and lollipops, but it’s not.

Things I Miss About My Day Job

This is likely the thing I miss most about my former day job. While the meetings might have sucked, being able to collaborate with others on a project was enjoyable, generally speaking. I’m an individual who likes to take the big picture and help determine what’s needed to hit that end goal. My day job provided a way to scratch that itch at times. This is not to say that I don’t have that now that I work for myself, but I’ve found there is just something about physically working together on a project that helps take it to the next level.

I’m an introvert by nature. I’m not the life of the party that my lovely wife is and tend to prefer opportunities to connect with others in smaller settings. Now that I work from home the large majority of my social interaction is either digital or with the little Frugal Rules.’ I love my kids, I really do, but there’s not much in terms mental stimulation. Call me crazy, but discussions about Frozen do little to sharpen my mental acumen. 😉 Since I’m an introvert, this forces me to step out to further develop relationships. I think you could argue that that’s a good thing and I’d tend to agree. However, my day job provided a way to get that social interaction.

Ok, I know this is the obvious one. Who doesn’t miss a paycheck? It goes beyond that though. Getting a regular paycheck for a known amount meant I had a network to save for retirement, provide for health insurance, etc. That is simply not the case when being self-employed. Saving for retirement while being self-employed can be a challenge at best, and don’t get me started on the health insurance – as I’ve discussed it at detail before. The paycheck provided a felt sense of security. However, I’ve come to see that felt sense of security as a mirage in many cases. I’d much rather depend on my wife and myself to provide the income as opposed to a firm.

This sort of goes back to the social interaction aspect, but I miss that feeling you get of going to the office. There is just something about going in, putting in your time, physically working with others and getting your work done. That is not something I have now that I don’t have the stereotypical day job. However, like the felt sense of security with the paycheck I believe much of this is misplaced at times. When I look at my production level now against what I was able to accomplish in my former day job, I’m much more productive today. I also enjoy my work now more, so there’s something to be said for that. 🙂

The last thing I miss about my day job is the time aspect. I was somewhat privileged in that I didn’t have to bring much physical work home. The mental work is a different story. That meant I could typically leave around 5:00 and be done for the day. I loved this as it provided instant structure. The structure my day job provided is much more difficult to re-create now that I work for myself. That’s not to say that it’s not possible to have some sort of balance, just that it requires work, discipline and assessing priorities to reach any level of supposed balance. As I get older though, I’ve learned that we all make choices and that balance largely is comprised of that.

I don’t know if there is anything else I miss about my day job, but these are the main things that come to mind. Going back to the grass being greener at the beginning, I always dreamed about working for myself in running a business. I never thought it was possible and believed that those who had it were better off. Being at this for over two years now I see that it is indeed possible. You just have to want it and put in the work to get there. I don’t know that those who are self-employed are better off, but I do know that I’m much happier and thus much better for it.

Do you work for yourself? What do you miss, if anything, about your day job? If you work in a traditional office setting, what is your favorite aspect of it – minus the paycheck?