Posted on March 18, 2013 by John Schmoll in Random musings 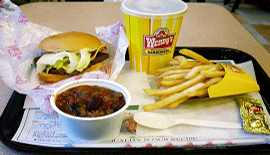 I am not one that typically likes to follow what the celebrities are doing or who broke up with who yesterday. To be honest, I don’t care about the latest Kardashian divorce either. (As an aside I can’t believe that I just mentioned the Kardashians on Frugal Rules; there IS a first for everything!) That said, I have always been intrigued by celebrities and the jobs they used to have before they got their big break.

Take for example, Matt Damon (one of my favorite actors) who was a breakdancer. I really don’t see him doing that, but maybe that explains why he did many of his own stunts in the Bourne movies. Another one that caught my eye was that Christopher Walken was a lion tamer. Now, that one, does not surprise me seeing some of his movie roles or his need for more cowbell.

Sadly my first job did not result in a big break, but I have had some interesting jobs. I’ve not always been a nerd who enjoyed working with numbers ad nauseam. Most of us have jobs that we worked in the past that we took to pay the bills or because we were in high school and just wanted a part-time job to get some spending money.

Some of these jobs might make you laugh, cringe, or wish you could forget altogether when you remember them. I have had a few of those jobs myself from working at a convenience store to working as a bank teller to working at several fast food joints. When you start seeing how the sausage is made (literally) you start to question why on earth so many eat there and how something that nasty could be addictive.

They’re addictive because they make it that way. Now, I am not trying to debate about obesity and fast food, but simply pull back the curtain on some of the practices that might make you question whether or not you want that bowl of fast food chili next time. Many of us would be better off staying home and eating in, choosing healthier options or even making our own juicing recipes than we would eating fast food.

Following are some of the things I learned while working in the fast food industry during my high school and college years:

What was one of your first jobs? Did any of my “confessions” make you cringe? Would you like fries with that?!